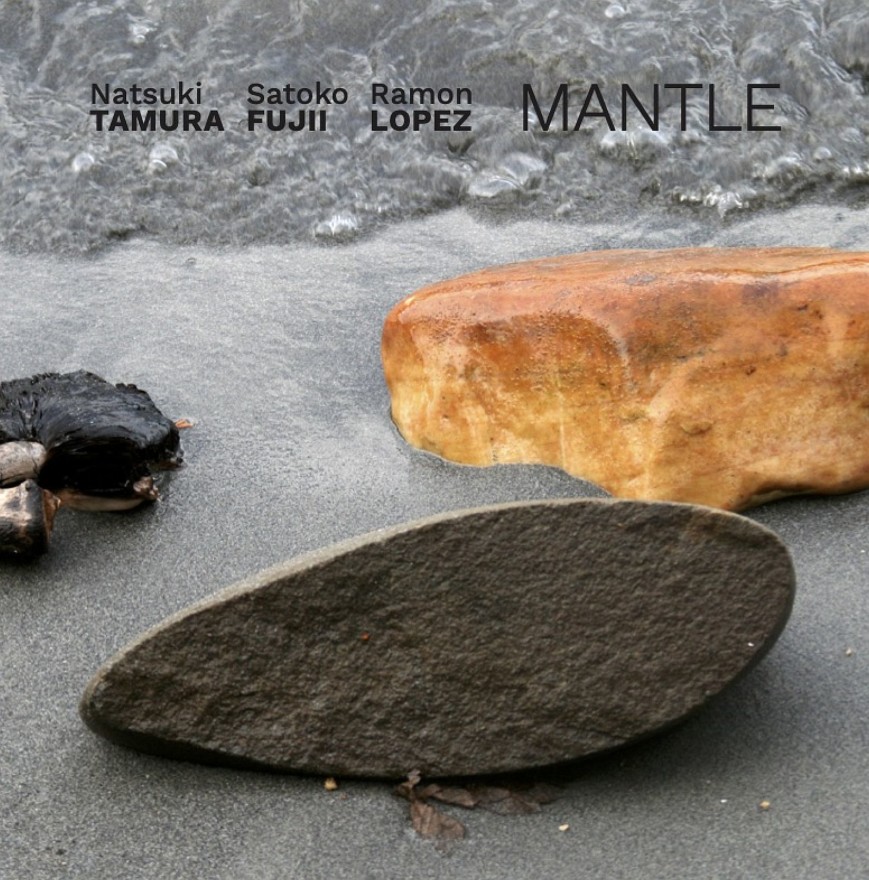 “Over the decades, Japanese pianist Satoko Fujii has demonstrated uncanny power and musicality as a considerable force in the avant-garde end of the jazz spectrum.”— Josef Woodard, DownBeat

“Lopez does a fine job of fusing genres and styles while dispelling those old rumors that drums are not musical instruments.” — Glenn Astarita, All About Jazz

On their debut release, Mantle , pianist Satoko Fujii, trumpeter Natsuki Tamura, and drummer Ramon Lopez challenged themselves. Working together for the first time as a trio, they not only developed themselves into a working ensemble, but they wrote music that explored the potential of the group, each piece pushing and inspiring them in a different way. The result is an album of unfailing surprise and invention played by a group that listens closely and responds to one another on a deep intuitive level.

The trio recorded at the end of a 9-concert tour of Japan in September 2019. “It was an incredible tour,” Fujii says. “We agreed at the beginning to each write one new composition a day for the group as we toured. So there were three new pieces at each concert and we developed a unique repertoire specifically for the trio. We were busy traveling, performing concerts, and composing on the road. All our compositions drew inspiration from the music we played in concert, from each other’s compositions, and the cities where we played. I didn’t even believe it was possible. But we pushed ourselves and had so much fun making the band sound grow. In the end we had 27 compositions (3 x 9 concerts)!”

The band sound was really a work in progress—they had never worked together as a trio before the tour. Long-time collaborators, Fujii and Tamura have no less than 7 duet albums to their credit. Critic Troy Collins in Cadence says, “Fujii and Tamura’s sublime interaction and loquacious dialogue embodies near telepathic perfection.” Their most recent duet CD, Pentas (NotTwo Records) is out on November 6 alongside Mantle. Fujii and Lopez released the critically acclaimed duet CD, Confluence (Libra), in 2018. In a review of the album in ArtsFuse, writer Michael Ullman said, “Fujii and Lopez are clear-eyed adventurers; this is free jazz that shimmers with inquisitive transparency.” The extra effort they put into the tour paid off by turning them into a boldly experimental, cohesive unit.

For the album, they picked their favorite nine pieces from compositions written while on tour—three by each bandmember. Perhaps that’s why the writing plays so well to the trio’s strengths, showcasing not only their individual voices but also their collective identity as a band. For instance, Tamura’s “Encounter” opens with a Lopez drum solo that displays his mastery of texture, phrasing, development, and dynamics. As each bandmate enters they add a layer to the music until a driving, soaring collective climax is reached. As the music rises and falls, they repeat the order of musicians joining in, but take the music to a new place each time. Fujii’s “Nine Steps to the Ground” likewise shows off different aspects of each player while building a tight group sound through an easy conversational give and take and an unforced flow of ideas. Lopez’s “Straw Coat” highlights the lyrical side of the group, with piano-drums duets interspersed between beautifully attuned full trio improvisations. Each composition provides a new insight into the trio and takes them on a different sonic journey of discovery. 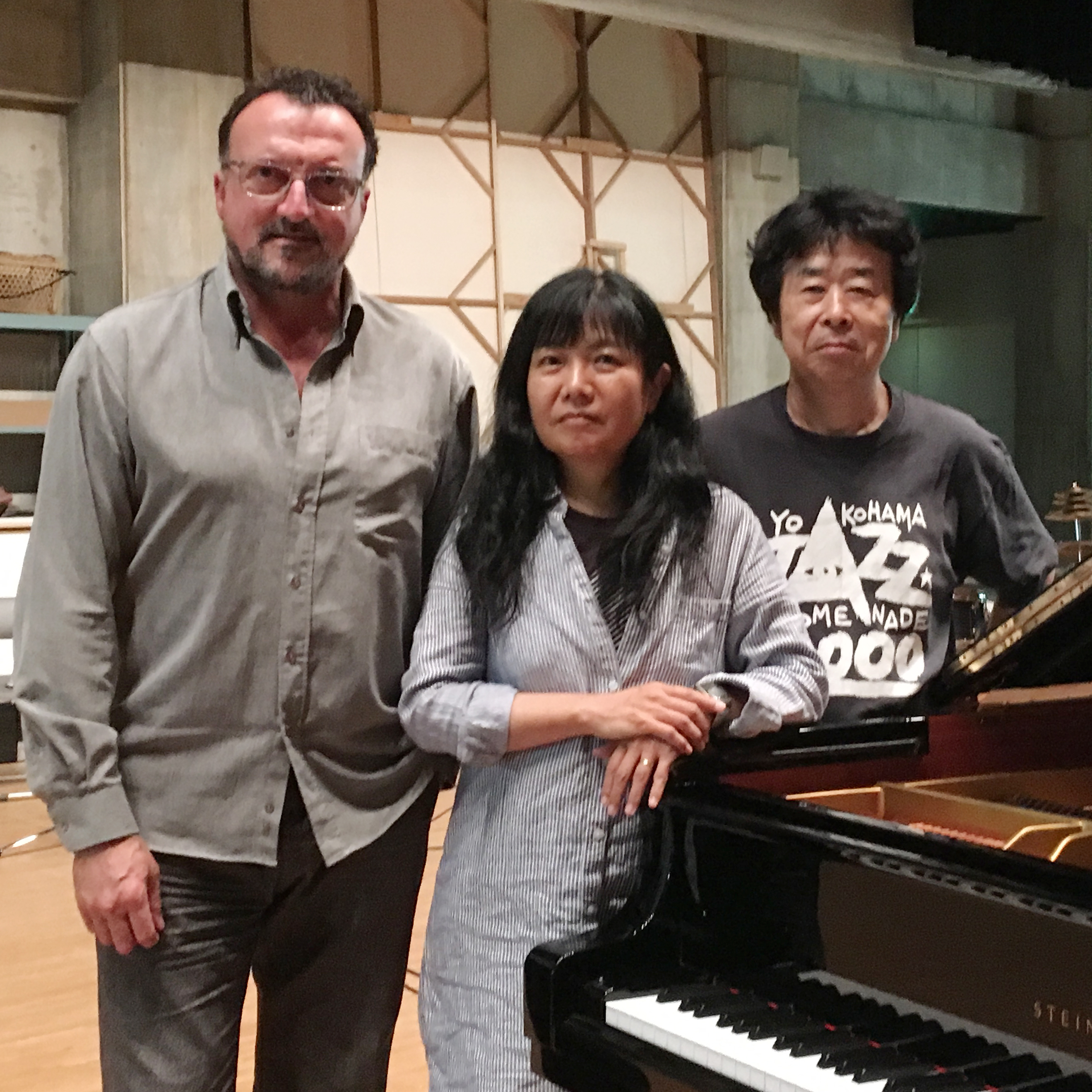 Critics and fans alike hail pianist and composer Satoko Fujii as one of the most original voices in jazz today. She’s “a virtuoso piano improviser, an original composer and a bandleader who gets the best collaborators to deliver,” says John Fordham in The Guardian. In concert and on close to 100 albums as a leader or co-leader, she synthesizes jazz, contemporary classical, avant-rock, and folk musics into an innovative style instantly recognizable as hers alone. A prolific band leader and recording artist, she celebrated her 60th birthday in 2018 by releasing one album a month from bands old and new, from solo to large ensemble. Franz A. Matzner in All About Jazz likened the twelve albums to “an ecosystem of independently thriving organisms linked by the shared soil of Fujii’s artistic heritage and shaped by the forces of her creativity.”

Spanish drummer, percussionist, and composer Ramon Lopez is a master of many styles. Besides his deep involvement in free jazz and improvisation, he studied tabla with Krishna Govinda K.C., and performed with some of the world’s leading flamenco artists. His first recording under his name, 11 Drum Songs (Leo Lab), an album of solo percussion, was released in 1997. From 1997 to 2000 he was drummer in the renowned French Orchestre National de Jazz under Didier Levallet. His musical endeavors have always been challenging, from his interpretation of songs from the Spanish civil war to his duos dedicated to Roland Kirk (2002). The French government named him Chevalier of the Order of Arts and Letters in 2008. Recently he’s had a fruitful association with English bassist Barry Guy, recording a duet with him, and appearing as a regular member of his Blue Shroud orchestra. In addition, he has recorded or performed with Joachim Kühn, Angelica Sanchez, Archie Shepp and many others.