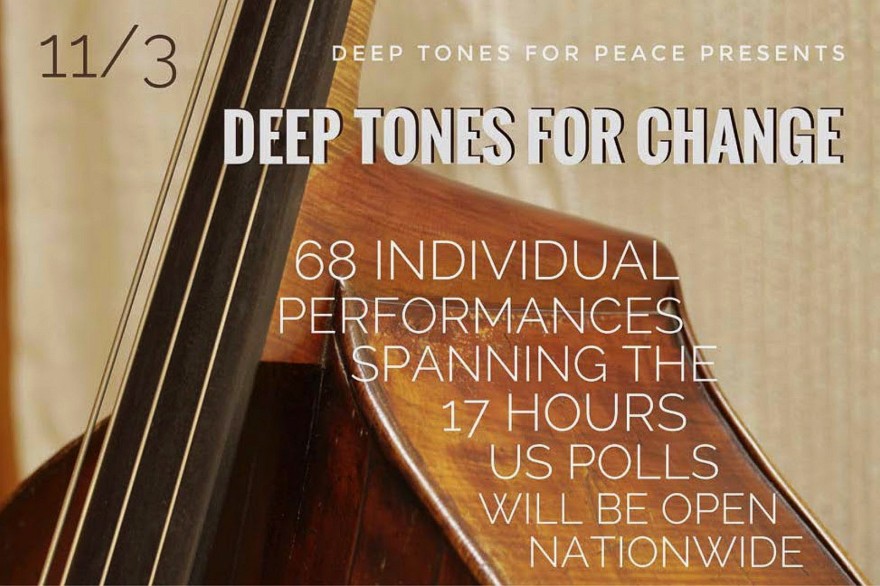 With the election so close, the division so fractious and potentially explosive, we feel a special event is needed for the public on Election Day. On November 3, ​Deep Tones for Change​ will transmit 4 performances each hour, spanning the 17 hours that US polls are open nationwide, from the East Coast to Hawaii – 68 individual performances!

Deep Tones for Peace ​is a musical initiative that originated in 2009 with a telematic performance between Jerusalem and Manhattan, and has continued with annual iterations until the present day. Deep Tones for Peace 2020 was launched by Mark Dresser and William Parker. A regular streaming of live meditations for peace, healing and transformation is delivered by musicians transmitting deep tones that can strengthen the unseen bonds of our diversity as we oppose economic, educational, and environmental inequities fueled by racism, sexism, and greed.

Contributors play for 5-30 minutes with the intent of musically sending healing vibrations to be felt worldwide. The call for participation is open to all bassists who wish to join in an ongoing musical transmission of vibrations for peace. Any style or form of music and any level bass player is welcome to help promote peace in the world. We truly believe this project will have a positive impact on the balance of life.

To date, the impact of the initiative has been far greater than anticipated, despite being non-monetized and publicized solely via word of mouth and social media. Since its first daily transmission on August 1, 2020, Deep Tones for Peace has broadcast more than 120 individual performances, and membership in the public Facebook group has grown to include nearly 2,100 members in more than 40 countries worldwide. Voluntary contributors have included celebrated artists John Clayton, Christian McBride, Rufus Reid, Robert Black, Marlene Rosenberg, Pablo Aslan, Kristin Korb, Bertram Turetzky, Christine Hoock, Thierry Barbé, Jorge Roeder, Katie Thiroux, Scott Colley and others.

Deep Tones for Peace is a public Facebook group – membership is open to everyone, and listening is possible for anyone via the link, whether a Facebook member or not: