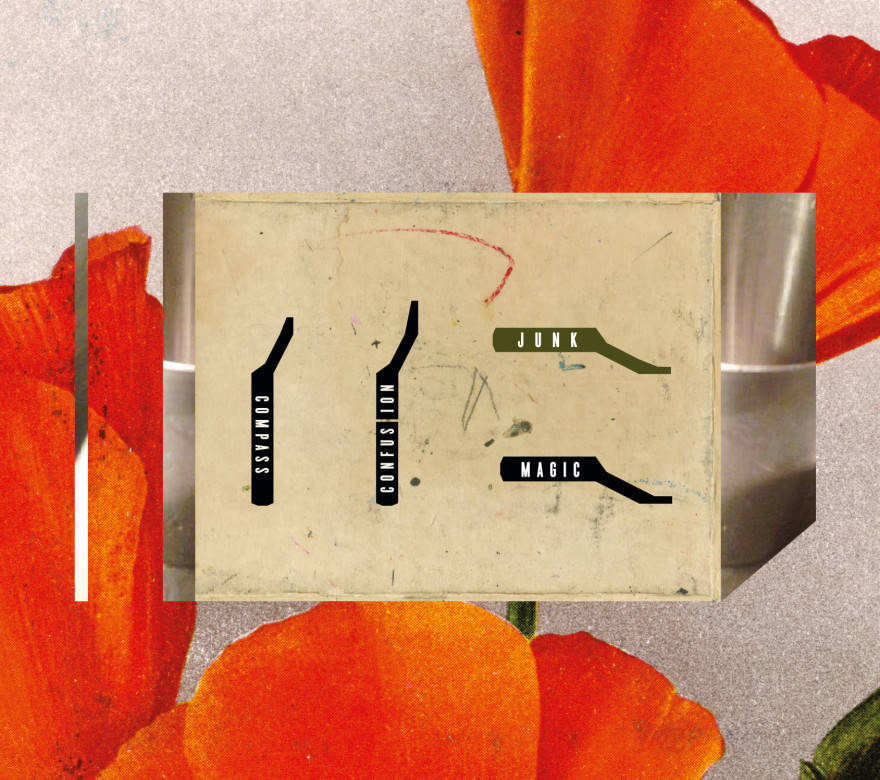 “Listen to the transfixing opening cut, ‘Laser Beaming Hearts,’ and in addition to Taborn’s aesthetic kinship with Detroit techno titan Carl Craig, you’ll be reminded of how many hours these improvisers have devoted, separately and in various configurations, to shifting the balance between abstraction and groove.” – Nate Chinen, WBGO

“Collages of dark and dirty parts, musical cast-offs, so to speak, that have been artfully reattached.” — Patrick Sisson, PopMatters

For more than a decade, Junk Magic has been honing a collective sound that relies on individual expressions, imagination and subversion. Appearing first as a 2004 album title under pianist-composer Craig Taborn’s name, Junk Magic has transitioned into a sonic identity comprising electronic sound design, production techniques and elements of improvised music.

Compass Confusion  presents a holographic snapshot of the Junk Magic sound. “Everything is warped by something else,” says Taborn, who serves as album composer and producer. “You’re still trying to capture things ‘in a moment,’ in a certain sense. But then also, because of how the process works, you’re not. There’s a lot of time to craft things after the fact.”

Compass Confusion features Chris Speed on saxophone, Erik Fratzke on bass, Mat Maneri on viola, David King on drums and Taborn on piano, keyboards and synthesizer. Together, they disarticulate boundaries that imply separation of live music and digital production. “I don’t really view using creative methods in ambient techniques as a ‘different side’ of musical expression,” says Taborn. “It’s all the same expression. But this album is definitely leaning in to the production process as opposed to relying more heavily on the live playing.”

Compositional and textural layers, as well as pacing and extended ebb and flow, emerge intentionally throughout the recording. The artists honor space. They harness movement through time. Using methods that challenge perception and embrace subversion, they develop sound narratives unique to each track that create a story arc across the entire album. The interplay’s the thing. “Laser Beaming Hearts” introduces a cast of characters, layering and mingling their identities, not only through sound design but melody.

“Whenever I hear a melody, it really does set up an identity, a character,” says Taborn, who seeks, at times, to subvert a character’s initial impact by elevating a textural element or an ambience. Often, that relationship inverts. First conjuring an ocean inside a seashell alongside echoing heartbeats, “Dream and Guess” soon moves into a new melody — beautiful, mysterious and primed for sonic disruption.

Rather than disorient — despite its title — the album constantly reorients the listener. Many tracks, including “The Science of Why Devils Smell Like Sulfur,” feature sound chambers, through which the artists freely move. Within these chambers, textures layer, flicker, persist, and stories develop; sound collage may enhance as melody recedes. “There are different methods of attending compositionally,” says Taborn. “If I were writing a traditional tune, it would be melody and some chord changes; if I were writing a hip hop track, I would focus more on beats, loops and sound design; ifI were writing strictly ambient music, I would focus on the sound relationships, how the shapes are evolving with certain sonic elements. On a lot of these pieces, I’m really playing with the foreground and background of all those things.”

While Taborn’s process serves a fixed vision, his approach preserves spontaneity. He populates each chamber by listening and responding to what he hears. “Each tune kind of has a radically different process,” he says. “I do think about narrative, because it moves through time, but it’s the narrative of these sound worlds, moving between them.”

The artists entered sessions in Minneapolis and Brooklyn knowing each studio hit would be one step of the process. Most of the album’s construction would come together away from mics and amps. Still, Taborn asserts an aesthetic throughout Compass Confusion that reflects his expansive foundation in live, improvised music. Deep admiration for hip hop and EDM production techniques notwithstanding, Taborn seeks to preserve solo performances artists throw down in the studio. “To a large extent, what you hear is what people played in the order that they played it,” he says. “I don’t cut up performances. And that’s not an ethos, it’s just an aesthetic. I’m not cutting up a drum solo and making loops, but I’m doing other things that might trick you into thinking it’s looped.”

Mixed and mastered in Taborn’s native Minneapolis by Brett Bullion (The Bad Plus) and Huntley Miller (Bon Iver, Kassa Overall), respectively, Compass Confusion presents a confluence of expressions within a collective sound. “We’re improvisers,” says Taborn. “While a lot of this material is written, there’s so much improvising in the playing. Even in my approach to making tracks, making beats in the studio, it’s still improvisational. You’re working on things in the moment.”