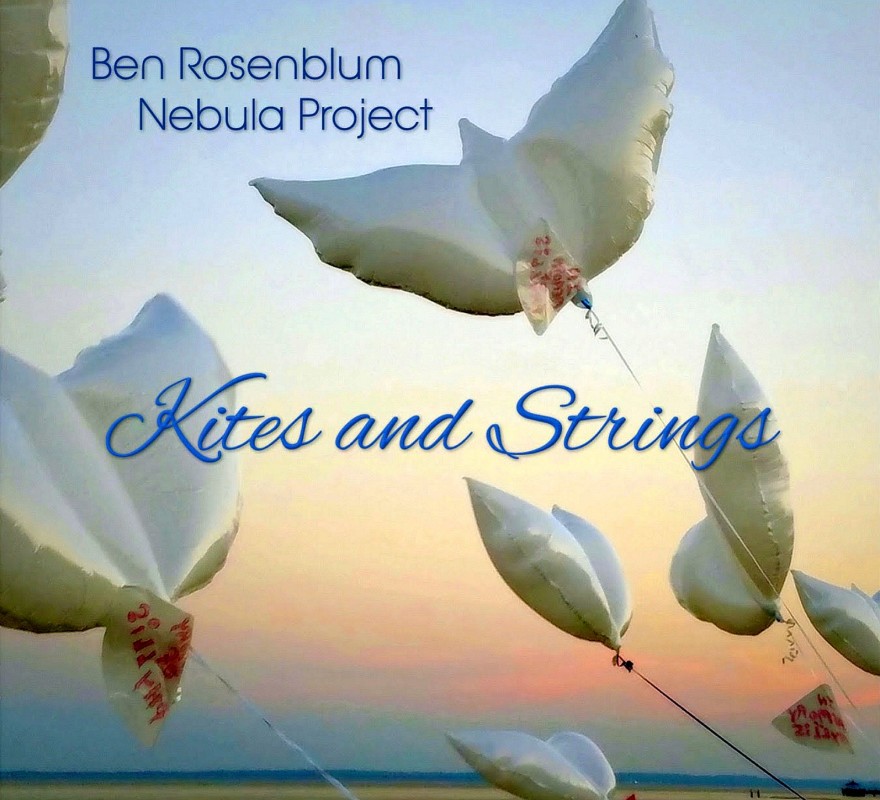 “A witty, skillful composer, the multi-instrumentalist leads his first full band outing in fine form with playing and writing that are second to none,” – Midwest Record

Ben Rosenblum doesn’t just invite a diverse array of influences into his music. While his projects reflect his potent and deeply rooted point of view, the pianist, accordionist, composer and arranger positively thrives on a thrum of contrasting approaches. With Kites and Strings, his third album as a leader and the debut of the Ben Rosenblum Nebula Project, he’s convened an exceptionally vivid cast of collaborators and provided them with a program of arrestingly beautiful pieces. Slated for release on October 16, 2020 via One Trick Dog, the album is the work of an artist who’s found that his voice contains multitudes.

Regularly employed by some of jazz’s most revered masters, Rosenblum has already established a national profile as bandleader by logging thousands of miles on the road, playing some 100 gigs annually with his trio at clubs, theaters, schools and community centers, and relishing the opportunity to bring jazz into communities where fellow musicians rarely play.

Kites and Strings features some of the most compelling young players on the New York scene including trumpeter Wayne Tucker, guitarist Rafael Rosa, Jasper Dutz on tenor sax and bass clarinet, bassist Marty Jaffe, and drummer Ben Zweig, with vibraphonist Jake Chapman, trombonist Sam Chess and pianist Jeremy Corren expanding the sextet on several tracks. “These are all great jazz musicians who are steeped in the music’s history, and they all have very different approaches to the music,” he says. “My bandleader heroes often worked like that. Think of Astor Piazzolla’s Tango: Zero Hour when he put together a traditional tango violinist, a rock-influenced electric guitarist, and a jazz pianist. I love seeing the way people’s different styles play off of each other and combine into something beautiful and unique.”

Encompassing rock and klezmer, Latin American rhythms and Bulgarian harmonies, Kites and Strings marks a major leap for Rosenblum as a composer/arranger. He gained widespread notice with his 2017 debut Instead (One Trick Dog), a confident trio session featuring drum legend Billy Hart and bass master Curtis Lundy that earned four stars from DownBeat Magazine. After holding his own with two revered improvisers he followed up in 2018 with River City (One Trick Dog), a trio with his rapidly rising contemporaries bassist Kanoa Mendenhall and drummer Ben Zweig. Kites and Strings introduces Rosenblum as a composer/arranger with a capacious palette of textures and voicings and firm command of form. The project also establishes him as the newest member of a small, extraordinary keyboard cadre made up of players equally expressive on piano and accordion, a talent-laden club that includes Gary Versace, Sam Reider, Rob Reich, and Rio de Janeiro-born Vitor Gonçalves, who’s a particular source of inspiration for Rosenblum.

The album gathers together compositions Rosenblum’s been developing over the past decade, opening with “Cedar Place,” a hat tip to the inestimable pianist/composer Cedar Walton. The propulsive bass line and one-chord vamp section bring to mind the deceptively simple elegance and forceful swing of Walton’s standard “Bolivia.” The buoyant title track bobs and weaves with a 7/4 pulse inspired by the effortlessness of odd-meter feels in Venezuelan merengue or Bulgarian hora, evoking the celebratory meter with interwoven lines by accordion, trumpet and vibes. The accordion also figures prominently in “Motif From Brahms (op. 98),” which borrows a dozen bars directly from the titular composer before some gorgeous piano work by Jeremy Corren (who’s been heard recently with vibraphonist Joel Ross).

Rosenblum originally intended “Fight or Flight” for the violinist Benjamin Sutin’s klezmer jazz combo Klazz-Ma-Tazz, and the piece just keeps adding diverting attractions after the circus-like accordion figure, with a snapping trumpet fanfare and distortion-tinged guitar solo. Another highlight is Rosenblum’s gorgeously orchestrated arrangement of Leonard Bernstein’s “Somewhere,” which recalls Lee Morgan’s rendition on the trumpeter’s posthumously released album, Standards. Corren digs into the bittersweet melody. “I knew Jeremy would shine on this,” Rosenblum says. “I love his playing on more melodic pieces. His voice leadings are unlike anyone else, and his supportive accompaniment frees me up to play the melody on accordion.”

Rosenblum turns Neil Young’s elegiac “Philadelphia” into an arresting jazz ballad, and gives the band an angular blues to stretch out on with “Laughing On the Inside.”  The album closes with Rosenblum’s arrangement of “Izpoved,” a piece he distilled from the beloved recording Le Mystere Des Voix Bulgares Vol. 2. Featuring Jasper Dutz’s thick, sinuous bass clarinet work, the piece captures the haunting, otherworldly quality of the all-women Bulgarian vocal ensemble.

In many ways Rosenblum’s welcoming aesthetic reflects his cosmopolitan upbringing in New York City. A Gotham native born on March 29, 1993, he earned a BA in philosophy from Columbia University while also studying piano at Juilliard in a joint degree program. But before he was out of high school he’d connected with his first mentor, esteemed Israeli-born pianist Roy Assaf. Knowing that the most essential jazz education is acquired on the bandstand, Assaf connected Rosenblum with first-call drummer Winard Harper who was just starting a new jam session in Jersey City to bring jazz back into his home community. “He had a small budget so he got young musicians like me for the house band, and that ended up being an incredible experience,” Rosenblum says. Assaf also connected him with veteran vocalist Deborah Davis, a veritable New York institution, who took him under her wing “and taught me so many tunes and how to accompany a singer,” he recalls.

Davis recommended Rosenblum to bassist Curtis Lundy, who became another invaluable mentor, “somebody who provided tough love in a way that was great for my development,” he says. “I needed to hear about getting my left hand together and being rhythmically solid, how to lead a piano trio, the importance of listening to certain recordings. I’ve been so fortunate in getting to play with these masters. I also received some beautiful instruction from Bruce Barth at Columbia and Frank Kimbrough at Juilliard. I continue to learn the most playing with other people. I’m surrounded with great young musicians who are never shy about telling me if they hear something different.”

Nebula showcases a dazzling cross section of rising New York talent. Trumpeter Wayne Tucker, who delivers consistently crackling work throughout Kites and Strings, has been touring with vocalist Cyrille Aimée recently. He and Puerto Rican guitarist Rafael Rosa, who’s part of the brilliant wave of Latin American musicians transforming the New York scene, are a few years older than Rosenblum and were shaped by a different peer group. “Wayne has a ton of experience in jazz and also in the R&B/hip hop world, and he’s bringing in that musical attitude. His swing is more laid back. I love pairing him with Jasper, who studied with Walter Smith III and is more classically minded. He’s got a deep relationship with the bass clarinet. I love how different they are, yet how committed they are to the blend.”

The group is built upon Rosenblum’s working trio with bassist Marty Jaffe and drummer Ben Zweig, whom Rosenblum has toured with throughout the United States and internationally for several years. They are a highly sympathetic unit that renders any time signature with a relaxed flow. “I love playing with them so much,” he says. “They’re willing to be as adventurous musically as I want to be. I’ve never been a hyper-specialist. I want to explore a lot of different styles. The two of them have such a deep knowledge of traditional jazz and hard bop and how to swing, but they’re willing to spend the hours to learn about, say, Brazilian music in a deep way.”

Best known as a highly adaptable pianist, Rosenblum started to focus on the accordion about five years ago. He studied with Vitor Gonçalves, and the dearth of jazz accordion players meant that he “received opportunities that really pushed me to get better on the instrument,” he says, like touring around Europe with New York-based Croatian jazz vocalist Astrid Kuljanic. A weekly Manhattan gig with her band featuring the great Brazilian percussionist Rogério Boccato allowed him to begin to fully explore the instrument and start thinking about it compositionally. “The accordion introduced me to all kinds of international styles – South American, klezmer, Romanian, and Irish music,” he says. “I subbed in the pit for Fiddler On the Roof, which really got my accordion chops up. It’s always a work in progress, and I’m having a great time with it.” 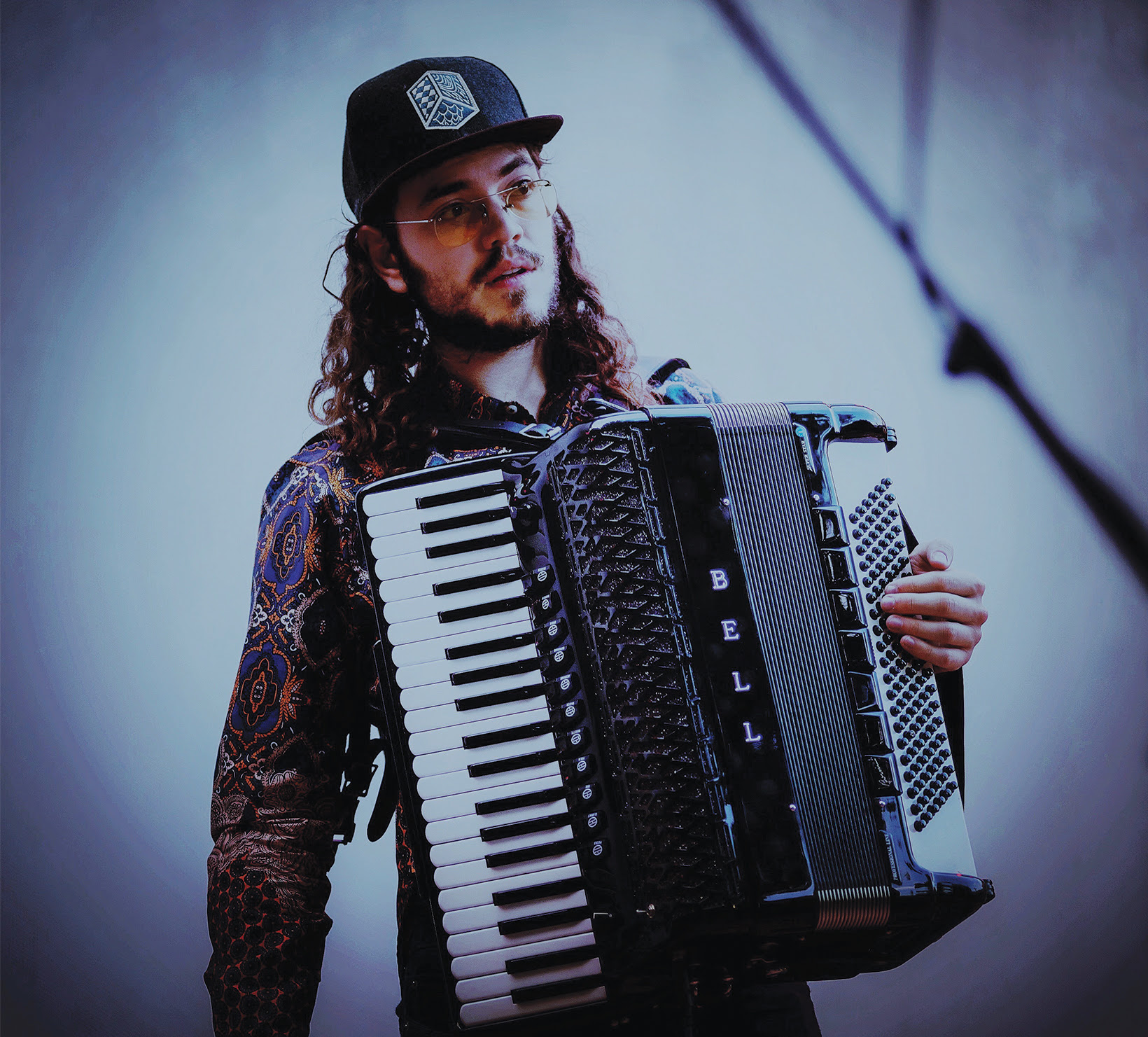 The pleasure the musicians take in each other’s company comes through bright and clear on Kites and Strings. It’s like one of those famous New York parties where you never know who’s going to walk through the door or what’s going to happen next. And you’re invited.

• Wednesday, November 18 at noon EDT – Livestream concert for Music at Southminster in Ottawa.  Tune in at https://www.facebook.com/MusicatSouthminster/

• Select Tuesdays at 7:30 p.m. beginning on 10/27 streaming with Jasper Dutz.  Tune in on Jasper’s Twitch channel at https://www.twitch.tv/championshogo.