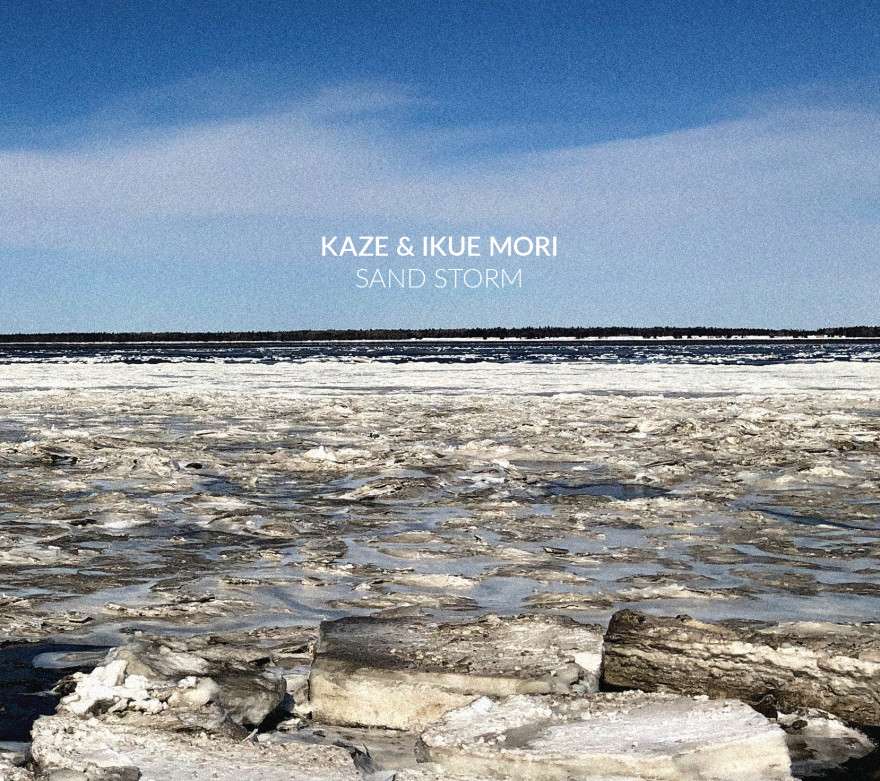 “Intense and playful, down-to-earth and international, Kaze communicates in a musical language of contrasts and continuity.” —Virginia Schaefer, JazzTimes

“If you think you can imagine what piano, drums, and two trumpets will sound like, think again.” ― Derk Richardson, KPFA Radio

On  Sand Storm  , Kaze – the cooperative quartet featuring Japanese composer-pianist Satoko Fujii and trumpeter Natsuki Tamura along with French trumpeter Christian Pruvost and drummer Peter Orins – welcomes pioneering laptop player Ikue Mori as a special guest. It’s no easy task for a band that’s been together for 10 years to add a player without upsetting a well-developed group balance, but the merger proves to be a natural one.

Sand Storm’s vibrant collective improvisations and brilliant soloing make this a high-point in the life of the band. “I knew Kaze would sound great with Ikue,” says Fujii, “but I have to say it turned out even better than I imagined it would. She brought fresh, new sounds to the band and a very strong feeling.”

For Fujii, Mori was a natural choice for a special guest. “While Kaze was on tour in Europe in spring 2019, Peter got an offer for us to play at the Sons d’Hiver Festival in Paris in January 2020,” she remembers. “They also said we could invite a special guest. When I heard this, I had this strong feeling that Ikue would fit great in the group. I could feel it. It is hard to explain, but I knew it would work. I told Peter and he loved the idea.”

A one-week tour in Austria, France, and Russia was set up for early 2020 and Fujii’s intuition proved correct. “We only had one short rehearsal right before our first concert in Vienna, but we knew immediately that the music would be great,” she says. “We were all so comfortable. We hadn’t planned on recording together, but we really wanted to after the tour.”

Sand Storm is the result of that collective enthusiasm generated by the tour. From the opening swirl of granular sounds on Pruvost’s “Rivodoza” (a Malagasy word for “hurricane”) that hits the listener with coordinated intensity, it’s clear this is a deeply attuned quintet. The subtle little details, rapidly changing timbres, and the ease with which everyone interacts indicate a group in which each member is selflessly dedicated to creating vivid, organic improvisations. Similar passages of highly musical sound abstraction also highlight “Kappa” and “Noir Soir.”  Three short collective improvisations also showcase their strong intuitive bond as a group. Their command of extended techniques for their respective instruments often makes it’s hard to tell whether a sound is acoustic or electronic.

“I love playing with both Kaze and Ikue because they think of the music first, not themselves,” Fujii says.

Critics and fans alike hail pianist and composer Satoko Fujii as one of the most original voices in jazz today. She’s “a virtuoso piano improviser, an original composer and a bandleader who gets the best collaborators to deliver,” says John Fordham in The Guardian. In concert and on nearly 100 albums as a leader or co-leader, she synthesizes jazz, contemporary classical, avant-rock, and folk musics into an innovative style instantly recognizable as hers alone. A prolific band leader and recording artist, she celebrated her 60th birthday in 2018 by releasing one album a month from bands old and new, from solo to large ensemble. Franz A. Matzner in All About Jazz likened the twelve albums to “an ecosystem of independently thriving organisms linked by the shared soil of Fujii’s artistic heritage and shaped by the forces of her creativity.”

Trumpeter and composer Natsuki Tamura is internationally recognized for a unique vocabulary that blends extended techniques with touching jazz lyricism. This unpredictable virtuoso has led bands with radically different approaches throughout his career. He’s played avant-rock jazz fusion with First Meeting, the Natsuki Tamura Quartet, and Junk Box. Since 2003, he has focused on the intersection of European folk music and sound abstraction with Gato Libre. He also has recorded three albums of solo trumpet. A member many of Fujii’s ensembles, he has recorded 7 duet CDs with her.

Peter Orins is a French drummer and one of the founders of the Muzzix collective. He’s developed his playing over the years, performing in various jazz bands in Lille since the early 90’s, and participating in experimental and improvised music projects. In addition to serving as an artistic director of Muzzix and helming the record label Circum-Disc, he leads several bands including Toc, Abdou/Dang/Orins, and Wei3. Among the musicians he plays with, both inside and outside the Muzzix collective, are Dave Rempis, Sophie Agnel, Didier Lasserre, Joke Lanz, Jasper Stadhouders, Petr Vrba, Maciej Garbowski, Jarry Singla, and Didier Aschour, among others.

Insatiable innovator of the whole sound spectrum of the trumpet, Christian Pruvost developed a very poetic and personal language for his entirely acoustic expedition. He is involved in collaborations as much in jazz as in creative and experimental music (founding member of the Muzzix and Zoone Libre collectives). In perpetual research on horns and pipes as well as different resonators and their transformations, he performs free improvisation and contemporary music with many artists in France and on all continents. He is a member of several ensembles and collectives such as Muzzix, Dedalus, Ensemble UN, Organik Orchestra, The Bridge, Ouïe Dire, and Ensemble 0, among others.

Ikue Mori arrived in New York in 1977 and started playing drums in the band DNA. In the mid 80’s, she started playing drum machines and got involved in the downtown improvising community and she has since collaborated with numerous musicians and artists throughout the US, Europe, and Asia, while continuing to produce and release her own music. Ikue won the Distinctive Award for Prix Ars Electronics Digital Music in 1999 and shortly after started using a laptop computer to expand her vocabulary not only to play sounds but create and control the visual work. She received a grant from the Foundation for Contemporary Arts in 2006, and an Instant Award for improvising music in 2019.