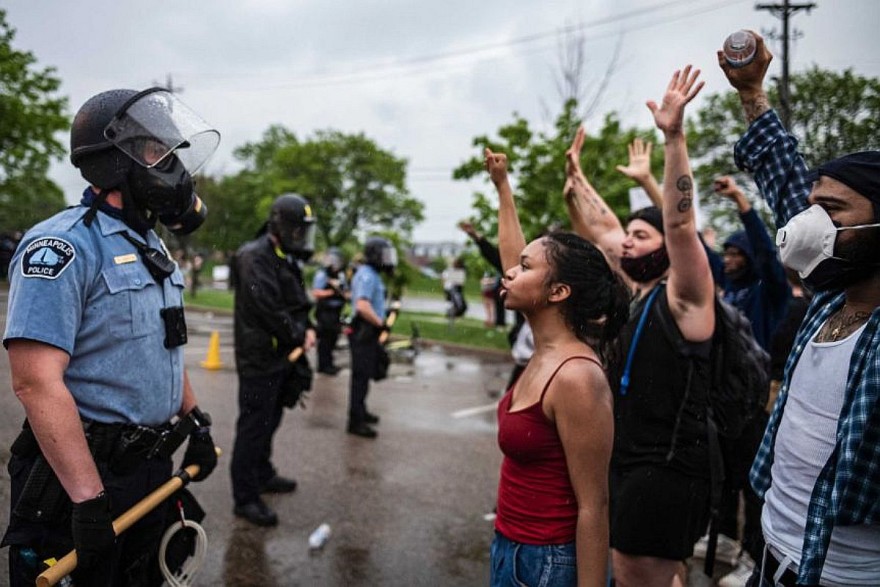 Today I have got email from my colleague journalist and music promotor Ann Braithwaite, sharing with me and other co-writers  very personal statement made by multi reed player  Scott Robinson. It was too strong to not respond and vent out my own feelings after reading , watching and feeling it. I think that America is in the very special moment now and the reaction around the country with the series of riots & protests which spread around the globe after murder of Citizen George Floyd on Monday, May 25, 2020 by Minneapolis police shows it: ENOUGH is ENOUGH !

He was unarmed. A white police officer put his knee on George Floyd’s neck for 8 minutes and 46 seconds, while Floyd called out “I CAN’T BREATHE” over and over again until he died. The tragic murder of George Floyd is just the latest example of racism in USA committed by  law enforcement, and it has gone on so long that it is accepted and seen as normal. I am not here to convince you of what your opinion on this should be, but I hope you look around at everything that is going on so you can form one. Be informed, be vocal, don’t be afraid to speak out about how do you feel.

I do remember my feelings in 2014 when the same had happened to another innocent citizen, New Yorker Eric Garner , on July 17, 2014 I remember it well as it came back to me a year later, when the scandalous murder had been wiped under the carpet by the then administration.  It came to me by Terence Blanchard’s recording and the title song Breathless, here is what I wrote back in the time about:

” …. it brings us to another check point. Here it becomes clear that this rebellious project is not made for fun and dance only, but it also carries a much more serious message. The title originates from the tragic story of Eric Garner, the alleged victim of brutality by USPD and his now worldwide recognized words “I can’t breathe “. That makes it involved in an entire human movement which this tragedy triggered and which is a part of today’s American fight for equality and freedom … “

Now, we are five years later, the same happen multiple times in between ( let’s use Michael Sabbie as an example) and nothing had changed for better. I hate to say that, but it seems not to be the trump fault only, I hate this KuKluxKlown, FauxNewsKing and the ConMaster, just to say to be perfectly clear on that. I believe that every decent human being does feel the same, but we need to face the fact that America had THIS problem way before DONtheCON had been set in the office and still refuse to sort it in the right way. Just like the other main problem with the Gun Lobbing and the mass shootings which are taking lives even more innocent random victims every years with statistics heading above the roofs and beating the worldwide murders all together by miles. Fact that we are going through the worldwide pandemic in the same time, which again is mishandled with an equal incompetence, ignorance and disrespect for human life makes is outspokenly tragic.

Lets’s give the voice to Scott after my maybe a bit to long , but I feel  – necessary introduction:

I truly miss sharing music with all my wonderful friends, fans and colleagues. These are difficult days, in so many ways. As a result, I have been making and posting some videos. I hope that if you can find a quiet moment, you will check out my most recent one. It has been posted on youtube (https://youtu.be/OnJfMd9bzdE) and on facebook (https://www.facebook.com/ScienSonic/), as well as in the Sound-of-the-Month Club for Laboratory Members.

This is a new kind of statement for me… a type of thing I have never done before, physically or artistically. I hope you can give it your attention, also my accompanying text (pasted below). Before I go, I would like to share one little story for your consideration:

Sometime in the late 1990s, I got caught trying to pay my electric bill with a counterfeit $100 note. The man at the counter thought it looked suspicious, so he made a few calls and checked some numbers against a database. “I thought so,” he said, and then proceeded to deface the bill, mark it counterfeit, and fill out a report. I just stood there in shock until he was finished, whereupon he handed me a copy of the report and said, “I’m sorry, but you lose $100 today”… and then I was free to walk out and go home. It was never assumed that I was guilty of any crime, or even knew the bill was a fake (I had absolutely no idea, of course). Nobody called the police that day, nobody arrested me or pushed my face into the road. Nobody killed me.

And that was a hundred dollar bill, not just a twenty.

Just something to consider.

I doubt I’m the last musician (and maybe not the first) who’ll want to create a musical piece of eight minutes and 46 seconds duration, the exact length of time it took for a man’s life to ebb away on that horrifying video we have all seen in the news. After I first saw some of that footage, I wept trying to describe it to my wife. I was extremely disturbed by what I saw.

Soon after that, the protests began, and they have continued. When I finally heard on the news the astonishing amount of time that actually elapsed while that man – and many bystanders – pleaded in vain for his life, I knew I had to memorialize that number somehow. How long is eight minutes and 46 seconds? Very late last night, I dressed in black and went out to my Lab to make this video. It was done in one take. All of the flaws and struggles you hear should be considered a part of the piece.

This is something I’ve never done before: a protest piece. It was not fun to make, and is probably no more fun to listen to. Nor should it be. The statement I want to make with this is not only about one man, or one police officer… or even about that one issue, large as it is. There is so much that is wrong right now, so much to cry out about. So much killing. The senseless, ongoing killings of black people. The endless parade of mass shootings in our schools, churches and workplaces. The gang violence in our cities (yesterday saw the confession of a 13-year-old involved in a murder in Central Park). The killing of our forests, our species, the rich and beautiful abundance of life on this amazing world we’ve been entrusted with. And now the coronavirus is killing us, 100,000 of us, some of my friends and colleagues among them. Meanwhile we find ourselves in this time of anguish, of multiple crises and emergencies, being presided over by a selfish, spoiled child who cannot possibly lead, unite or heal, because he fundamentally does not understand or believe that other people are actually real.

We have so much to learn… but some of us aren’t even in school.

I am sorry if any of this comes across as self-indulgent, melodramatic, or offensive to anyone. Please forgive me if it does. This is not about me. I simply felt compelled to make this statement. Silence is complicity. Now I will return to making music for the pure love and joy of sound.

There is one more thought I would like to share. I’ve never done anything like this before, and wasn’t sure I could get through it. By the end I was shaking, and some desperation was starting to creep in. But there came a moment, when my timer showed about 1:20 remaining, that I realized I was going to make it. Sadly, that moment never came for George Floyd.