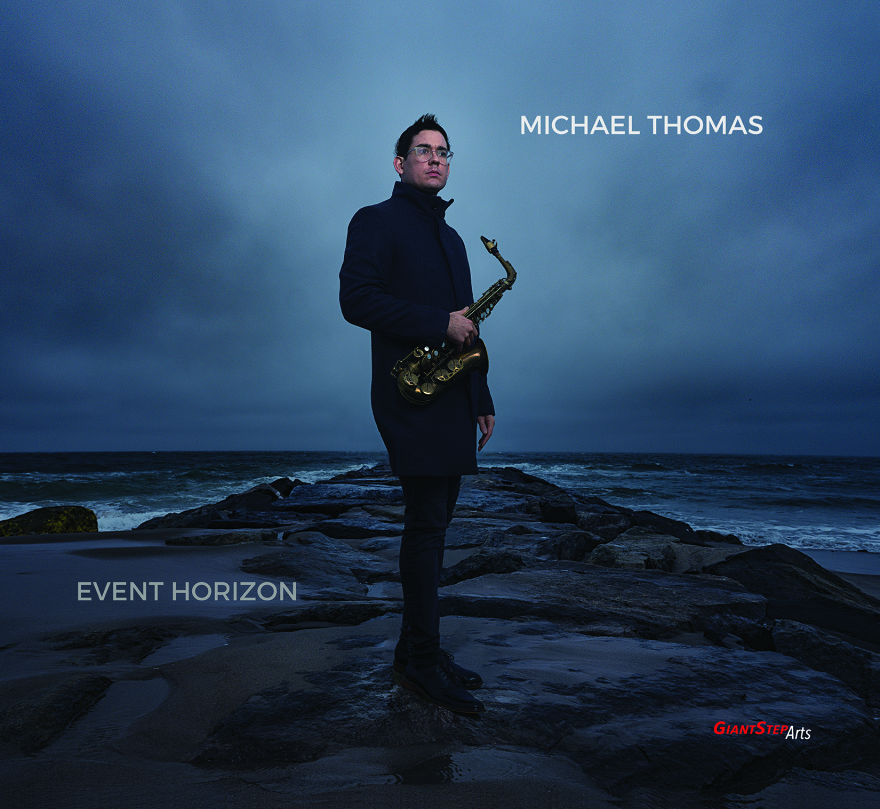 “Michael Thomas is a badass. Anyone who doubts it should go to ‘Sax Intro,’ a four-minute cadenza with maniacal runs in towering arcs and torrents of scales upon scales. It sounds perhaps like an alto saxophone virtuoso practicing, except that Thomas shapes it all into a spontaneous symphony. Then, after this wild celebration of chops, he segues seamlessly into ‘Chant’ and into what this album is truly about: daring, in-depth collaborative ventures based on Thomas’ intelligent compositions, conducted by a formidable chordless quartet of trumpeter Jason Palmer, bassist Hans Glawischnig and drummer Johnathan Blake.” – Thomas Conrad, New York City Jazz Record

In astronomical terms, an event horizon is a point of no return. The boundary at the edge of a black hole, where gravitational forces are so powerful that even light can’t escape, it’s a border verging on mysterious, unexplored territory.

“Getting invited to do a project like this is kind of like winning the jazz lottery,” Thomas says. “It’s a once in a lifetime experience to work with Jimmy, who goes out of his way to do everything right. He makes sure the band is taken care of, he hires the right people, he takes care of all the details; all you have to do as the bandleader is worry about the music. It’s an incredibly freeing experience.”

Thomas responded to this unprecedented opportunity by assembling a dream band to realize a new set of outstanding compositions. The front line reunites him with trumpet great Jason Palmer, who recently released his own second album for Giant Step Arts and with whom Thomas worked regularly for two years as part of Palmer’s long-running house band at Boston’s historic Wally’s Jazz Café. The quartet also features Miguel Zenon Quartet bassist Hans Glawischnig and drummer Johnathan Blake, whose exhilarating album Trion was among Giant Step’s inaugural releases. Creating such once-in-a-lifetime opportunities for artists, freeing them from the usual demands of record label and sales chart expectations, is precisely why Katz founded Giant Step Arts.

Recorded live over two nights at New York City’s renowned Jazz Gallery, Event Horizon muses on the role technology plays in modern life while responding to both its advantages and its drawbacks. “The music on Event Horizon represents the many ways technology impacts our lives on a daily basis,” Thomas explains. “In modern society, it has become necessary to rely on devices such as computers and smartphones, but this dependence often becomes a distraction and creates more distance between people as human interactions are increasingly diminished. The compositions on this album are intended to not only highlight these issues, but to also re-humanize the music making process by creating space for each player’s individuality, and to capture the magic that happens when these voices interact in a live setting. With these ideas in mind, it is my hope that I can inspire people to reconnect with one another and the world around them, and by doing so, that modern society can escape the event horizon we are faced with because of our technological dependence.”

The live recording cast this uneasy relationship with technology into stark perspective. While a studio may offer any number of modern conveniences, Thomas felt the old-school method, while inevitably a tightrope walk, also inspired daring performances that might not have happened with a safety net in place. “All the classic recordings we love were recorded in a similar way to this, where the band is just being the band and somebody documented it. But while we recorded in an old-fashioned way, I didn’t want the music to have an old-fashioned feel. This is very new music – challenging for the band, and challenging for the individual players.”

Katz founded Giant Step Arts in order to support artists like Palmer, Blake and others whose talents he felt had not been sufficiently recognized or supported. Thomas is a slightly different case, a less established talent at the outset of a promising career. Not that he doesn’t already boast impressive credentials: since his debut album, he’s appeared on more than 30 recordings and co-founded the Terraza Big Band with bassist Edward Perez, releasing the ensemble’s heralded debut, One Day Wonder, in May 2019. But Katz impressed upon the gifted saxophonist the ambitious expectations he holds for the artists who record for GSA.

“Look at the other saxophonists who have recorded on Giant Step Arts projects,” Katz points out. “Chris Potter, Mark Turner, Eric Alexander – some of the greatest players on the scene today. The truth is I’m looking for someone who really wants to step up their game and show the highest level of creativity in their art. Michael is capable of extraordinary things, and I’m really happy with how committed he was to this project and to making a bold new statement.”

That may the only demand Katz makes on the artists he works with, but it’s a tall order indeed. “I want to be sure everyone involved is trying to make a masterpiece,” he insists. “The goal on each one of these projects is to make a modern A Love Supreme or a modern Kind of Blue. Obviously those are very high standards, but we’re going into each one of these projects with that as the goal. I’m not interested in professional performances; I’m interested in performances that history is going to remember.” 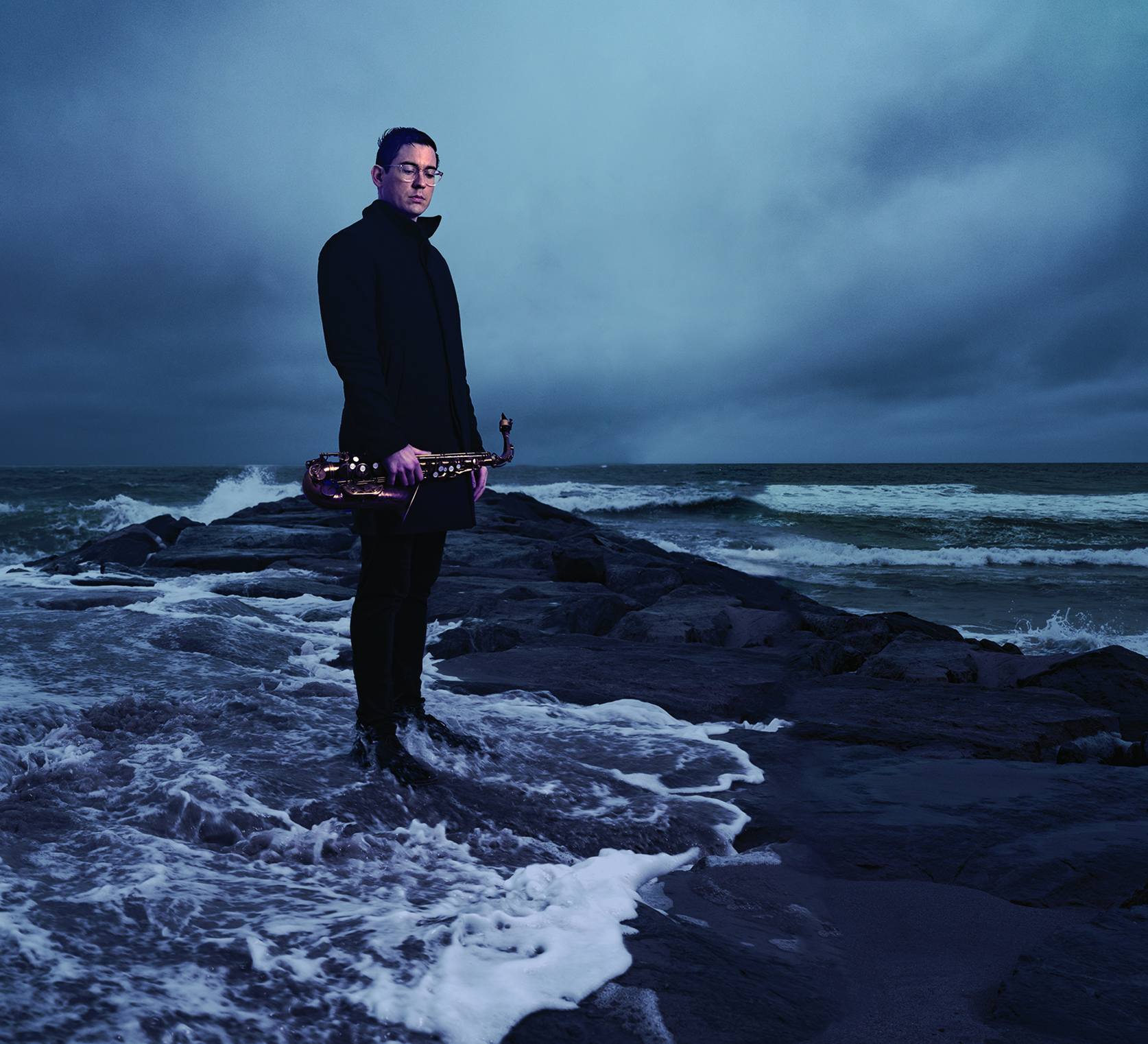 Grammy-winning saxophonist, composer, and arranger Michael Thomas has been an active member of the New York City jazz community since arriving in 2011. Holding degrees from the University of Miami, New England Conservatory, and The Juilliard School, Michael has performed throughout the United States and abroad, including tours in Central and South America, Australia, Europe, Japan, and Russia. He has appeared as a sideman with Brad Mehldau, Dafnis Prieto, Nicholas Payton, Miguel Zenón, Etienne Charles, and Jason Palmer, and Michael’s talents can be heard on over 30 recordings. As a composer and arranger, Michael has been commissioned by school and professional ensembles throughout the United States, and he is currently a member of the BMI Jazz Composers Workshop in New York City. Since 2015, Michael has co-led the Grammy- nominated Terraza Big Band, and the ensemble’s first album, One Day Wonder, was released in May 2019 on Outside In Music. Michael’s work has been recognized by DownBeat magazine as well as the “Keep an Eye” competition in Amsterdam, NL, and in 2016 he was a winner of the New York Youth Symphony’s First Music commission series. Since September 2018, Michael has been on faculty at the University of Hartford’s Hartt School of Music as an Artist Teacher of jazz saxophone in the Jackie McLean Jazz Studies Institute.

Founded by renowned photographers Jimmy and Dena Katz in January 2018, Giant Step Arts is an innovative, artist-focused non-profit organization dedicated to commissioning and showcasing the work of some of modern jazz’s most innovative artists. In an era where it is increasingly difficult for musicians to earn a living, Giant Step Arts offers the artistic and financial resources to create bold, adventurous new music free of commercial pressure. Musicians have total control of their artistic projects and Giant Step Arts is committed to fostering their careers by providing promotional material and publicity services.

For the musicians it chooses to work with, by invitation only, Giant Step Arts:

“Giant Step Arts does not sell any music,” Katz says. “Our goals are to help musicians make bold artistic statements and to advance their careers. We are also trying to increase our funding so we can help more musicians.”

Through his award-winning photography with wife Dena Katz, and his esteemed work as a recording engineer, Katz has spent nearly 30 years helping to shape the way that audiences see and hear jazz musicians. Katz has photographed more than 550 recording sessions, many historic, and over 200 magazine covers. Whether taken in the studio, in the clubs, on the streets or in the musicians’ homes, his photographs offer intimate portraits of the artists at work and in repose and capture the collaborative and improvisatory process of jazz itself. Recipient of the Jazz Journalists Association award for jazz photography in both 2006 and 2011, Katz’s work has been exhibited in Germany, Italy and Japan. Among the world-renowned artists he’s photographed are Sonny Rollins, Keith Jarrett, Ornette Coleman, Freddie Hubbard, Roy Haynes, Cassandra Wilson, Ray Charles, Dave Brubeck, Quincy Jones, Herbie Hancock, Wynton Marsalis, John Zorn, Pat Metheny, and Dizzy Gillespie. In addition to his well- known visual art, Katz is an esteemed recording engineer who has worked with artists including David S. Ware, Joe Lovano, Harold Mabern, William Parker, Benny Golson, and Chris Potter, among others.