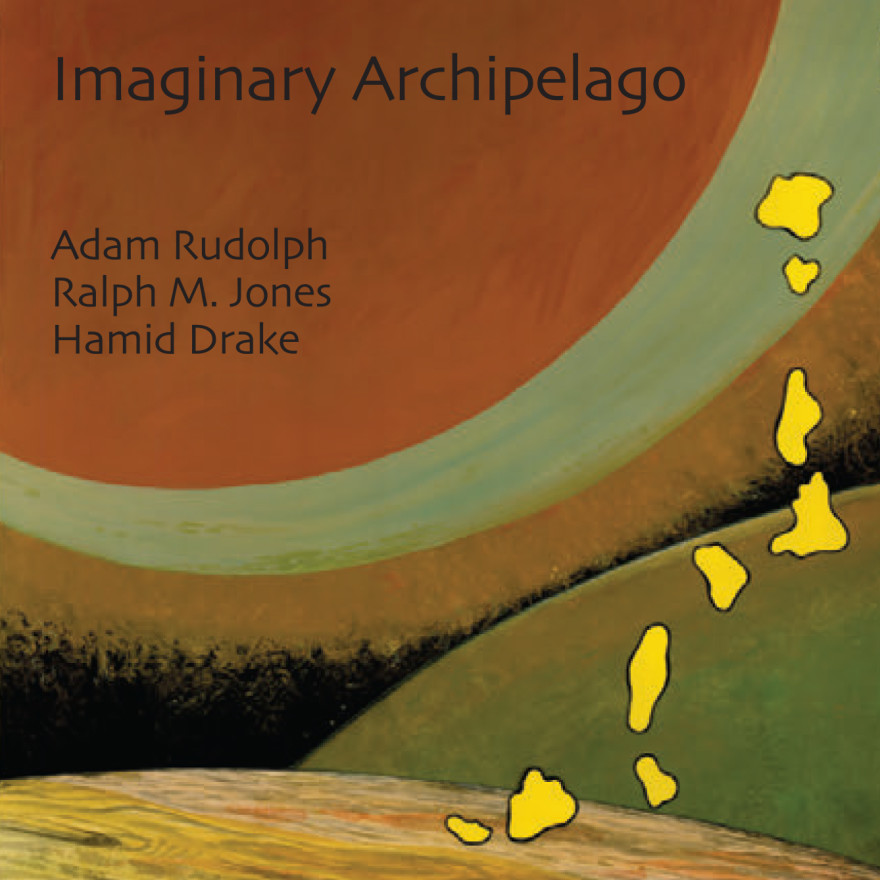 Imaginary Archipelago is a breathtaking set of non-idiomatic, spontaneous compositions that brings vivid new meaning to the bridging of “ancient” and “future” musical concepts: the influence of ancient traditions, real and imagined, imbuing the utterly modern technology and techniques. Recorded at Firehouse 12 in New Haven, CT, the original improvisations reflect a profound chemistry developed through collaborations that have lasted and deepened for decades yet constantly reveal new and surprising discoveries. Rudolph’s inventive post-production then sculpts that source material into evocative soundscapes that illustrate the journey of discovery that he describes in his liner notes. This bold, experimental approach is an undercurrent that runs throughout Rudolph’s diverse career, as well as that of his trio mates. Imaginary Archipelago arrives on the heels of the percussionist’s most ambitious and acclaimed release to date: Ragmala: A Garden of Ragas

Imaginary Archipelagos is a far more intimate affair, though no less innovatory. “With every record I make I try to do something that I’ve never done before,” says Rudolph. “I’ve always studied music from all over the world, so I had the idea of inventing some music that was previously undiscovered, which represents the idea that the creative endeavor itself is about discovering and uncovering something new.”

The close personal and musical relationship between Rudolph and Drake dates back to 1969, when the two met in a downtown Chicago drum shop at the age of 14. In the decades since they’re worked together with such greats as Don Cherry, Fred Anderson, Pharoah Sanders, Dave Liebman and Hassan Hakmoun as well as in each other’s ensembles. Both play an array of percussion instruments, allowing for a multitude of sounds each more surprising than the last. Together they share a remarkable chemistry. “Hamid and I think like one,” Rudolph says. “It’s almost uncanny at times. We’re always listening and orchestrating with each other in a way that’s incredibly free.”

Rudolph met Jones in 1974 at the Ann Arbor Blues and Jazz Festival, where they performed together in groups led by Kenne Cox and Charles Moore; with Moore they went on to co-found the Eternal Wind quartet that Rudolph has called, in much the same spirit as the Karuna Trio, “an ongoing research and development music laboratory.” Rudolph compares Jones to classic melodicists like Lester Young and Ben Webster: brilliant and bold improvisers who achieved stunning ends through elegant, understated means. “Ralph is a master orchestrator, harkening back to the tradition of soloing by generating gorgeous melodies. Ralph is always thinking about singing when he plays.”

In its compellingly original sound, Karuna blurs countless boundaries: between ancient and modern, organic and electronic, live improvisation and post-production. In his role as producer, Rudolph follows in the tradition of such formative influences as Miles Davis’ Bitches Brew, Jimi Hendrix’s Electric Ladyland and The Beatles’ Sgt. Pepper’s Lonely Hearts Club Band – artists and albums that used the studio as an instrument. In his role as conductor of the Go: Organic Orchestra, Rudolph utilizes the ensemble much in the same way that he plays his battery of hand drums; on Imaginary Archipelago he expands that concept to his processing and editing of the raw materials of the initial performance.

The use of electronics is nothing new to Rudolph, who began experimenting with early Moog and Buchla synthesizers during his days as a student in the groundbreaking electronic music program at Oberlin College. He delved deeper in the late 1980s through his partnership with trumpeter Jon Hassell, which found them working with legendary producer Brian Eno. More recently he has incorporated live electronic processing into his performances.

“To me, the most avant-garde music is the music of the Ba-Benzélé people of the Ituri forest,” he says, “because their music is so far from the materialism of music and so close to nature. A Ba-Benzélé can pick up a bamboo piece, saw it off, blow over its top and make music. I approach electronics and post-production in that same spirit of organic exploration.” 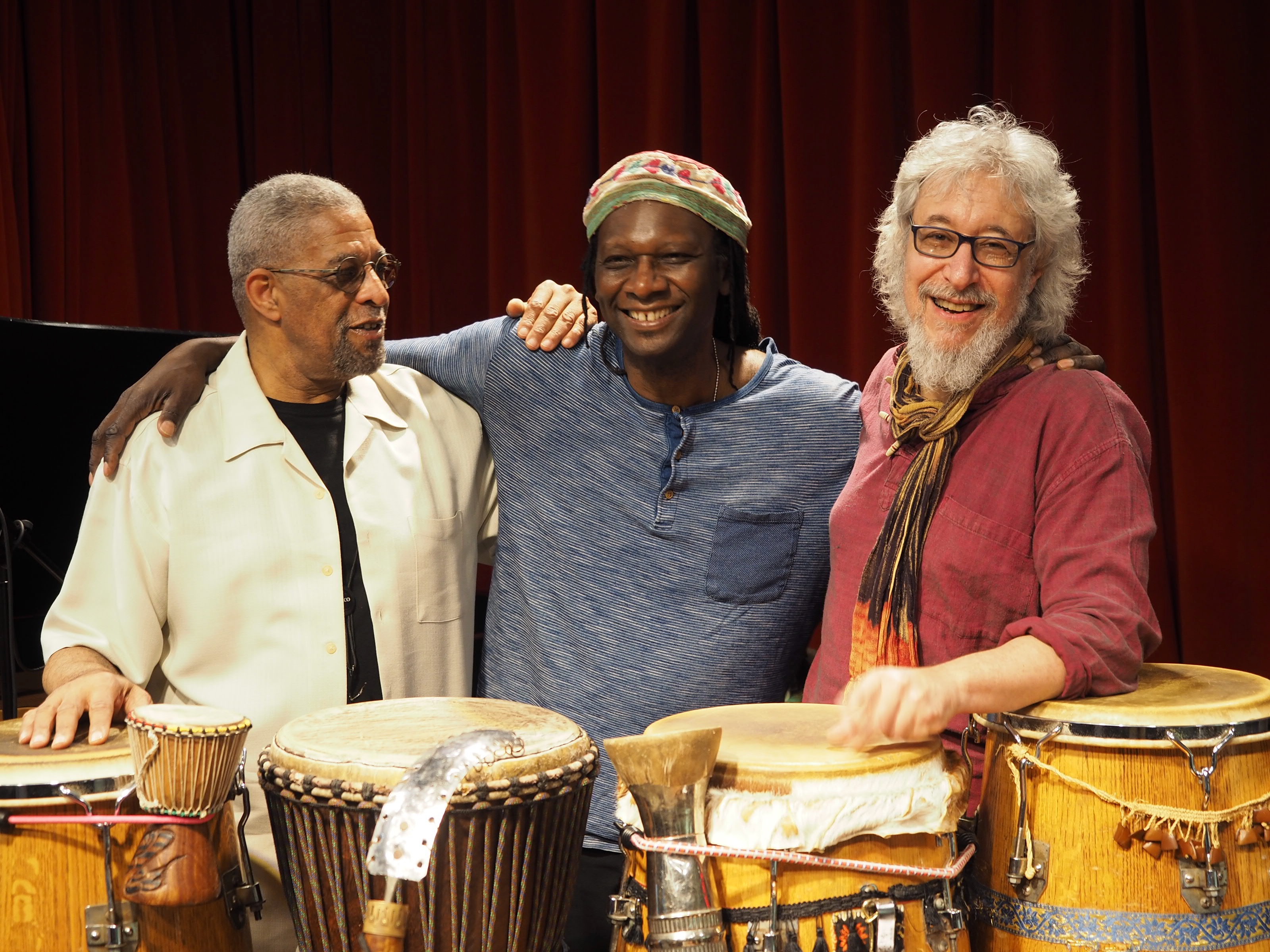 With the Karuna Trio, Adam Rudolph, Hamid Drake and Ralph M. Jones bring their unique and evolved rhythmic and sonic languages to the fore, reaching to inspire audiences through spirited dialogue. Called “a pioneer in world music” by the New York Times, Rudolph leads a number of innovative ensembles including the Go: Organic Orchestra, Moving Pictures, and Hu Vibrational and has worked with such masters as Yusef Lateef, Don Cherry, Sam Rivers, Pharoah Sanders, Jon Hassell and Wadada Leo Smith. Incorporating Afro-Cuban, Indian and African percussion into his expansive jazz language, Drake has collaborated with a wide variety of legendary artists including Herbie Hancock, Don Cherry, Archie Shepp, Fred Anderson and David Murray. Jones’ career has seen him sharing the stage and the studio with such greats as Ella Fitzgerald, Wadada Leo Smith, Yusef Lateef and the MC5. The three have shared histories that stretch back five decades, including collaborations in Moving Pictures and the Eternal Wind quartet.