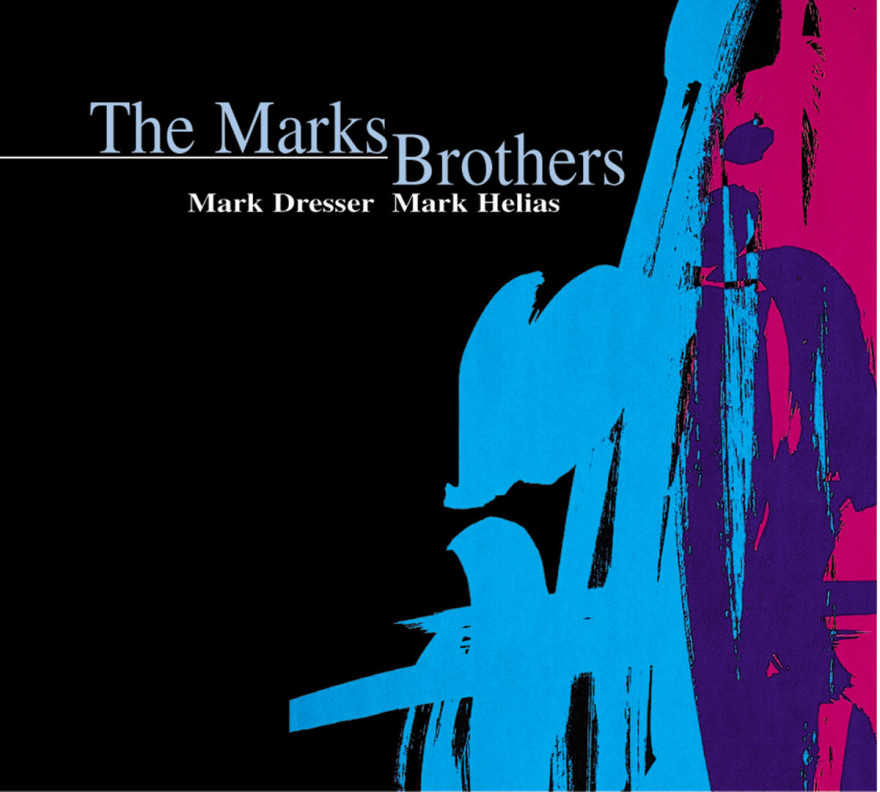 This is not a secret here for those who are reading my reviews and articles for a while, or know my taste for the doble bass music, that if there is anything new about that subject I gotta know it sooner rather than later. In that case it is definitely later , I would say that it is even pretty damn late, as this material had been recorded in 2000 and this news via bandcamp subscription came to me daily like to all of you and to say it at least: Took Me by Surprise, but what a wonderful surprise is that: Mark Dresser & Mark Helias, two of the bassists I simply admire, together making sweet and gob-smacking recording under funky cinematic joke a like title: The Marks Brothers. Please follow an excellent Bill Showmaker essay on that session written at the date but freshly discovered by myself today. What a Real blast from the Past it is!

One of the raps that stick against post-modern music is that it is often little more than a clever conceit. There are a lot of compositions that literally look good on paper, with staves of carefully drafted notation spiraling to a pinpoint, or being stratified by an expertly drawn prism. Then there are the process and game compositions, pieces activated by cue cards, musicians playing tag, and ‘viruses’ unleashed into the ensemble. And, last but not least, there are the works written for such unusually configured ensembles as Alp horn quartets. Unfortunately, many such works fail the litmus test of being as rewarding as music as they are intriguing as ideas.

All such work is legitimate experimental music; however, that legitimacy, in and of itself, does not guarantee that the work will move an audience beyond a glancing encounter with the work’s conceptual framework and into a larger consideration of musical values, let alone trigger a deeper listening experience. This is the intrinsic shortcoming of post-modern Western art music, as it generally lacks the pragmatic agenda of indigenous music. After all, North Indian ragas don’t last an hour or more simply to execute a design derived by an arcane procedure, but to induce a meditative state. New Guinean flutes are designed to produce only one tone to access the spirit world, not to rebuff Eurocentricism.

Composer-instrumentalists steeped both in the jazz tradition and what the British call contemporary music are perhaps the best positioned to connect unorthodox concepts to a larger, vital cultural context. Jazz is still not that far removed from its folk music and popular dance music roots, even after decades of being touted as art music. Jazz still has something of the pragmatism of indigenous music. Its swing, cadences, and blue note-speckled melodies operate in consort to move the listener to exhilaration or depth-plumbing introspection. Most importantly, jazz still has the power to give a roomful of strangers a sense of community and shared history. The composer-instrumentalist who can tap this power can give idiosyncratic structures and methods an immediate appeal. 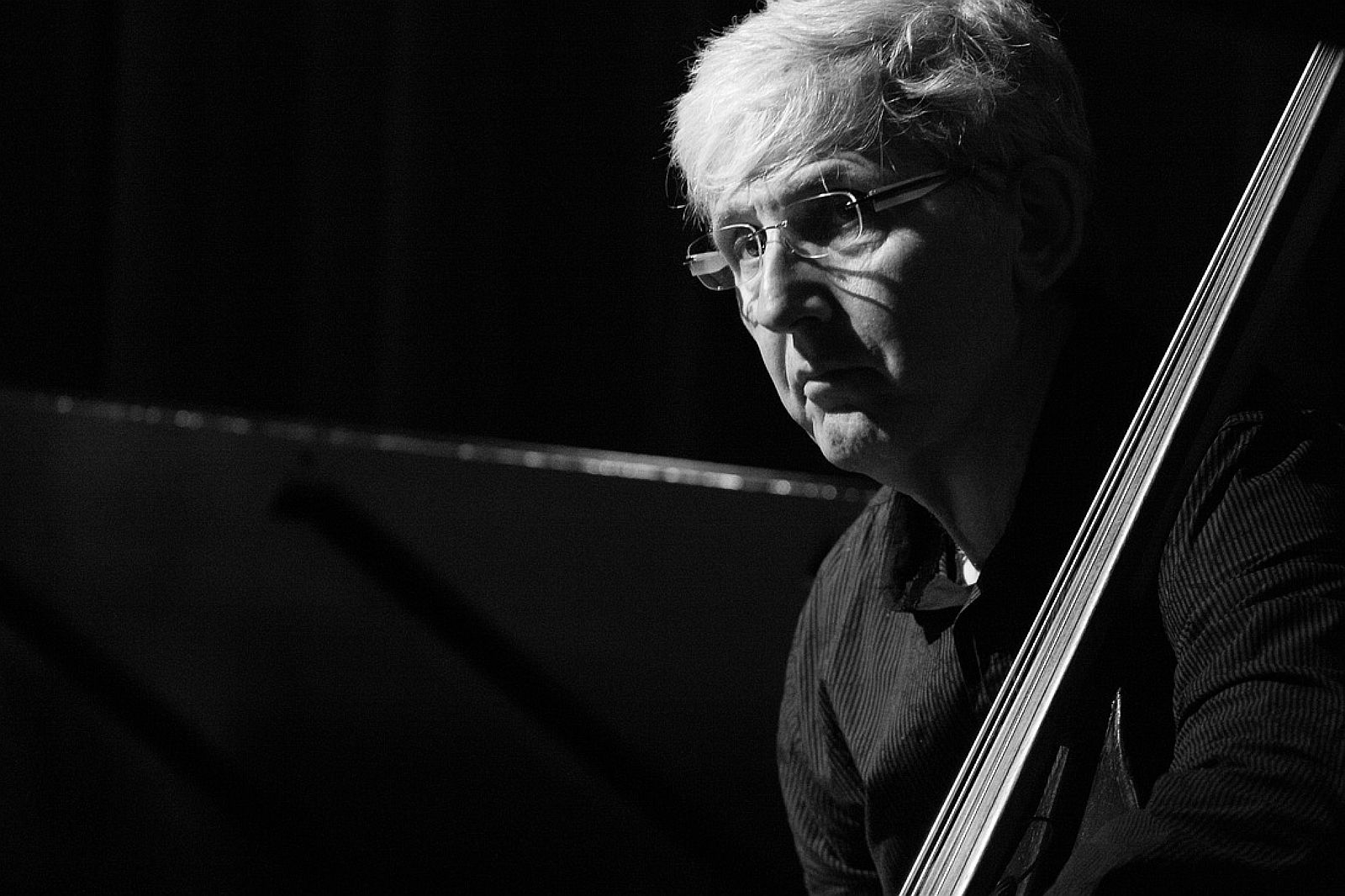 This is exactly what Mark Dresser and Mark Helias do on their first recording as The Marks Brothers. The compelling, front-and-center musicality of these performances often requires two or three listenings to discern how devices like metric modulation and the counterpoint technique of inversion propel the compositions. It’s one thing to make a sly, spring-loaded line like Helias’ ‘The Comb Over’ sing, but quite another to give a richly resonant voice to rigorously structured pieces like Dresser’s ‘Transwarmo’, which is built upon what are commonly called extended techniques, and Helias’ ‘Short’, which veers through several moods and modalities. Dresser and Helias’ performances are powerful reminders that an instrument still too often thought of as merely an ensemble workhorse can sing with the same illuminating purity as the most coveted Italian violin.

It is particularly impressive that Dresser and Helias have placed such a premium on this singing quality in a program that so deftly melds aspects of the two main trajectories bassists working in tandem have explored over the past thirty years. Working as a duo or fronting a small group have been surprisingly frequent pursuits among jazz’s most revered mainstream players. Since the ‘70s, the teams of Slam Stewart and Major Holley, Milt Hinton and Richard Davis, and others, have reinforced the traditional values of forward rhythmic movement and harmonic tension and release, while placing the great expressive capacity of the instrument in the foreground. Employing the extended techniques pioneered by the likes of Charles Mingus and Bertram Turetzky, maverick contemporary music players like Barry Guy and jazz refugees like Peter Kowald and Barre Phillips concurrently developed a contrasting approach to bass duets, often using only timbre and attack as the building blocks for their improvisations.

It is important to stress that Dresser and Helias have not simply split the difference between the two. That would be too clever by half. Instead, they have approached the concept of a bass duo largely from a compositional perspective. While the program is liberally peppered with the type of monster chops-laden improvisations that send many bass players back to the woodshed, the improvisations are natural outgrowths of the notated materials. It is a chicken and egg proposition whether it is Dresser and Helias’ command of the instrument that gives odd meters a bounce, or their compositional acuity that hears the swing in an odd meter. Regardless, there is an organic feel to the music that not only reflects the close rapport Dresser and Helias have developed over many years, but an articulation of a third way for a bass duo. 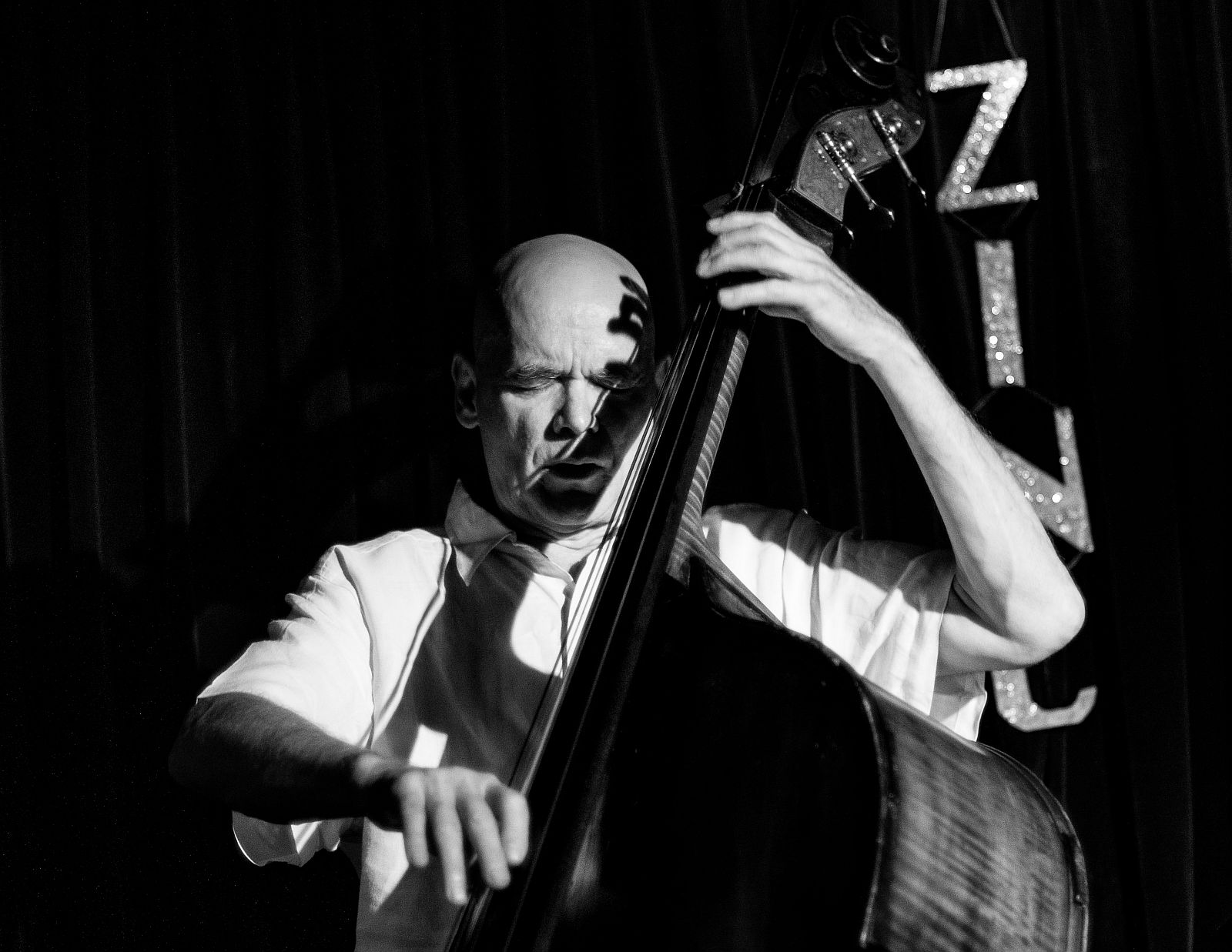 This third way can be discussed by first considering an almost impenetrable thicket of trend lines, criss-crossing over each other as they zigzag across a chart. Each of the trend lines represents a technique, a genre, or a historical figure contributing to a composite picture of present day basscentric creativity. Working as composers, ensemble players, and improvisers in a variety of genres and sub-genres, Dresser and Helias have accumulated a vast inventory of nodal points through which this multitude of seemingly unconnected threads can be networked to support an inclusive sensibility. Yet, both Dresser and Helias are realists: It’s all there to be used; and, it’s all there to be thrown back in your face if the concept doesn’t cut it as music.

This is at the root of the pragmatic standard Dresser and Helias uphold throughout the program, both as composers and improvisers. Provocative compositional features such as the odd-metered motives of Dresser’s ‘Zeppo’ (which, along with Helias’ ‘Chico’ is part of the in-progress ‘Marx Brothers Suite’), the pentatonics of Helias’ ‘Pentahouve’, and the convoluted blues form of Dresser’s ‘Digestivo’, function primarily as hooks, drawing the listener in, and creating a sense of anticipation about how these kernels will unfold in the course of the performance.

The Marks Brothers’ other revealing trait is their penchant for homage. The act of paying homage is central to indigenous music around the world; it’s right up there with beseeching the supernatural and beckoning a mate, and it’s just as pragmatic. Within the context of contemporary art music, paying homage can be a solemn matter, or it can be as light as tossing off a bon mot. Dresser and Helias do both. In dubbing themselves The Marks Brothers after the famed comedy troupe, they reveal a refreshing, self-effacing wit, which is reflected in the zany scurry of Dresser’s ‘Zeppo’. Yet, the poignant arco section Helias slips into ‘Chico’ suggest they are as equally attuned to the pathos that underlies the pranks. This is also the case with Dresser’s tribute to the most notorious of Surrealist films, ‘Un Chien Andalou’, which taps an intense Iberian lyricism. But, the most deeply affecting homage of the program is Dresser’s ‘Modern Pine’, a tribute to an elder and a fallen hero – Ed Thigpen, whose nickname is ‘Pine’, and Lester Bowie. The homage is as heartfelt as it is discreet and multi-layered, as Dresser subconsciously reshapes the Art Ensemble of Chicago’s theme song, ‘Odwalla’, using an emotional palette that spans the elegiac to the jaunty.

In the end, after all the connections have been made, and all the contextual underpinnings have been secured, the bottom line question is :
Does it work? In the case of The Marks Brothers, the answer is a matter of fact yes.

Recorded at Acoustic Recording by Michael Brorby on 24 April, 10 May and 2 August 2000.
Mastered by Jim Hemingway at JCS Audio.