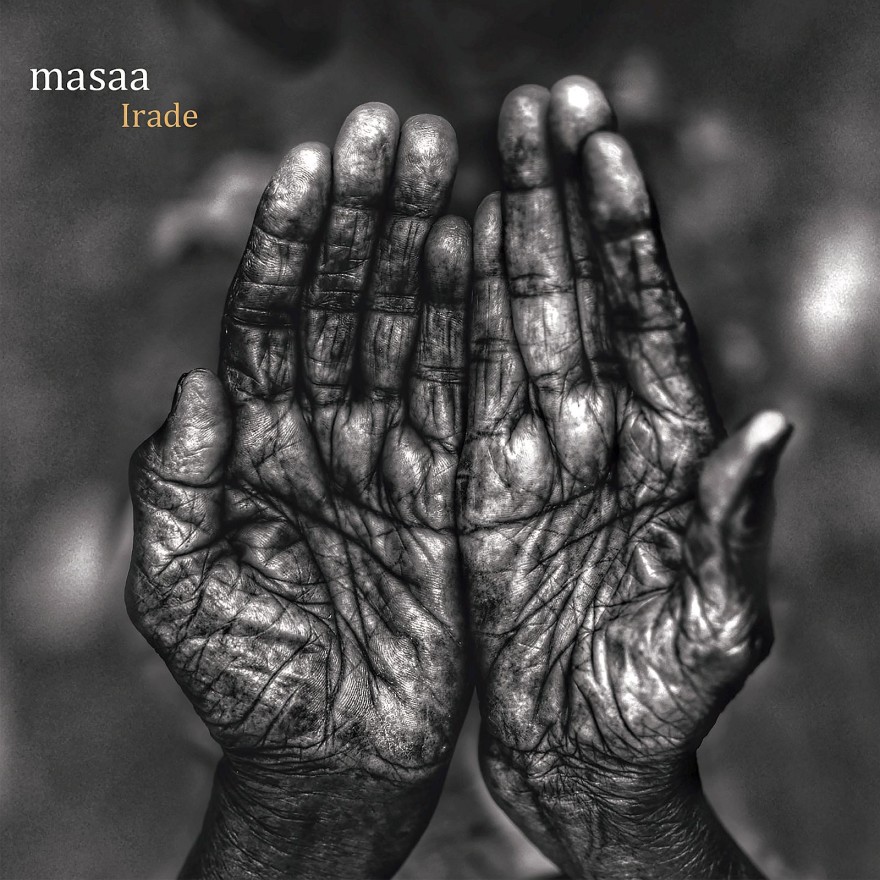 “The music has an incredible flow, a sophisticated dramaturgy, is emotionally very intense and always impresses with a trumpet and flugelhorn sound that is hard to beat in terms of proximity and warmth,” stated NDR Info

“[…] each individual shows their personal touch, together they become music that unites loud and quiet, thoughtful and intense tones, Orient and Occident in an extraordinary way.” – Süddeutsche.de

Almost three years have passed since the release of the CD Outspoken and a lot has happened since then. The quartet’s tour of their release took them to Tunisia, Azerbaijan and Izmir, and from Spain to England all across Western Europe. Enthusiastic reactions from audience and media indicated that Masaa would successfully continue on their path. Here the Irade is coming then.

Irade is a presage of something new happening on Masaa’s musical path, after an unexpected break, when the pianist Clemens Pötzsch left the perfectly recorded band. The change naturally also brings about changes in sound and aesthetics, which Masaa know how to use to their advantage. Still the striking vocals of Rabih Lahoud, tastefully embellished with arabesques, are at the centre; his warm timbre over several octaves and his expressiveness up into high registers characterise all songs on Irade. What has also remained are the intricate arrangements, whose powerful dynamics occasionally go beyond the common chamber musical scope. This is not only the result of the enormous range of Lahoud’s gravitational voice, but also of the extremely variable playing of the trumpeter Marcus Rust and drummer Demian Kappenstein, unmistakably rooted in contemporary jazz. At their side Reentko Dirks now creates nuanced sounds thus far unheard in Masaa, thanks to his special acoustic guitar, from whose body two necks grow.

One of them is the usual classical model, on which Dirk plays graceful pickings and powerful or relatively hard chords. At times they evoke memories of Arabo-Andalusian stylistics and even reach Flamenco vehemence, for example in the first quiet, later fast-paced “Averoes“. The second neck is stringed partly with bass strings and partly with double strings, and there are no frets on the upper half of the fingerboard, which facilitates the playing of glissandi and quarter tones. In this way Dirks can recreate the sound of a double bass and an Arabian lute. “Reentko has made the oud sound like his own and masterfully interweaves it with other timbres,” Rabih Lahoud praises, “I haven’t heard such diversity with this intensity from any other musician. He creates new themes for our musical dialogues.”

“We have included many of Reentko’s compositions in our repertoire,” Marcus Rust adds, “in order to open a new chapter of the band, in which he will play a decisive role.” Undoubtedly this has moved the music more towards the Orient. The string leaping of the award-winning musician, his counterpoints and the unisons with Lahoud’s singing leave no doubt that the 40-year-old from Lower Saxony has intensively studied traditions of the Eastern Mediterranean. In addition, he has a profound knowledge of European classical music and knows how to purposefully abstract his already broad sound spectrum with extreme tuning or mechanical preparations, as can be heard in “Sara” for example. Only very rarely and very discreetly, like in “Farascha” for example, Dirks uses an e-bow for long lasting notes.

Marcus Rust’s pieces are inspired by well-known crossover artists with Arab roots, namely Dhafer Youssef, Anouar Brahem and Rabih Abou-Khalil. “I had to rethink my composing. Composing for piano was familiar to me because I play it myself. Writing for guitar, on the other hand, required a more conscious approach. On his main instruments trumpet and flugelhorn, Rust creates diverse, often atmospheric timbres, changing from dark to shimmering to vibrant colours, from lyrical passages to rhythmic phrasing or to unisons or dialogues with Lahoud’s lively melismas” – says he.

Irade means willpower and was determined to be the title of the album early on. “The willpower of my heart sleeps when I don’t believe in it – for example when someone told me I had no will, I had no power, I couldn’t change anything,” Rabih Lahoud explains. “But as soon as I know that I have all this in my heart, my willpower awakens and I experience myself and my life in a new way. I can change things.” Born and raised as a child of Catholic Maronites in Lebanon in 1982, Lahoud already questioned early on the omnipresent demand there to have to choose a side. Until today he rebels against black and white rules, with which he was confronted not only in the Middle East, but also during his studies in Düsseldorf. Fortunately, he met the trumpeter Markus Stockhausen in mid-2008, who encouraged him to explore the musical traditions of his original homeland. From Germany Lahoud developed a new perspective of the rich Arab culture, and at the same time the idea for Masaa emerged in 2011. Trumpeter Marcus Rust already had a band with his fellow students in Dresden, Clemens Pötzsch and Demian Kappenstein; the fact that the trio and Lahoud crossed paths was again thanks to Stockhausen.

Since Outspoken, Lahoud says he has “become more independent of my past, to which the work with this band has contributed a lot. I totally engage with my fellow musicians and experience the flow of music more and more strongly.” … “The nature of Masaa’s music lives from the moment” – Lahoud explains.

Thoughts about past and tradition, future and innovation are increasingly fading into the background. In his emotional and poetic lyrics, which are like always printed in four languages in the booklet, he doesn’t leave out bad things from the present. He sometimes concretely addresses fences, war and destruction, but still always keeps an eye on the beautiful and gives hope instead of lamenting. “To see reality as it is, is an important quality for me. To allow the momentary feeling, so also melancholy, is important to gain courage. For me that is the underlying mood and attitude of the songs.” 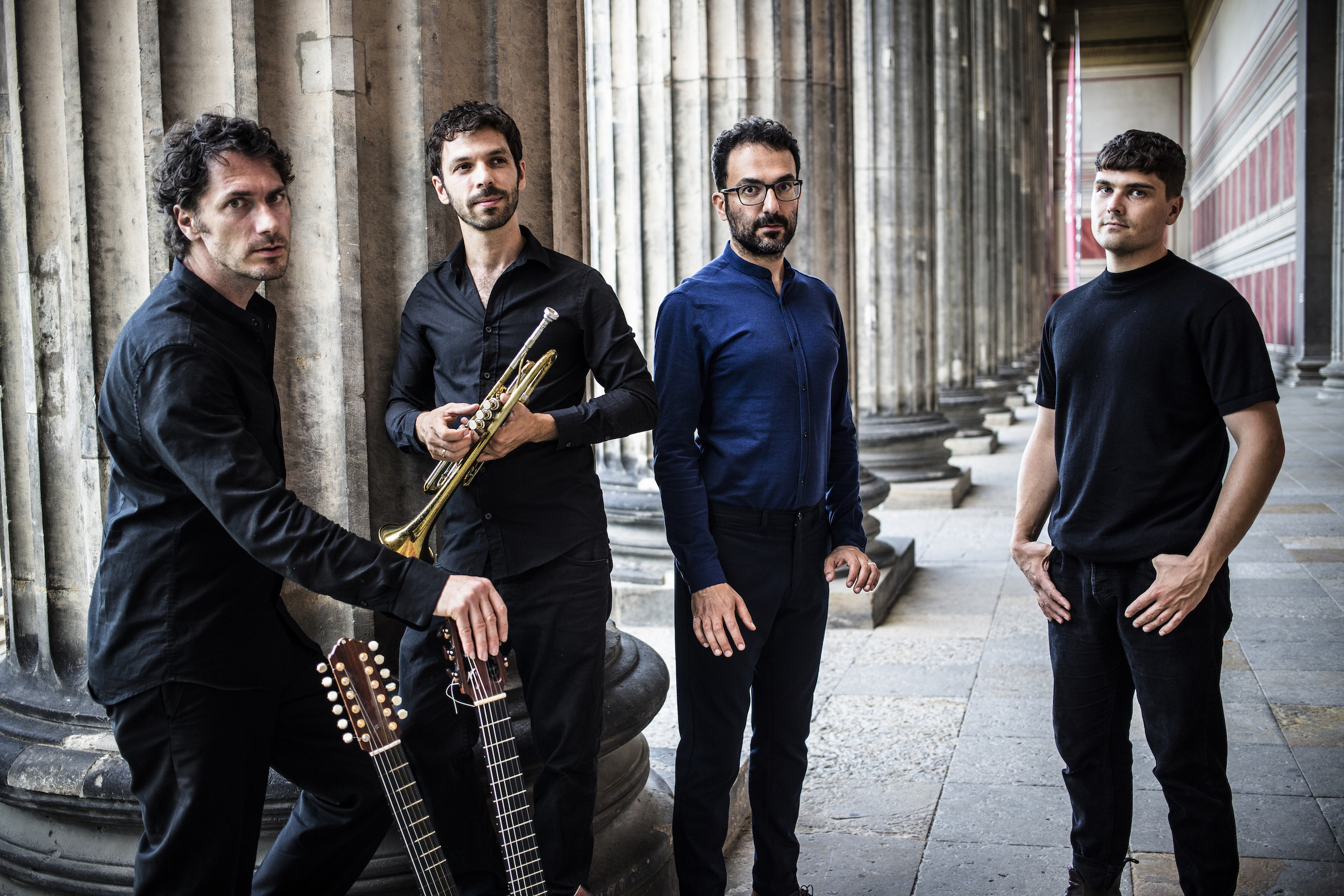 All tracks on Irade were written specifically for the current constellation, and as before, the band created the arrangements together. The new, intricately woven Masaa sound is even more lively and dynamic. It shifts between intimacy and unique melodies, dazzling twists and surprising contrasts, changing tempos and grooves. More than ever the quartet creates a consistently independent, incomparable language of sound, which in many respects artistically unites what others often separate with imaginary barriers or real borders.