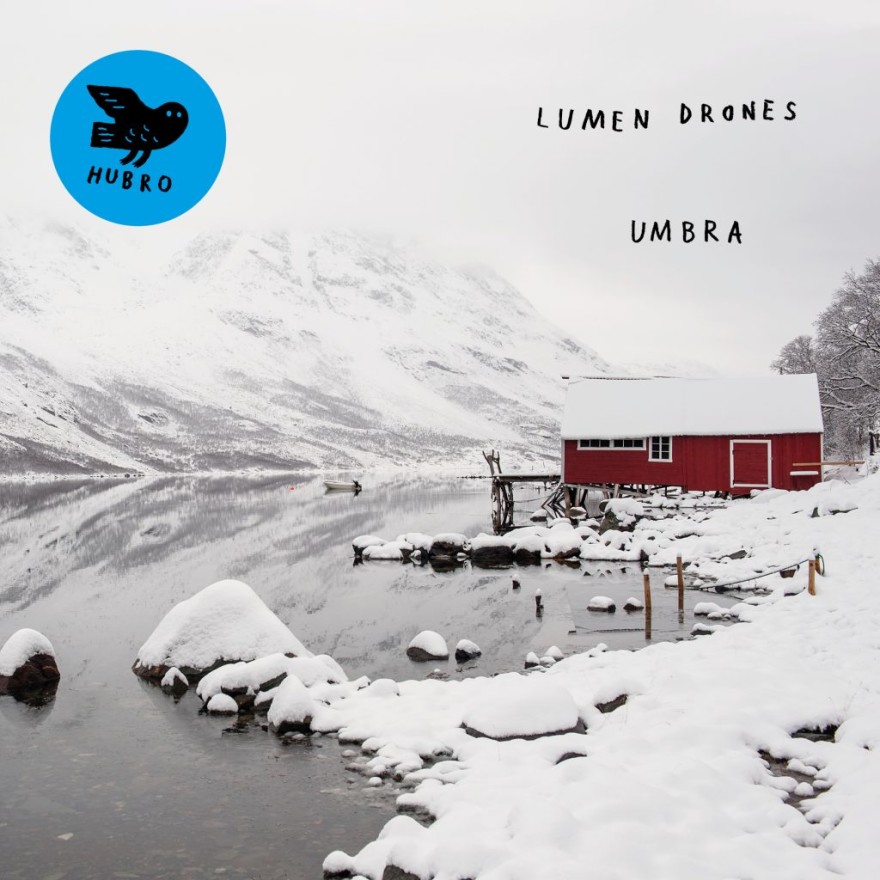 Over nine tracks varying from two to six minutes in length, Nils Økland (fiddles), Per Steinar Lie (guitars) and Ørjan Haaland (drums) create a completely convincing musical world where the conventional boundaries separating different styles seem to disappear. Exactly what type of music this might be, and where it might come from, ceases to matter once one is engaged in the act of listening. Each tune has a distinct identity of its own, and imprints itself on the mind very easily, as does the aesthetic unity of the album as a whole. Indeed, ‘Umbra’ proves compulsively listenable at whatever level you choose, and repays close attention and repeated exposure.

It also takes us far beyond the initial, shock-effect response to the first album, and the perceived incongruity of a musician schooled in folk and classical music collaborating with members of an experimental rock band, the guitarist and drummer from the influential post-rock band The Low Frequency in Stereo. On ‘Umbra’, everything fits perfectly. While a convenient image for Lumen Drones could be that of a lone voice (Økland’s Hardanger fiddle) crying out in the forest, where it’s menaced by the jagged shapes of malevolent trees (Per Steinar Lie’s buzzsaw guitar and Ørjan Haaland’s rumbling drums), the truth is much less clear-cut. Økland’s ‘voice’ can be as wild and as frenzied as either of his band-mates’, while they are as capable as Økland of great delicacy and restraint.

Rather, the strength of Lumen Drones seems to lie in the way the roles of the individuals are made to work within the demands of the ensemble, and in cooperation with each other. What is often most notable about ‘Umbra’ is the very openness of each piece, and the lack of any set pattern as to how it wiill be approached. The reductive stereotype that could be applied to the band – a sort of beauty and the beast myth of rustic folk musician meets hard-core post-rockers – is hardly borne out by the reality, either. Like Nils Økland (who once performed in a new wave rock band, Lover & Tigre), Per Steinar Lie and and Ørjan Haaland are experienced improvising musicians who are used to playing in a variety of contexts within the intensely varied Norwegian experimental scene. Again like Økland, who spends as much time in the avant-garde as he does in whatever ‘folk’ might mean these days, they have deep hinterland: The Low Frequency in Stereo has been together for twenty years, and were nominated for a Spellemansprisen (the Norwegian ‘Grammy’) in 2012, in the ‘pop’ category. The Nils Økland Band’s ‘Lysning’ (also on Hubro) was nominated in the ‘open’ category in 2018, and won. Both sets of artists are acclaimed internationally as well as within Norway,

The musical material and influences that the three principals bring to the table are also very compatible, just as the pentatonic scales and drone-like sympathetic strings of the Hardanger fiddle sound entirely at home with much contemporary instrumental music, whether jazz, experimental rock or classical composition. But if you listen to it carefully, ‘Umbra’ doesn’t really sound like anyone else. We can move from a solo fiddle prelude played as delicately as a baroque chaconne, to a stomping, motorik-beat rocker and then to a keening, wailing, feedback-heavy dirge, and everything seems all of a piece. There might be a bit of Sonic Youth in there, along with Joy Division, John Cale, Arvo Pärt, Dick Dale, Lamonte Young, Paganini, and, well, everyone they have ever listened to, but it doesn’t really intrude: Lumen Drones play Lumen Drones music.

There’s also a very satisfying sense of design to ‘Umbra’, both on the micro level represented by the span of each separate track, and the macro level of the album as a whole. From the hypnotic opening prelude of ‘Inngang’, with Økland’s fiddle heard at first indistinctly against what turns out to be the burbling atmospherics provided by burring guitar strings, to the absolutely epic final two pieces, ‘Etnir’ and ‘Under djupet’, where the music seems poised in a perfect form of ecstatic stasis, as if could continue forever, ‘Umbra’ casts a truly powerful spell. By the end, one is conscious not of three separate voices, or an opposition between the acoustic and the electric, but rather of one, powerful aesthetic unity. Then you start the album all over again.

All music by Lumen Drones