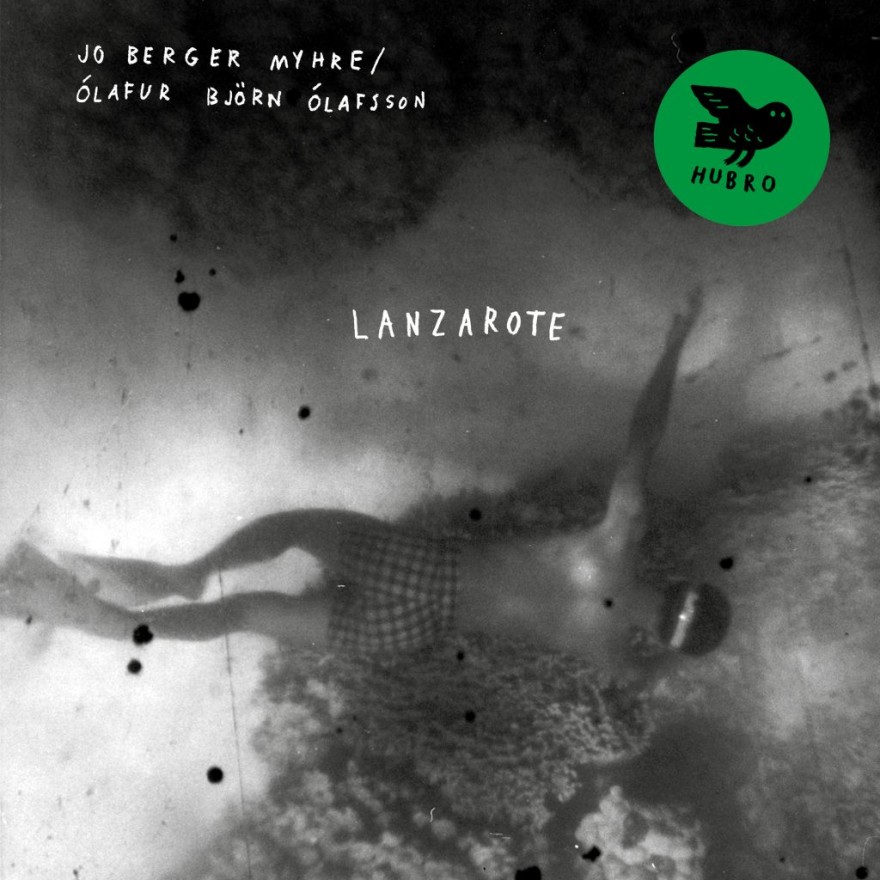 Following on from the Norway/Iceland duo’s startlingly assured debut, ‘The Third Script’ (Hubro, 2017), Jo Berger Myhre and Ólafur Björn Ólafsson’s new album, ‘Lanzarote’, represents a quantum leap forward. By the end of the relatively modest but incident-packed 32-minute duration, the listener may require substantial time for reflection. As good as the debut recording is, ‘Lanzarote’ goes much, much deeper, with an emotional reach to the music that is immensely affecting.

Recorded once again between Reykjavik and Oslo, and mastered, like ’The Third Script’, by Helge Sten at Audio Virus, ‘Lanzarote’ builds upon the experimental, super-saturated sound and grainy resolution of the ambiently-inclined debut with fully-formed yet fragile ear-worm melodies played on piano and double bass, augmented on three tracks by melancholy brass fanfares from trumpeter Eiríkur Orri Ólafsson
with Ingi Garðar Erlendsson on trombone and tuba. Otherwise, the two principals do everything themselves, with all seven tracks credited as ”written, performed and produced by Jo Berger Myhre and Ólafur Björn Ólafsson.” Myhre covers double bass and electronics/keyboards; Ólafsson, piano/organ/Moog and drums/percussion. “The album was recorded over a longer period than our first one, a year or so, with recordings made both in Oslo and Reykjavik throughout several sessions”, says Ólafsson. “As before, our songs are improvised and then sonically nurtured throughout the editing process, often with overdubs.”

The key to what might be called the emotional address of the new album as compared to its predecessor can be partially found in the story behind its composition, for ‘Lanzarote’ is a project freighted with meaning whose references extend far beyond the formal properties of the music itself. Perhaps the most significant element is the shock reaction to the unexpected death of the Icelandic composer Jóhann Jóhannsson, with whom Ólafsson had frequently worked, and to whom the opening piece, ‘Grain of Sand’, is posthumously dedicated. An unapologetically beautiful, heart-tugging theme which acts as a kind of requiem or threnody for the late composer, it sets the album’s governing mood of reflective melancholy. “’Grain of Sand’ is a song full of sorrow”, Ólafsson says. “We wrote it only days after the passing of Jóhann Jóhannsson and thought it only appropriate to dedicate it to the memory of him and the impact his music had on us. We were still haunted by his death. He was a friend and mentor. We played together in a band in the 90s and I would work with him on and off since then, often very intensely since his career as a film composer took off. Lanzarote is also the last place me and Jóhann met. I played a show there with him in a cave, a few months before his passing. Our last meeting was at the airport. He went to Costa as I went to board my plane. We joked about spending some time on the beach next time.”

‘Lanzarote’ is also a reflection on place – the Canary island Lanzarote, with its strange desert landscape and black volcanic ash beaches and mountains – and the further, literary reflections contained in the short prose work of that name written by the French novelist and poet Michel Houellebecq (another of whose works, the novel ‘Atomised’, is referenced in the track ‘Atomised – All We’ve Got’). “Both Oli and myself have been reading several of Houllebecq’s novels and discussing them”, says Jo Berger Myhre. “For me, what strikes me the most about his writings is how he moves from profound emotional descriptions of human relations – or the longing for them – to his typical misanthropic and grotesque view of humankind. Our new album is not meant as program music to this dialectic, or to Houllebecq’s books (and we mostly made the music before we started discussing him), but the music does contain a similar contrast between intimate and harsh, which was something I wanted to achieve.”

The location of Lanzarote as the setting for a cult dedicated to the pursuit of eternal life recurs in Houllebecq’s apocalyptic novel of 2005, ‘The Possibility of an Island’. “Lanzarote is a utopian place”, continues Ólafur Björn Ólafsson. “It breathes familiarity and at first seems to demand nothing, but as you go deeper into the island, you encounter the volcanoes and the black mountains…Jo and I had both been to Lanzarote to play shows there on different occasions and we found the place more and more interesting as we discussed it further.”

You don’t have to try very hard to hear imagined echoes of Lanzarote in ‘Lanzarote’. It’s easy to detect extreme contrasts and a dialectic between sound and silence, place and non-place, figure and ground, in the simultaneously sparse yet monumental music. Each piece also seems to draw the listener in very gradually, exerting a slight but irresistible gravitational pull. Suddenly, one finds oneself deep within an interior landscape, as if listening to a soundtrack for a film that’s as yet unmade. It’s powerful stuff, confirming Jo Berger Myhre and Ólafur Bjorn Ólafsson as among the most outstanding sound-producers at work today.

“Grain of Sand” is dedicated to the memory of Jóhann Jóhannsson