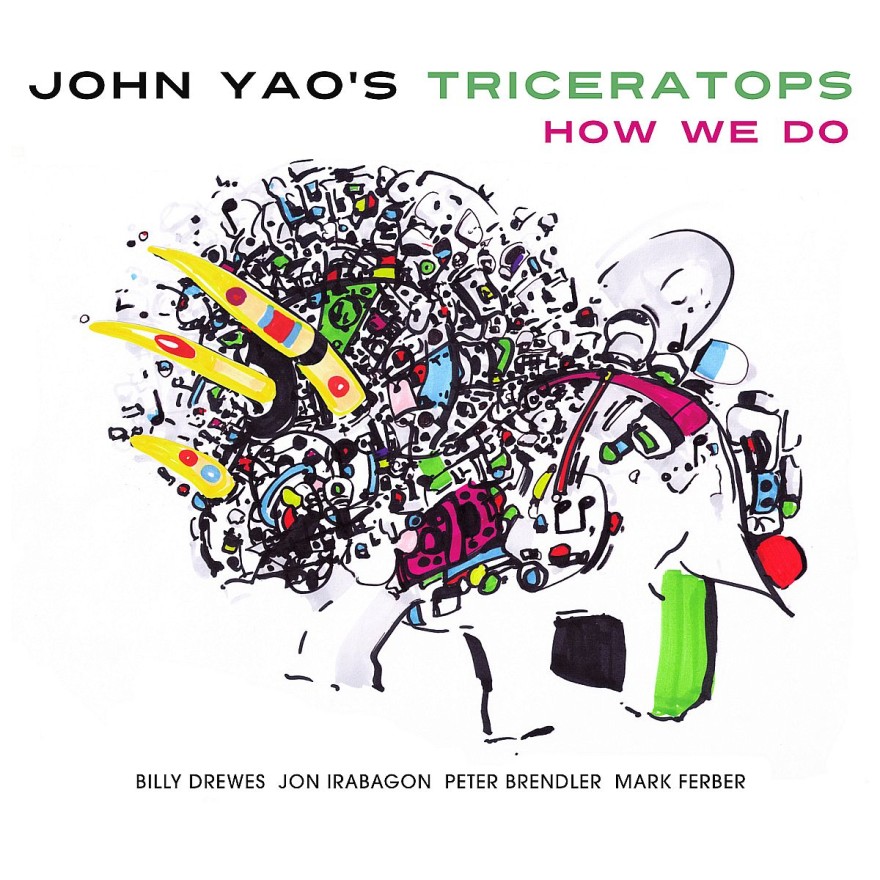 “Boldly diverse, Yao’s compositions cut across the swath of contemporary jazz’s field, [amalgamating] a surprising range of styles and periods—sometimes within a single composition.” – Franz Matzner, All About Jazz

With its dual saxophone and trombone frontline, John Yao‘s Triceratops is a force as formidable as the majestic three-horned dinosaur it’s named after – especially with the thundering voices of Yao’s trombone and saxophonists Billy Drewes and Jon Irabagon front and centre.

Triceratops’ debut album, How We Do is the latest showcase for Yao’s composing and arranging gifts, previously evidenced in his work with his own quintet and his adventurous big band, the 17-Piece Instrument. Yao’s writing for Triceratops corrals the audacious virtuosity of the three horn masters, propelled by the vigorous rhythm tandem of bassist Peter Brendler and drummer Mark Ferber.

Like the 17-Piece Instrument before it, Triceratops’ name suggests multifarious parts coalescing into a harmonious, organic whole. In his orchestral thinking Yao echoes Duke Ellington, who famously thought of his renowned band as his instrument. “The idea is to have different parts coming together into one,” Yao says. “That was the concept that was in play as I was thinking about these amazing players and how to bring them together into an organic combination.”

That task is easier described than accomplished, as Yao discovered as he set out to craft new music for the ensemble. The Wilmette, Illinois native had previously led a three-horn band during his five-year stint as a freelancer in Chicago. But that group included a guitarist, providing the chordal element that Yao intentionally omitted this time around. That decision provided unique challenges that the composer embraced, leading to inventive music that walks a daunting tightrope between robust swing, soaring improvisational flights, and unexpected melodic twists.

“In any arranging class you’ll learn that three horns is the hardest combination to work with in achieving a full sound,” Yao explains. “If you just had one more voice you can fill out the harmony more clearly, but with three you’re constantly boxed into corners, so that was a huge challenge orchestrationally, especially with this group because there’s no piano or guitar. But I like to set up boundaries for myself to cross. Maybe I just like to make my life miserable, but the idea is to try to grow as a musician and push my limits.”

Yao had an unrivalled opportunity to workshop this tricky new music thanks to a monthly residency at Terraza 7, a club near his home in Queens. Convening the band every month to experiment with new pieces and revise the music from month to month, Yao honed the music to the keen, focused form in which it appears on How We Do.

Another benefit was his familiarity with the individual voices that he brought together in Triceratops. Irabagon has been a close collaborator throughout Yao’s career, appearing on each of the trombonist’s albums to date. Through that relationship Yao has gained an inspirational familiarity with Irabagon’s vast arsenal of extended techniques and offbeat instruments as well as his singular approach. “Jon’s like a Swiss army knife,” Yao jokes. “He can play in any situation you put him in and thrive; he’s so creative and versatile.”

Yao got to know Drewes on the bandstand through their work with the legendary Vanguard Jazz Orchestra, and originally approached the veteran saxophonist to play with the 17-Piece Instrument. The thought of pairing two such extraordinary saxophonists provided a major impetus for forming Triceratops. “Drewes plays alto with a tenor mouthpiece, which is really rare and gives him this unique fluffy, airy sound,” he says. “I wanted to contrast that with Irabagon, whose tenor sound can be edgy, crisp and fiery. My own sound, which I like to think of as warm, dark and mellow, is planted somewhere in the middle and is meant to act as a glue between these two.”

Brendler is another frequent partner, both in Yao’s bands – he’s recorded on several of the trombonist’s albums – and at Terraza 7, where the two co-host a monthly jam session. The bandleader has worked with Ferber in a variety of contexts, though always under other musicians’ leadership, so wanted to invite the stellar drummer into his own ensemble. The pair’s bracing hook-up comes to the fore on the album’s second track, “Triceratops Blues,” which moves with the implacable power of the titular beast.

The album opens with “Three Parts as One,” reinforcing the group’s central idea with its deft weave of the tripartite front-line. The title track, “How We Do,” shines the spotlight on Brendler’s agile virtuosity before the horns are set free for a triangular juggling act later in the piece. Defying the harmonic challenges of the instrumentation, “The Golden Hour” evokes the warm, rich hues of that spectacular sunset moment so ideal for photographers. The jolting stroll of “Doin’ the Thing” takes its name from a favorite jazz-cat description of a working musician’s life that, Yao says, “in a weird way means nothing but totally makes sense.”

The tender “Circular Path” is a tribute to a friend and fellow trombonist that recently returned home to his native Japan after 20 years in the States, while “Two Sides” generates thrilling friction from two contrasting time feels. The album concludes with Jon Irabagon’s composition “Tea for T,” which reveals the joy that the band finds in playing together as it ends on a tongue-in-cheek race at a blistering tempo.

On How We Do, John Yao’s Triceratops one-ups its prehistoric namesake, not only wielding its three horns with staggering power and monumental beauty, but speaking in one eloquent voice as well. 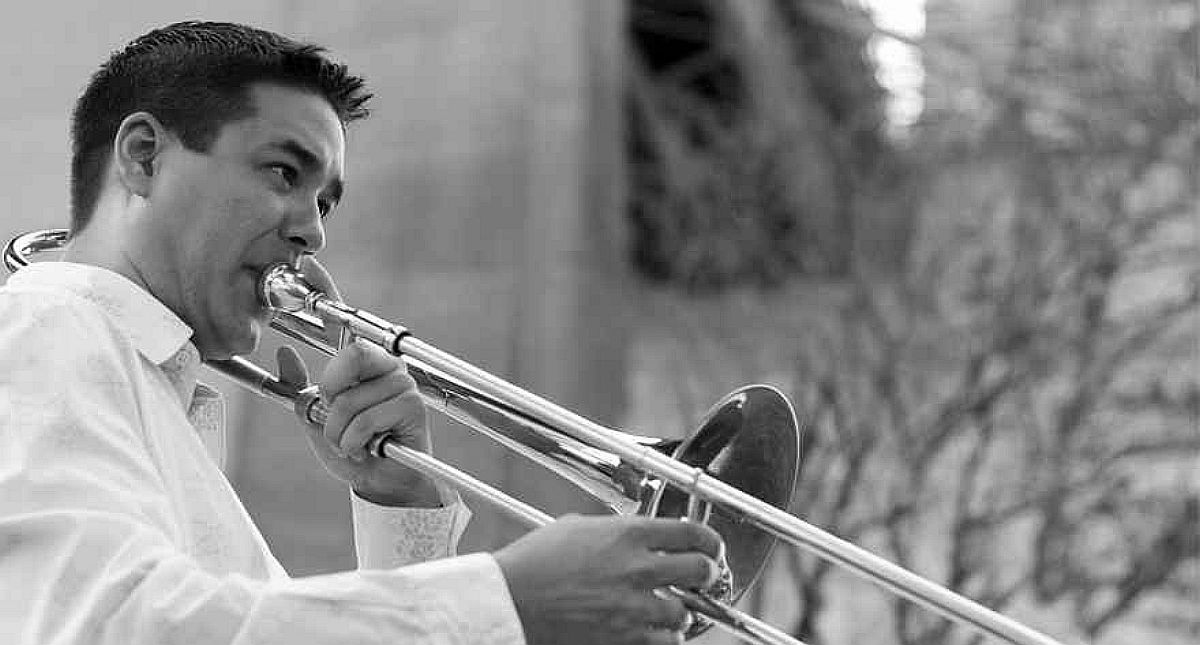 For over a decade, John Yao has been honing his talents as a trombonist, composer and arranger, and cementing his place on the New York City jazz scene. Yao’s lyrical soloing and expressive, round tone, combined with his relentless drive to push the boundaries of harmony and rhythm, have established him as a unique and forward-thinking jazz talent.  All About Jazz calls him “an evolving artist who continues to grow at a rapid pace.” Yao has released two albums with his Quintet – his 2012 debut, In the Now, and 2017’s Presence – as well as Flip-Flop, with his big band John Yao and His 17-Piece Instrument. As a trombonist, Yao has worked extensively as a sideman for Grammy-award winning New York City ensembles, such as the Vanguard Jazz Orchestra and Arturo O’Farrill and the Afro-Latin Jazz Orchestra. He has also performed with such esteemed and acclaimed musicians as Paquito D’Rivera, Eddie Palmieri, Danilo Perez, Chris Potter and Kurt Elling, among many others.  Yao is a staff arranger for the JMI Jazz World Orchestra and has been commissioned by the Afro-Latin Jazz Orchestra among many other ensembles.  He is currently an Adjunct Faculty at Molloy College and Queens College.