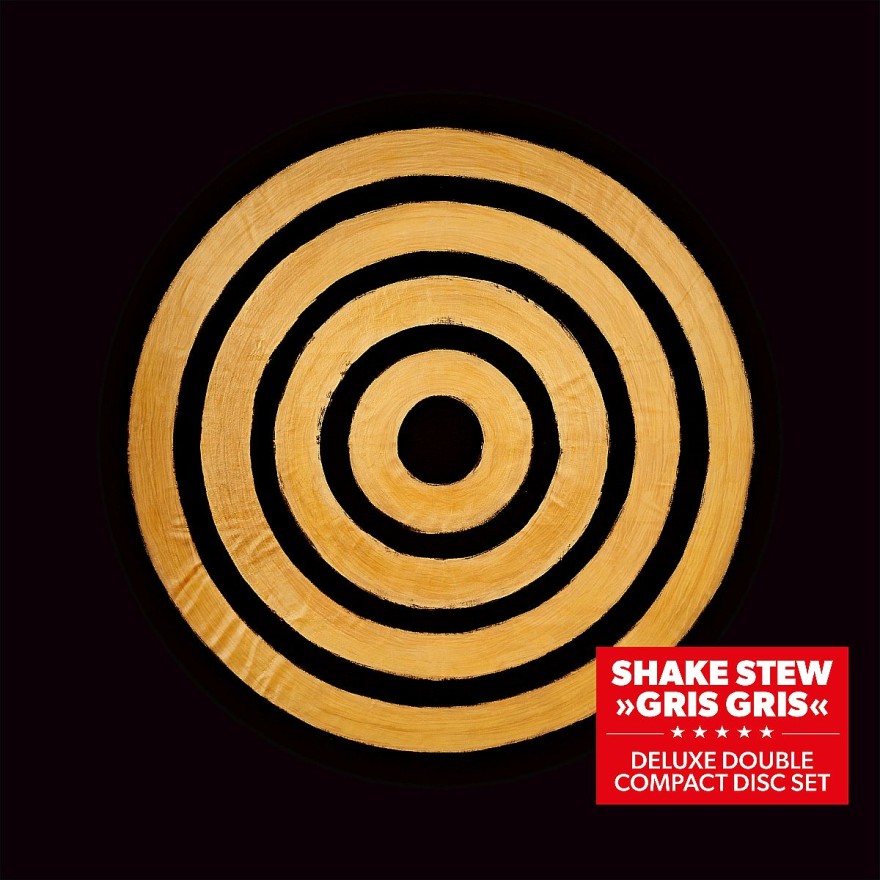 ” …. more energy field than linear narrative. One does not listen to [the music] the creative will, but can also receive the flow of ideas. ” – Ralf Dombrowski for jazzthing

The soloist septet Shake Stew, founded in 2016, has had an unusually steep career since its debut in the same year at the Jazzfestival Saalfelden and its debut album The Golden Fang (VÖ beginning of 2017). She has already led the band to North Sea Jazz in Rotterdam, to Jazz au Chellah in Morocco and to festivals in Mexico City, Montreal and Istanbul. The band does away with all generations, including the hip X-Jazz in Berlin, attended by mostly young people. At the beginning of 2019 Shake Stew delighted 900 spectators in their “home club” Porgy & Bess in Vienna as well as with an extraordinary partly theatrical choreographed performance at the Jazzfestival Münster. Along with the stormy concerts and the 2018 released second album Rise And Rise Again (including cooperation with Shabaka Hutchings) are very positive reactions in the media.

While the enthusiastic audience still has the sounds of the last album in their ear, the creative ensemble around “Bass-Leninist” (Süddeutsche Zeitung) Lukas Kranzelbinder is already providing a new musical fireworks of ideas. Even the mysterious title Gris Gris suggests a magical sound journey. Again, the unusual instrumentation interlocks seamlessly with each other, opening doors to un-imagined worlds of sound again and again. It quickly becomes clear that the band’s consensus is “not to take any musical shortcuts on this third album, but to go all the way“, says Kranzelbinder.

In spite of the enormous musical abundance, this imaginary thread never breaks loose, but rather, Gris Gris gradually condenses from piece to piece into an energetic whole, in which every sound, every solo and every rhythm corresponds with the preceding material and arouses new emotions. Diversity rightly bears the name Gris Gris, as it is an African term that is as traditional as it is ambiguous. Depending on the region and culture (up to voodoo mysticism) a Gris Gris refers to earthly and above all supernatural things, often it is used as a talisman, amulet or magical object. “In general, it can be said that it is an object that gives the owner or the owner a very special and unique energy,” explains Kranzelbinder. “This thought has always been through the music of Shake Stew. Spirit is always the highest measure of things, all other factors follow that energy. “ 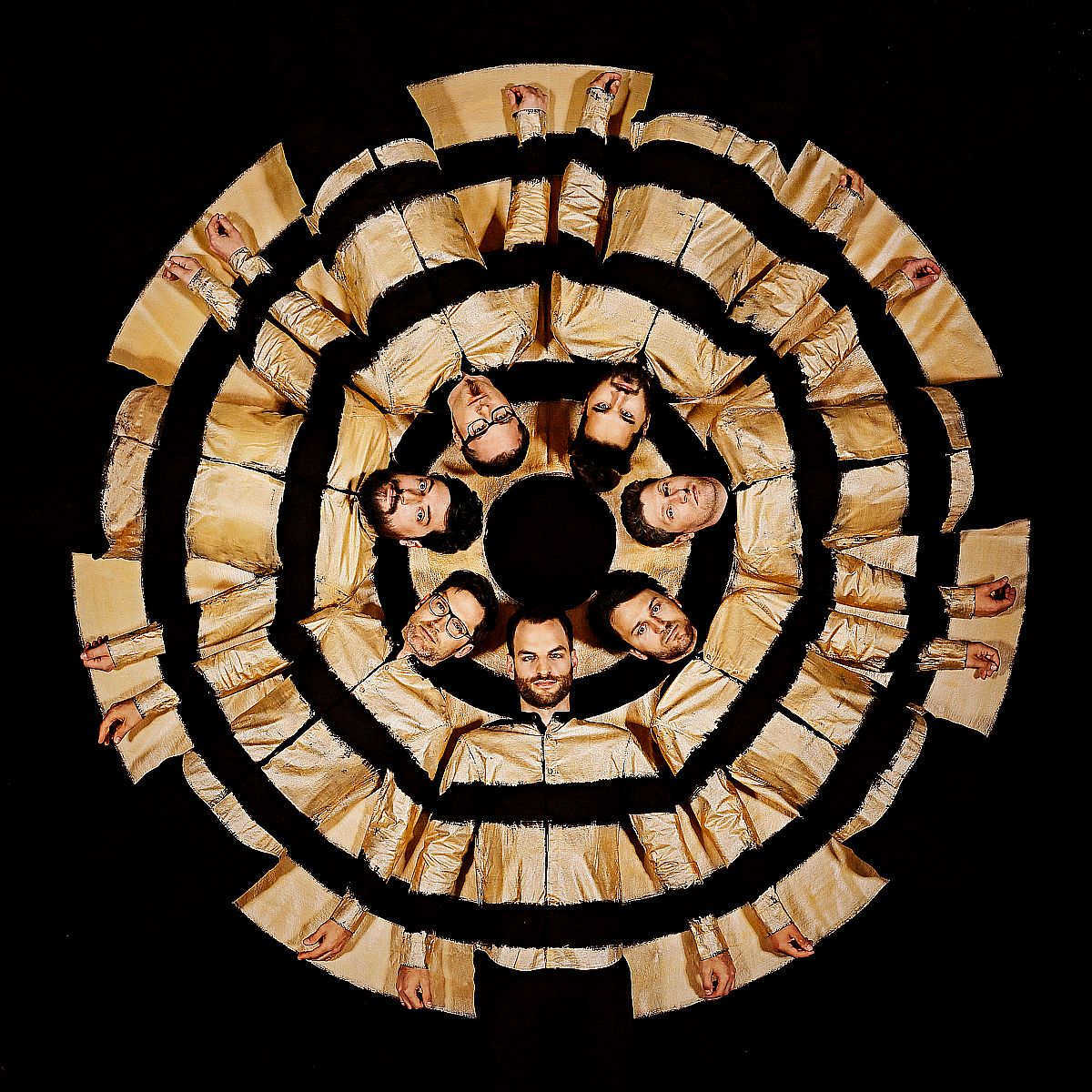 Said spirit shapes the detailed, often driving rhythms of Niki Dolp and Mathias Koch, which at times expand into a true fireworks of sound through metal plates, Asian gongs and other percussion instruments. Oliver Potratz and Lukas Kranzelbinder excel with virtuoso variety and seamless changes of double basses and e-bass, plucked and bowed passages, subtle moments and dynamic force. Once again, the Moroccan desert bass of the Gnawa Brotherhoods, the Guembri, re-emerges, after all, Kranzelbinder has made it its second trademark in recent years. The unique rhythm quartet spurs the winds to wide improvisational arcs and sweeping eruptions. “Mario Rom, the trumpeter who always looks so introspective on and off the stage, plays solos that are unrivaled in Europe – calm, persistent, imaginative, virtuoso,” wrote Ulrich Stock in his Zeit article. In fact, you can lose yourself in Rome’s game, just listen to So He Spoke or I Can Feel The Heat Closing In.

At the trumpeter’s right side Clemens Salesny increases to ever greater form. On Gris Gris he plays not only his regular alto saxophone, but also the legendary Buescher model, which was built instead of a curved one, and was once called “Stritch” by Rahsaan Roland Kirk. Salesny’s furious stakes put the title track on the road as the lead of the album and ring the finish line in the hidden track Like Water Falling Down With A Thousand Spirits. Tenor saxophonist Johannes Schleiermacher continues to be responsible for the lower registers. Again he captivates with a personal tone, an enormous tonal range and his own language; The latter also includes vehement, but never beyond aiming shootouts into free modulations. The already in the apron on 2.8. In addition, Schleiermacher presents himself as an accomplished flute player. Gris Gris is an exuberant, high-energy sound object that marks another development stage in the already profiled overall work of Lukas Kranzelbinder and Shake Stew. The original facets of this album reflect the unbridled urge to take a musical stand. Not only in terms of the development of jazz, but also in terms of the social relevance of the genre. How Shake Stew succeeds in addressing these statements at the same time to the head and stomach and to bring both receptors into blissful state is impressive.

+ Hidden Track: Like Water Falling Down With A Thousand Spirits