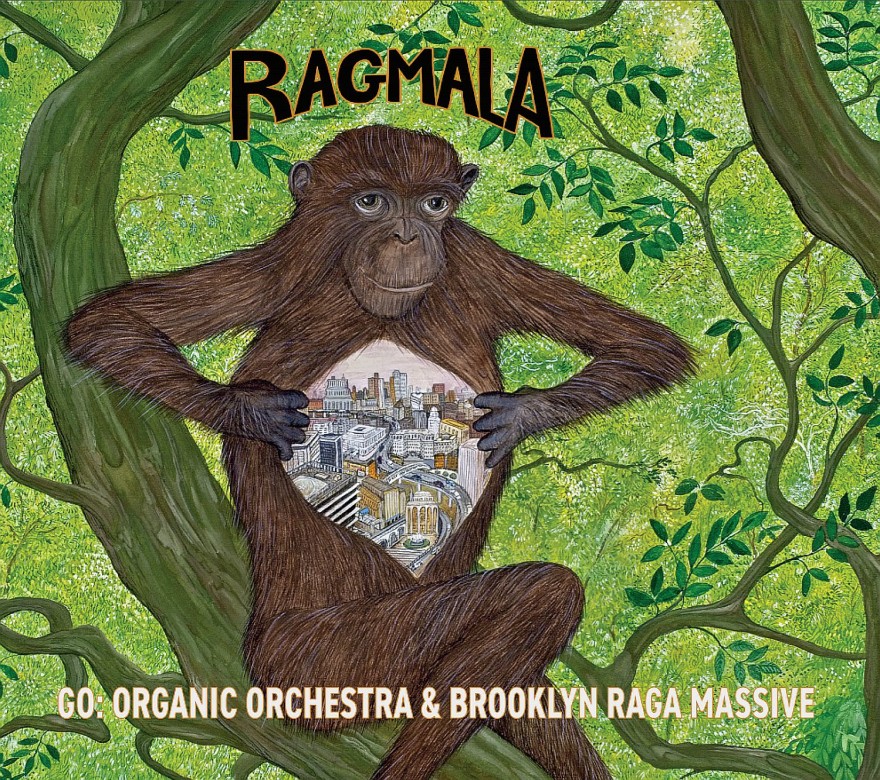 What would a “Future Orchestra” look – and more importantly, sound – like? Master percussionist, composer and bandleader Adam Rudolph has created an illuminating and original answer to that question with his innovative Go: Organic Orchestra. On the remarkable new album Ragmala – A Garland of Ragas, the Orchestra joins forces with the boundary pushing Indian classical musicians of Brooklyn Raga Massive, showcasing Rudolph’s game-changing vision. The 40-piece ensemble embraces diverse cultures, genders, traditions, generations and voices to create a breathtaking album that invents a communal way forward while reverberating with echoes of the recent and ancient past. Drawing parallels with another groundbreaking and singular epic, Ragmala has already been referred to as a “Bitches Brew for the 21st century” by Ahmet Ali Arslan of Açžk Radyo Istanbul.

“This album feels like the culmination of everything I’ve been reaching for in my creative pursuits,” says Rudolph, no small claim from someone who’s been a pioneering voice in jazz and world music for more than 40 years. “With this music I can hear the humanity of all these different musicians shine through, and  their voices bring forth something that’s never existed before.”

Continually evolving over the past two decades, Go: Organic is an ensemble boundless in myriad senses; in its range of influences, its adaptability, its scale, its potentiality and most importantly its imagination. Though Rudolph’s inventive approach to composing and conducting is challenging, it also opens the band up to infinite variation. That adaptability is dazzlingly illustrated by the contributions of Brooklyn Raga Massive and the way that two already awe-inspiring groups merge into a boundary-blurring sonic experience.

Brooklyn Raga Massive (BRM) with their open, inclusive spirit have been making waves in the music world by bringing Indian Classical music to new territory, collaborating with minimalist composers, Afro-Cuban maestros and jazz legends. Violinist Trina Basu, a longtime member of both Go: Organic and BRM states, “In the history of Indian Classical music collaborations, we have never heard anything recorded like Ragmala.  We feel this is a new high-water mark for all of us.”

While the music of Ragmala draws inspiration from a wealth of traditions – the globe-spanning rhythmic influences that converge in Rudolph’s music as well as the Indian classical music explored by the members of Brooklyn Raga Massive (BRM) – the resulting sound is something entirely new. The 40-piece orchestra speaks in a hybrid tongue that reflects the immigrant experience, with diverse cultures congregating and enriching one another in profound and surprising ways.

That trove of voices is channelled into a transcendent, harmonious sound through the groundbreaking improvisational conducting approach invented by Rudolph, which allows each member’s distinctive identity to shine through while weaving together into a single vivid tapestry. On Ragmala, the cumulative image is stunningly inclusive, comprising men and women, a range of ages from teenagers to octogenarians, and a multi-cultural array of ethnicities that can be traced, directly or through heritage, to such far-flung locales as Japan, Dominican Republic, Korea, Morocco, China, India, Argentina, Canada, West Africa, Brazil, Iran, Jamaica, Cuba, Mexico, and Western and Eastern Europe.

Bennie Maupin, the legendary reedist known for his work on Miles Davis‘ Bitches Brew and in Herbie Hancock‘s ensembles, coined the term “future orchestra” to describe the Go: Organic Orchestra, of which he was an early member. Rudolph embraced the sobriquet for many reasons, he says, not least of which was “the idea to create a musical environment for individualism and spirit, for the voice of the musicians and a real essential feeling to come forth in a large, communal way. With our ever-widening sense of experience, of who we are and who we interact with as humans and as artists, I found myself asking: how do we create something new together?”

Rudolph has assembled and led versions of the orchestra around the globe, but the musicians on Ragmala represent some of his closest and most long-standing musical relationships. That longevity is the result of a deep commitment to the music and Rudolph’s unique methodology, leading to a keen sense of exploration and discovery. “Everyone here is wholly committed to creating something together,” Rudolph says. “They’re here because of this sense of musical community that everybody feels. They all share the same excellence, rootedness, virtuosity and openness.”

The members of the adventurous BRM collective are deeply steeped in the traditions of Indian classical music. They refuse, however, to be restricted by it; the idea behind the collective, birthed in 2012 in a Prospect Heights bar, is to open the often rigid and hierarchical culture of the music to experimentation and cross-cultural collaboration. Ragmala marks the collective’s most ambitious effort to date in the musical movement that the New York Times, Wall Street Journal and New Yorker have recognized as a “Raga Renaissance.”

According to BRM guitarist David Ellenbogen, who co-produced Ragmala, the possibilities offered by Rudolph’s music scratched the very itch that led many of them into BRM’s more exploratory fold to begin with. “I always had a theory that Indian classical, jazz, West African music and so on could have a synergistic relationship,” Ellenbogen says. “But after spending decades looking through record libraries, I found very few recordings lived up to the potential of these great traditions. I’ve spoken to other musicians on this album and they said the same thing when they heard these tracks: This is the music we’ve been searching for.”

Any simplistic notion of a “cross-cultural” hybrid, of some Indian-inflected jazz music, is instantly dispelled from the opening moments of Ragmala. “Mousa Azure” is built around the exultant voice of Gnawa master Hassan Hakmoun, whose collaboration with Rudolph began 30 years ago. Bringing down the spirits of Afro-Moroccan trance, Hakmoun sings a traditional Gnawa song over a surging rhythmic bed, atop which Rudolph cues in stabbing strings and soaring flutes as vocalist Samarth Nagarkar soulfully responds. The mood then switches on “Rotations,” a piece previously recorded by Rudolph’s smaller band Moving Pictures on its 2017 release Glare of the Tiger. Here that irresistible groove bursts forth, albeit with overlapping rhythms that intensify the whorl of sensation.

Each piece on this stellar recording transmits its own feeling, occupies its own temporal and emotional space. There’s the spare, austere yearning of “Lamentations;” the sly wisdom of “Turiya;” the rapturous funk of “Africa 21;” the altered-consciousness levitation of “Sunset Lake.” And so on for all of the album’s 20 pieces, each with its distinctive range of emotion, so vividly communicated to the listener.

Combining cultural traditions at an indivisible genetic level is something that BRM co-founder and violinist Arun Ramamurthy says comes naturally to the collective’s members. “A lot of us are Indian-Americans and have deeply studied Indian classical music, but we all have other musical influences inside of us. BRM’s mission has always been to bridge cultures, to bring all of these musical traditions together and find common ground so we can all play as one community – because it’s all one thing. This record is exactly that, and I believe that it really brings out the individual sounds and different backgrounds that each of the artists are coming from, and they’re all melding together in this beautiful union. It was a match made in heaven.” 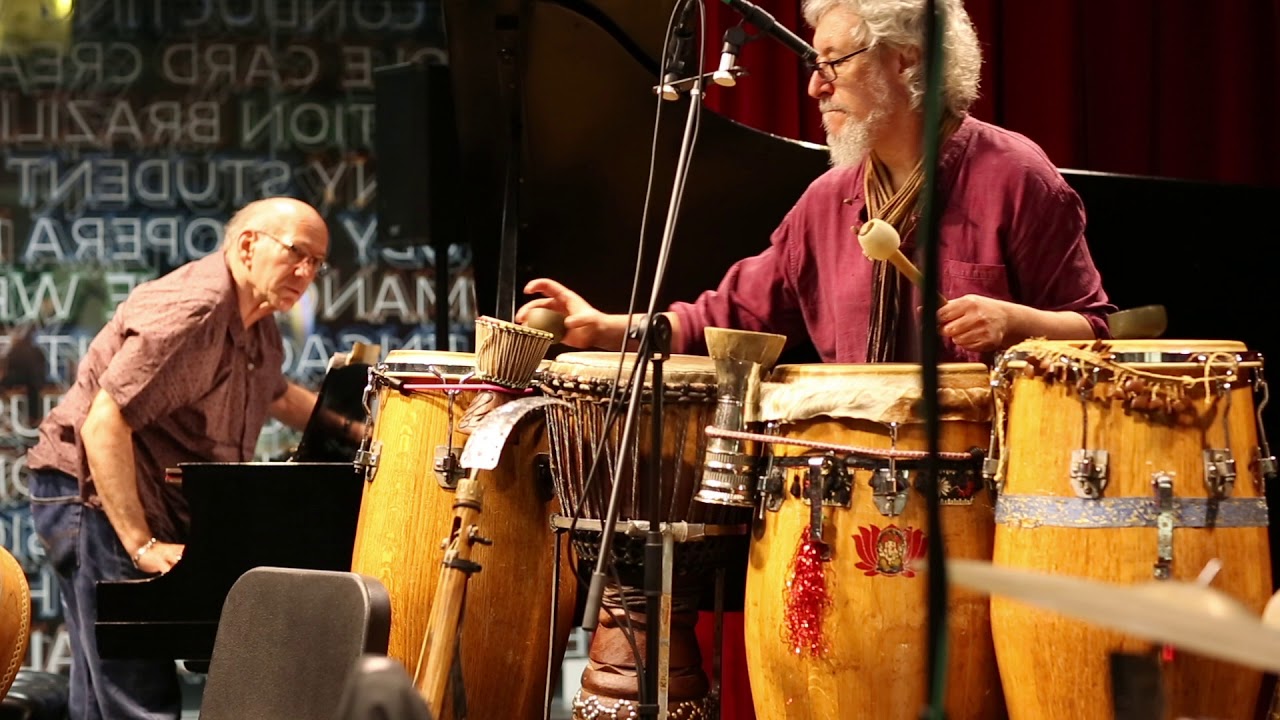 picture: courtesy of the RareNoiseRecords

Over the past four decades, visionary composer, improviser and percussionist Adam Rudolph has been hailed as “a pioneer in world music” by the New York Times and “a master percussionist” by DownBeat magazine. He has released more than 30 recordings under his own name featuring his groundbreaking compositions and tradition-bridging percussion work. Rudolph composes for his ensembles Moving Pictures, Hu Vibrational, and Go: Organic Orchestra, a 30-piece group for which he has developed an original music notation and conducting system, teaching and conducting hundreds of musicians worldwide in his concept. Rudolph has performed with Don Cherry, Sam Rivers, Pharaoh Sanders, Muhal Richard Abrams, Shankar, Wadada Leo Smith, Philip Glass, Jon Hassel, Omar Sosa and Fred Anderson. He toured and recorded extensively for 25-years with the legendary Yusef Lateef.  Rudolph is also known as one the early innovators of what is now called “World Music.” In 1978 he co-founded Mandingo Griot Society, one of the first groups to combine African and American music, and in 1988 he recorded the first fusion of American and Moroccan Gnawa music with Sintir player Hassan Hakmoun.

Go: Organic Orchestra is a 21st century vision of a “future orchestra”.  Artistic director Adam Rudolph’s prototypical approach to composing and improvisational conducting embraces music forms and cosmologies from around the world.  Using a non-linear score with his unique approach to rhythm as the seed material, Rudolph improvisationally conducts the musicians in concert. This creates spontaneous orchestrations which serve as both context and inspiration for the musicians’ improvisational dialogue. Over the past two decades Rudolph has taught and conducted hundreds of musicians in the Go: Organic Orchestra concept throughout North America and Europe. Over the years he has performed with Go: Organic Orchestra ensembles in New York, Los Angeles and Austin, Naples, Palermo and Istanbul. Click here to view a list of performance residencies. 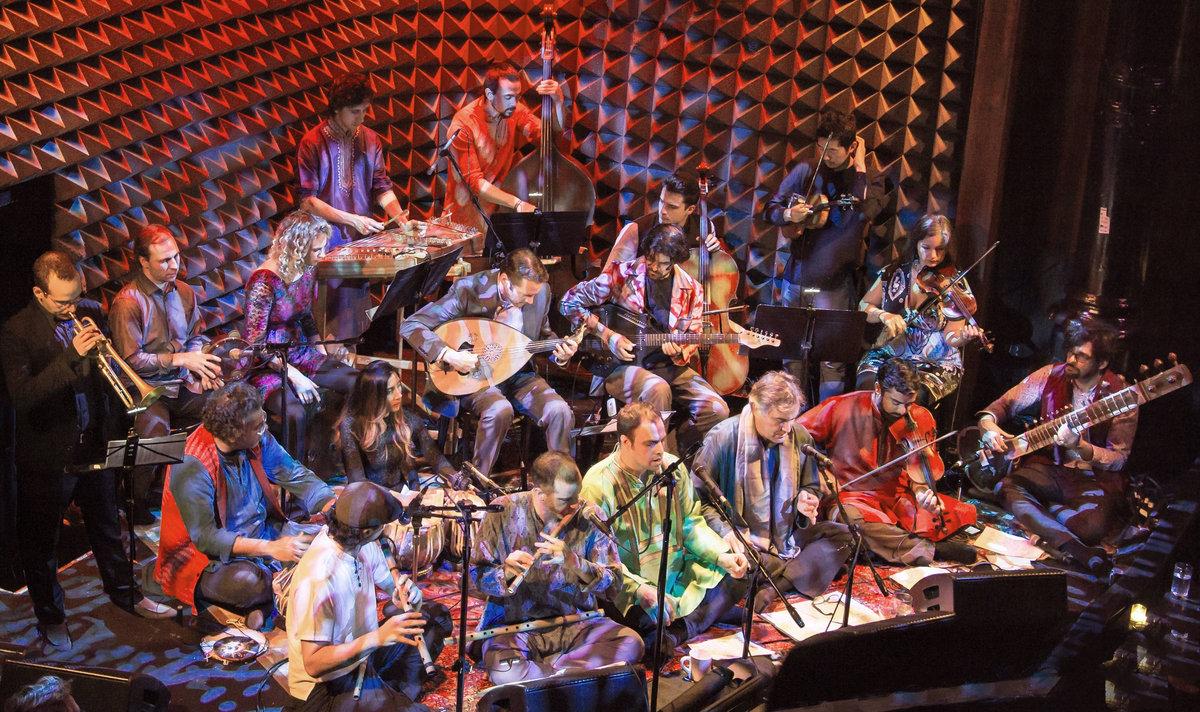 Photo credit: Bandcamp/Courtesy of the Artist

Praised by the Wall Street Journal for “expanding the notion of what raga-the immersive, epic form of Indian music-can mean” and dubbed the “leaders of the raga renaissance” by the New Yorker, the fun-loving members of the Brooklyn Raga Massive collective have made huge waves for “preserving the past while blurring genres in an inventive spirit” (New York Times). Brooklyn Raga Massive (BRM) is an artist collective dedicated to creating cross-cultural understanding through the lens of Indian classical and Raga inspired music. It is comprised of forward thinking musicians rooted in both traditional Indian and South Asian classical music, as well as cross-cultural Raga inspired music. The culturally inclusive nature of BRM has not only built a strong community, but has become an incubator of new music collaborations with sounds indigenous to Brooklyn.