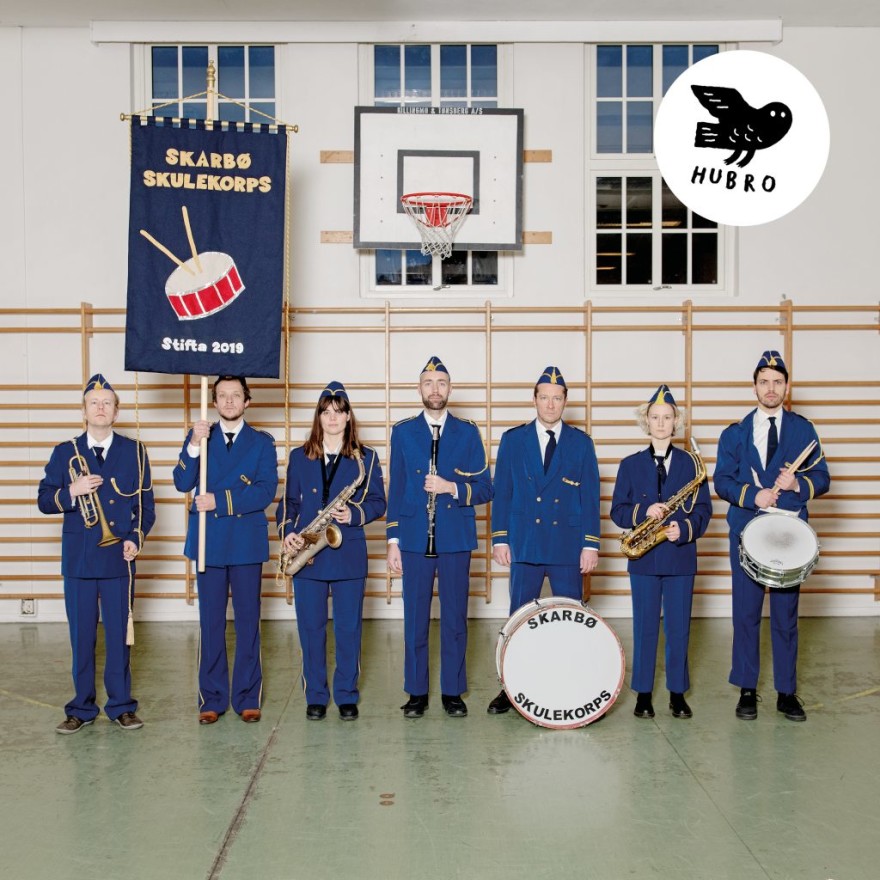 Øyvind Skarbø doesn’t just think outside the box. With this drummer/composer, there is no box.Two years ago when a member of Øyvind Skarbø’s trio 1982 decided to leave the band after 11 years, Skarbø had no idea what a gift it would end up being. At the time, the drummer/bandleader felt unsettled, but it set Skarbø on a path of re-examination and work that resulted in Skarbø Skulekorps – a seven member unit – and their first recorded outing.

The album – Skarbø Skulekorps – an ambitious nine tracks that make up a double LP (and single CD) – is a culmination of much dedication to a musician’s craft. Not held back by any constraints of musical preconceptions, Skarbø is not afraid to step off the cliff into a genre-less wonderland and take chances.

They even offers up a steel guitar solo on Pilabue (performed by Johan Lindström), supplying a moment of country comfort. But don’t get too comfortable for too long. A moment later, odd times and blaring horns escorts the steel guitar off into the sunset with a whimper.

Right out of the gate with 1-555-3327, Skarbø treats his listeners to something he’s never done on a record: vocals and lyrics! So named because the song is vaguely about inventor Nikola Tesla, known to have an obsessive-compulsive disorder around the number 3, who died in a hotel room number 3327.

The song opens with R&B horns blasts against Skarbø’s backbeat, heralding three guest singers from the popular two-time Grammy winning Norwegian folk-rock band Real Ones. On the same track, the wistful sounds of the steel guitar cry out in the background. There is also an apperance by a local marching band, leading the listener into a multi-layered musical journey.

Hiring Real Ones represented a full-circle moment for him, as Skarbø subbed with the band at 24.

“I wanted to write something more elaborate this time,” says Skarbø. He already recognized 15 years ago an urge to compose, but never took the time, or dared to commit to it. Two years ago, when 1982 folded, he had to rethink things, and instead of resigning began to invest serious study time. He spent seven months writing the material for this album. He approached it as a composer, not really as a drummer.

Notable is Lysets Hastighet, (“Speed of Light”), a track dedicated to his friend, guitarist/composer Ruben Machtelinckx‎ with whom he’s played for a few years. On this melodic track, the drummer/composer is just holding down the fort as his players take on the spotlight. “ The drums on this record is really the last thing,” he says. “I spent so much time as a composer, producer and organising everything. As a drummer, it was like showing up at the session and I didn’t know what I was going to do.”

Don’t let him fool you – there’s some stellar drumming on the record. Take a listen to Turnamat, Farrier and the Hoof, and the backbeat and groove on Kadó.

Skarbø should be known to fans of Hubro from his four albums with the trio 1982 (with Nils Økland and Sigbjørn Apeland), as well as three recordings with the band Bly de Blyant (with Hilmar Jensson and Shahzad Ismaily). Others may know him more from the quartet Inland Empire (with Kris Davis, Fredrik Ljungkvist and Ole Morten Vågan) or as a former member of the Håkon Kornstad Ensemble.

While Skarbø made a name for himself in jazz and free improvised music, at about 29, he acknowledged he had suppressed his love of backbeat-based music and realized he had to retrain himself. (Check out some serious timekeeping on Four Foxes.) “I started woodshedding on the drums again, and I’m still working on it.” Skarbø says. “Now I’ve brought the same approach to composition”.

Ideas for this record have been formulating for years, the musician says. Gliploss has been festering for ten years. The rhythmic tune opens with a couple of false starts with accompanying obscenities that Skarbø decided to keep.

Skarbø says the final track, 50 MB RAM, was perhaps slightly more challenging than the rest since he simultaneously contributed vocals and banjo – both firsts for him on a record. But this last tune will send you off on a spirited flight with its steel guitar, banjo strums, vocal chorus and finally the majesty of the drums.

He gives credit to engineer/mixer Jørgen Træen for the album’s sound quality, who recorded it all at Duper Studio in Bergen, Norway. The mixing process turned out to be very creative and spontaneous. “It’s the first album of mine that’s more produced,” Skarbø says. “In the sense that most of the other records I’ve done were going for a more natural, acoustic sound, on this one we took a lot more liberties in the mix. Jørgen thinks very musical, as opposed to technical, and isn’t afraid to drastically change things around.”

He also gives kudos to all the players who accomplished the 3-day recording schedule with two or three take performances. They cut mostly live with a few overdubs. “They are all amazing. Everyone brought a lot to the music,” he says, adding that the diverse backgrounds of the players added a lot to his project. “Sometimes when things are as written out as this, that’s not always the case.”

For longtime followers of Skarbø, this collection will bear many delightful surprises. For those just becoming hip to this artist, welcome to a creative force that will captivate and enchant your musical imagination.

All music composed and arranged by Øyvind Skarbø (TONO).