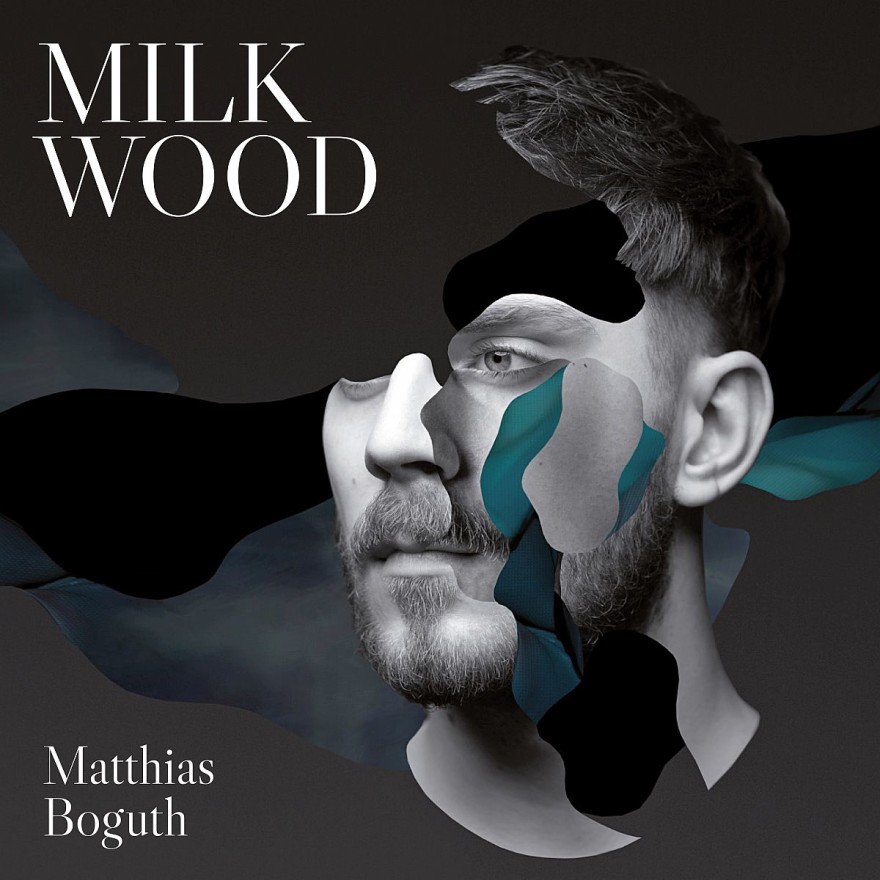 Such a debut is rare. Matthias Boguth, born in 1996, has been studying at the Leipzig University of Applied Sciences for three years and has already gained some stage experience as head of various bands and projects, but ahead of Milk Wood he released no album yet. All the more impressed now the depth and stringent variety of the production. Undoubtedly, Boguth has given many conceptual and compositional thoughts, as well as like-minded and sensitive musicians, and with Joh Weisgerber (aka Monojo) also has a producer at his side who has a keen sense for timbres and aesthetics. Together they measure a supposedly familiar terrain, namely the setting of poetry from the pen of a writer, but amaze with unfamiliar musical perspectives. Boguth’s individual, genre-busting sonic language goes far beyond jazz, sometimes referring to Joe Jackson’s intelligent-catchy melody or the playful complexity of progressive rock. These are not conscious references,

Grown up in the surroundings of Munich, Matthias Boguth actively came to music through friends. As a primary school student, he played extras at the Bavarian State Opera, but had nothing to do with singing and thus had no direct influence on his career today, as he says today. After the obligatory recorder he first learned piano, turned his back on the Gymnasium at the age of 16 to enrol at the Neue Jazzschool München. In the entrance exam, Boguth focused on vocals, as he had previously worked as a singer and fun with various indie pop rock bands. “Actually, I wanted to do pop music at NJM,” Boguth grins in retrospect, “but the first piece we did in class was Miles Davis’ Kind Of Blue.” He deepened his fascination for jazz through visits to various concerts. In 2015 he went to the University of Music and Performing Arts in Leipzig.

At an early stage, Matthias Boguth has established himself in the position of a bandleader. “As a singer you are much less often asked if you want to participate somewhere, so it was and is usually the case that I initiate projects myself.” In addition, Boguth is a passionate and also very productive composer. “I constantly write down ideas that I get inspired with in everyday life,” he explains his way of working. “Triggers can be traffic and other sounds, but also observations, such as structures of buildings.” Turning visual impressions into sounds is probably a rather unusual approach. “Sometimes I make things so abstract that I can not remember where the original idea came from, but that’s not important. I sort the notes later for shapes, Harmonies and melodies and this ‘dictionary’ I then resort to the actual composing back. That’s why working on a piece can be done relatively quickly. “

Boguth’s declared initiators include Theo Bleckmann, John Hollenbeck and Michael Wollny. “Here I start from the composition. Bleckmann has a very pure sound, Wollny writes understandable, clear forms, all three are out to serve the music. “A high degree of clarity, no matter how versatile, variable and full of twists the piece is ultimately in itself, enthused Matthias Boguth. This attitude contributes a lot to the special character of the Milk Wood. On the one hand, Matthias Boguth chooses a large span in the choice of his vocal means, but on the other hand he never drifts into exalted or even artificial spheres. His sonorous baritone can suddenly turn from warm timbre to emphatic to sharp expression, sometimes playing with free, suggestive sounds or grand gestures, always keeping the composition in view.

When asked about the quartet, Boguth answered first: “I really wanted to play with this band.” He has known the double bass player Stephan Deller for several years now and appreciates his sound playing and calm charisma. Wollny’s master student Philip Frischkorn (Eva Klesse Quartet, among others) also impresses with his virtuosity and personal expression inspired by European classical and modern music. Drummer Philipp Scholz, on the other hand, has experience with poetry settings, as he has already toured with Nora Gomringer. He knows how to deal with spoken and sung words accordingly sensitively.

Only when the band was established, Boguth began to work out his compositions, of course, also remembering the special qualities of his partners. In doing so he set on detailed, yet tightly-defined lead-sheets to leave room for interaction and spontaneous ideas. In June 2017, Milk Wood celebrated its stage premiere, in the following months more performances were added, which developed thanks to the open game again and again other facets. In the Traumton Studio, the quartet recorded several versions of the songs within two days, ultimately opting mostly for the takes with a somewhat calmer mood. Already during the recordings, Joh Weisgerber contributed detailed production ideas, including occasional electronic effects, everyday and nature sounds. Special vocal colours (for example, in The Corner and What Seas Did You See ) Boguth has sung directly in the studio, some of them even later accentuated with Weisgerber even more. The idea was to build a sound bridge from the band back to the radio play character.

Dylan Thomas discovered Boguth through Christopher Nolan’s film Interstellar , in which a poem by the writer occurs. “I had been looking for foreign texts before, as a vehicle for my own development as a composer,” says Boguth. The original is Thomas’ Under Milk Wood, a radio play from 1954, which tells a day in the Welsh coastal village Llareggub. “Thomas describes very sonically how people wake up and go through the day and evening. Nothing spectacular happens, rather small everyday scenes.” For the album, Boguth picked out individual motives to turn them into songs. The compression leads to some welcome breaks, but the chronological course from midnight to midnight kept Boguth. From him now result some relatively quiet pieces at the beginning of the CD, while in the second third stronger energy boosts to expressive passages light up. Like in other parts of the world, in Llareggub the day ends in a bar with quite an effervescent moment, before finally stepping out into the night that belongs to the owls.

Boguth’s sonorous, versatile voice, the nuanced to powerful playing of the musicians and the dramaturgy bows of music draw the listener more and more into the story (s). The partly spoken intro is followed by the atmospheric The Draper with restrained vocals, impressionistic piano and mysterious, swept bass passage. Significantly inspired by jazz sounds Whose name Was Tom , here intoned Boguth melodious melodies in addition to melismatic upheavals. The first striking, rock-inspired energy boost surprises with almost raid-like dynamics in What Seas Did You See. The melody of When I Wake approaches advanced pop and yet remains grounded in jazz, the euphoric-looking hook line of There’s A Face contrasts with the initially lurking, then increasing middle section of the song.

Matthias Boguth says that he has always enjoyed moving in many genres and, among other things, appreciates this talent to his band partners. In fact, Milk Wood is a successful example of non-dogmatic musical openness. For all versatility, the album in itself looks round and consistent. A determined and remarkable debut of a wise singer and composer whom one can prophesize a great future.

You can BUY The Milk Wood CD here: or Download here :