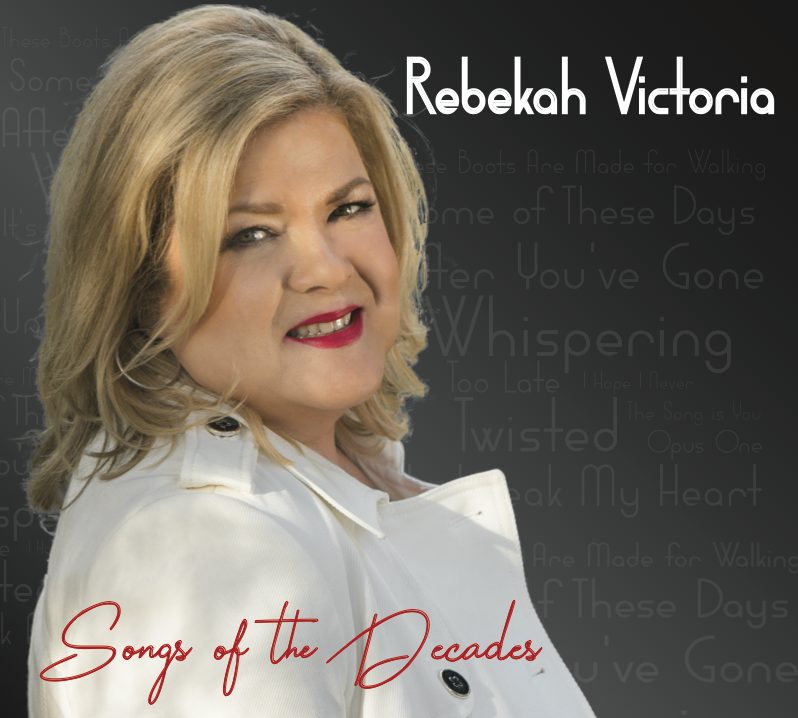 Victoria collaborates with acclaimed trombonist, composer-arranger and bandleader Wayne Wallace and an assemblage of two-dozen musicians (including guest vocalist Kenny Washington) for a panorama of songs from each decade of the 20th century

“[Rebekah Victoria] has a large soprano range and her diction is right on.” – Herb Young, IAJRC Journal

“You can tell she has a complete understanding of every word she sings.”  – Dan Singer, Singer’s Singer

As a jazz singer, Rebekah Victoria’s performance repertoire tends to come overwhelmingly from the era of the Great American Songbook: the 1920s, ’30s and ’40s. As she was preparing to record her second album, however, Victoria was inspired to widen her musical perspective in terms of both time periods and popular styles. Songs of the Decades, her investigation of the music from each decade of the twentieth century, will be released June 21, 2019 through Patois Records.

If the album is retrospective, though, it is the furthest thing from nostalgic. “I wanted to make these songs different- I wanted them to sound very new and fresh,” says Victoria, who is based in the San Francisco Bay Area. “The idea was to make them as much fun to listen to now as they were in their day, when they were big hits. For the people that really know these songs, they’ll get a kick out of the differences.”

She also had another, more serious priority for assembling Songs of the Decades. “There’s a theme running through the songs,” she says. “In one way or another, most of them connect to the #MeToo movement that’s happening today. I wanted the album to speak to that.” In other words, Victoria combed through the music of the past and found that it was not only still fun, but still relevant.

Wayne Wallace, the Grammy-nominated trombonist, composer-arranger, and bandleader who is also the head of Patois Records, acted as Victoria’s partner for the album. He co-produced it, wrote all of its arrangements-often incorporating elements of Latin jazz, his speciality-and assembled its superlative cast of 24 musicians, including improvising vocalist Kenny Washington, Wallace’s band-mates from his own various projects, and a string quintet that features members of the San Francisco Symphony.
“I was so happy with how it all turned out,” Victoria says. “Wayne’s arrangements really captured the freshness I wanted, and the musicians he chose were just fantastic. It was a great experience overall.”

Songs of the Decades does not present its selections in chronological order; Victoria and Wallace sought to create a flow that would emphasise the variety of the material and the versatility of the singer. That said, the album opens with its oldest tune. “Some of These Days,” written in 1910, has a cavalier quality that Victoria injects with sultriness. But its solo section also suggests a subtle, sobering edge, a warning of the consequences of disrespect.

The consequences of disrespect are front-and-center of “These Boots Are Made for Walking,” and there’s no subtlety about it. The album’s ’60s episode gets a down-and-dirty treatment, with earthy Hammond organ and guitar (courtesy of Frank Martin and Rick Vandivier, respectively) and soulful horn charts that drive home Victoria’s taunting vocal.

“After You’ve Gone” is perhaps the recording’s most recognisable jazz standard, and the musicians tackle it as such. The 1918 Layton-Creamer classic here becomes a breezy swinger and affirmation of the singer’s self-worth, augmented by Mary Fettig‘s jaunty clarinet solo and Victoria’s supremely confident phrasing and time feel. Though it’s probably best known through Joni Mitchell’s version two decades later, “Twisted” began life in 1952 as an Annie Ross vocalise riff on a Wardell Gray blues solo. Its (title-appropriate) twists and turns give Wallace a place to put his finest and most elaborate Latin-jazz flourishes, including a double-barreled solo chorus from the trombonist. (Wallace and Kenny Washington also provide the spoken-word responses to Victoria’s sung lines.)

There’s also a trace of a Latin accent on “The Song Is You,” written by Jerome Kern and Oscar Hammerstein II for a 1932 musical. More than that, however, it takes on a bebop sensibility in Victoria and Wallace’s hands. The singer drops a delivery with echoes of Ella Fitzgerald or Sarah Vaughan, with solos by Fettig (now on alto sax) and pianist Joe Gilman that are steeped in delectable modern jazz language.

Victoria singles out “Un-Break My Heart” as a particularly challenging tune for the purposes of this album. It’s not because of any technical hurdles, but because the 1996 Toni Braxton hit (written by Diane Warren) is Songs of the Decades’ most recent selection, and therefore its most familiar. “That’s a pop song that everyone knows,” she says. “Finding a way to refresh that one was difficult, but that’s part of the fun of this album.” Ultimately, the song receives a subtle re-harmonisation and bossa nova beat, with a guitar solo from Vandivier that’s also inspired by Brazilian music-and a sly interpolation of Neil Young‘s “Only Love Can Break Your Heart.”

“Whispering” was an iconic hit song of the 1920s. But here it gets thoroughly lifted out of that time with a sexy mambo setting, a vocalese verse from Victoria (decidedly divergent from the album’s feminist theme), and an expansive scat solo from Kenny Washington-not to mention a modulation (also in vocalese) to “Groovin’ High,” Dizzy Gillespie‘s revolutionary bebop contrafact of the tune.

A gentle Afro-Caribbean percussion treatment greets Carole King‘s “It’s Too Late,” representing the 1970s. While it’s drummer Colin Douglas and percussionist Michael Spiro who shape the performance, they’re assisted by beautiful solos from Vandivier and pianist Murray Low, as well as a delivery from Victoria that takes Billie Holiday-like liberties with its contours.

Like “Whispering,” Sy Oliver and Sid Garris‘s “Opus One” (from 1943) declines to engage with Victoria’s theme of women’s independence and empowerment. “This one’s just for fun,” she says. True to her word, it concerns itself with timeless, dance-able swing, heightening the effect by becoming a cleverly plotted medley with Charlie Shavers’s 1938 jazz standard “Undecided.”

Songs of the Decades closes with its 1980s installment: “I Hope I Never,” a tune by the New Zealand new wave band Split Enz (the only non-American song on the album). Here Wallace deploys the string quintet, which adds piquant emotional release (and a surprising solo from violinist Eugene Chuklov) to Victoria’s remarkably restrained soprano.

About Rebekah Victoria
Rebekah Victoria grew up in her family-owned nightclub in Los Altos, California, singing with her father’s Greek band. While she chose to get her college degree in business, she also took formal singing lessons and theatre classes, learning both classical and Broadway singing techniques. She took a job as a real estate broker but supplemented her income with musical theatre and even jobs as a singing waitress.

After raising her daughter to adulthood, Victoria began to engage her after-hours singing career more seriously. Deciding that her heart-and vocal range-really belonged to jazz, she formed a band called Jazzkwest and began performing regularly in clubs and other venues in the San Francisco Bay Area, attracting a following that eventually enabled her to record her debut album, #OldFashionedTwitterTwit, in 2016. While the retirement of her key collaborator in Jazzkwest presented a challenge, Victoria soon had a tete-a-tete with San Francisco jazz maven Sheryl Lynn Thomas-who connected her with Wayne Wallace, beginning the two-year task of creating Songs of the Decades.

“It’s been a really great process,” Victoria says. “I hope it continues on to the next one.”