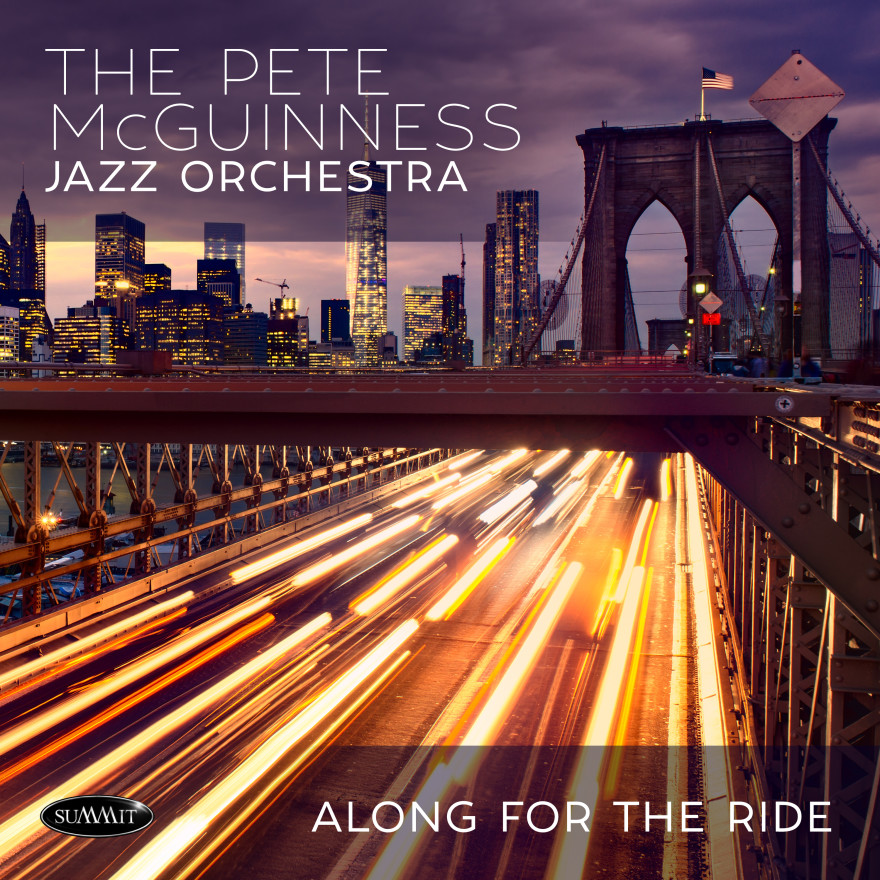 Three-time Grammy-nominated trombonist/vocalist Pete McGuinness pens stunning arrangements of classic standards along with vivid original compositions to spotlight his remarkable ensemble on Along For the Ride, due out June 7 on Summit Records

“A musical multi-threat… McGuinness lays out music that is modern-minded yet swinging.” – Zan Stewart, The Newark Star-Ledger

“McGuinness [blends] big-band dynamism with structural finesseŠ His deft use of harmony and color is everywhere exceptional..” – Jack Bowers, All About Jazz

After 13 years and two critically acclaimed albums, The Pete McGuinness Jazz Orchestra has begun to feel like a well-oiled machine – especially considering the fact that its component parts are some of the most skilled musicians on the New York City jazz, studio and Broadway scenes. So it’s understandable that McGuinness chose Along For the Ride as the title for his big band’s dazzling third release; at this point, Pete clearly feels that he can set his music in front of them and let them go. But one listen to the album’s intricate, expressive arrangements and compelling original compositions, not to mention the leader’s own virtuosic trombone soloing and stirring vocal turns, leaves no doubt who’s behind the wheel.

For Along For the Ride (due out June 7, 2019 on Summit Records), McGuinness has crafted his most diverse and stunning line-up of big band charts to date. The repertoire ranges from familiar standards by George Gershwin and Michel Legrand to an impressively varied slate of original pieces that reach back to classic big band swing and reach forward into modern programmatic concepts. Throughout, the constantly surprising set list reveals McGuinness as one of the most versatile and creative bandleaders in contemporary jazz today.

“Along for the Ride” is more about the band than it is about me,” McGuinness insists modestly. “At this point, I know the band, the players, and their abilities so well that I’m confident when I write something challenging that they’ll execute it brilliantly. I trust them totally, and the studio experience was incredibly fun because once I stomped off a chart I could just enjoy how amazingly the band executed my music.”

The formation of the Pete McGuinness Jazz Orchestra was the culmination of a life-long dream for the bandleader. He fell in love with the classic swing band sound as a kid, delving into the record collection of his father, who had been a radio DJ in the early 1950s. “It became my absolute passion,” McGuinness recalls. “When I was young I basically wanted to be Duke Ellington when I grew up. I realise those were big shoes to fill for a 13-year-old, but it’s what I was striving for.”

McGuinness got his first real taste of the power of playing with a large ensemble as a trombonist. He made his New York City/Blue Note club debut with the Buddy Rich Orchestra (directed by Steve Marcus). He also worked with the Woody Herman Big Band after that leader’s passing, though he was able to play with the Lionel Hampton and Jimmy Heath bands under the batons of those jazz giants. More recently he spent a decade guesting occasionally with the Maria Schneider Orchestra, the leading modern purveyor of the big band tradition.

McGuinness’ history-spanning love of the big band sound places him directly in the center of that timeline, combining the vigorous, full-blooded swing of the classic era with the vibrant color palette and narrative sweep of the more contemporary approach, which he studied with one of its innovators, Bob Brookmeyer. “A lot of arranger/composers stay within a very narrow confine,” McGuinness explains. “I’m not such a purist; I like a little more variety. Bob Brookmeyer encouraged me to take chances, but by the same token I often find I have one foot in the past. Along For the Ride is a mosaic of my entire musical sentiment.”

The two worlds collide in a sense on the album’s opener, a cleverly deconstructed rendition of “Put on a Happy Face,” the (some might say excessively) cheery earwig from Bye Bye Birdie. McGuinness completely reinvents the tune, putting a surprising and sophisticated twist on a song that, in its original form, might come off as corny. “Sometimes a tune sticks in your ear for reasons that are personal,” McGuinness says. “It’s the kind of tune that Chet Baker or Gerry Mulligan or Sonny Rollins would have recorded; they all did these cutesy songs that nobody would touch and put their personal stamp on them, and I love that.”

McGuinness steps to the microphone for the first time on “You Must Believe In Spring,” a romantic masterpiece in tribute to the recently deceased composer, Michel Legrand. He also showcases his Chet Baker-inspired vocal prowess on the lovely ballad “May I Come In,” which also features an emotional trombone solo. His virtuosity is on jaw-dropping display on the blistering original samba “Point of Departure,” on which the leader duels with the similarly fire-breathing tenor saxophonist Rob Middleton and trumpeter Bill Mobley.

Another McGuinness original, the breathtaking “Old Roads,” looks wistfully back at the composer’s childhood neighbourhood in West Hartford, Connecticut, with heart wrenching piano courtesy Mike Holober. “Aftermath” is also profoundly personal, a multi-movement suite inspired by the death of a college friend that cycles through the stages of grief. On this recording, the piece becomes almost a concerto featuring the emotional soprano sax of Dave Pietro, a longtime member of the Maria Schneider Orchestra, the Toshiko Akiyoshi Jazz Orchestra, and Darcy James Argue‘s Secret Society.

Originally commissioned by the Westchester Jazz Orchestra, McGuinness’ take on Nat Adderley’s “Jive Samba” is athletically funky, an infectiously joyous romp featuring spirited solos by trombonist Matt Haviland and baritone saxophonist Dave Reikenberg. Finally, “One For the Maestro” reaches deep into the Count Basie bag to pay homage to McGuinness’ high school band director, the late Bill Stanley. The most traditional piece on the album, the song deliberately evokes Sammy Nestico’s classic arrangements for Basie’s New Testament band. “Bill Stanley changed my life,” McGuinness says. “They should build him a statue. He turned me on to the tradition of cats like Basie and Thad Jones – the best writing, the best bands – and that changed my trajectory in life dramatically.”

That trajectory has now brought McGuinness to Along For the Ride, a journey along which he very rarely rode shotgun. It’s only felt this easy since he so astutely assembled one of the best bands in modern jazz.

“The beauty and excitement of the big band is that you have the potential for power and colour and nuance that you don’t quite get from small group jazz,” he says. “I write for a wide array of people: the seasoned modern jazz listener, someone who enjoys music of the swing era, and everyone in between.”

Originally from West Hartford, Connecticut, Pete McGuinness has been an active New York City-based jazz musician since 1987. His creativity is expressed in many capacities: in-demand jazz trombonist, GRAMMY-nominated composer/arranger, award-winning jazz vocalist, and longtime jazz educator. His credits as a trombonist over the years are many, including performances with such artists as Maria Schneider, Lionel Hampton, Jimmy Heath, The Woody Herman Orchestra, Mike Holober’s Gotham Jazz Orchestra, and Bill Mobley’s Smoke Big Band. McGuinness appears as a sideman on over 50 jazz CDs, including the GRAMMY-winning CD by Maria Schneider, Concert In The Garden. He has also performed in the pits of many Broadway shows throughout the years. As a composer-arranger, he writes for his own big band, The Pete McGuinness Jazz Orchestra, which has been nominated for three GRAMMY Awards. McGuinness is currently an Associate Professor of Jazz Studies/Arranging at William Paterson University.