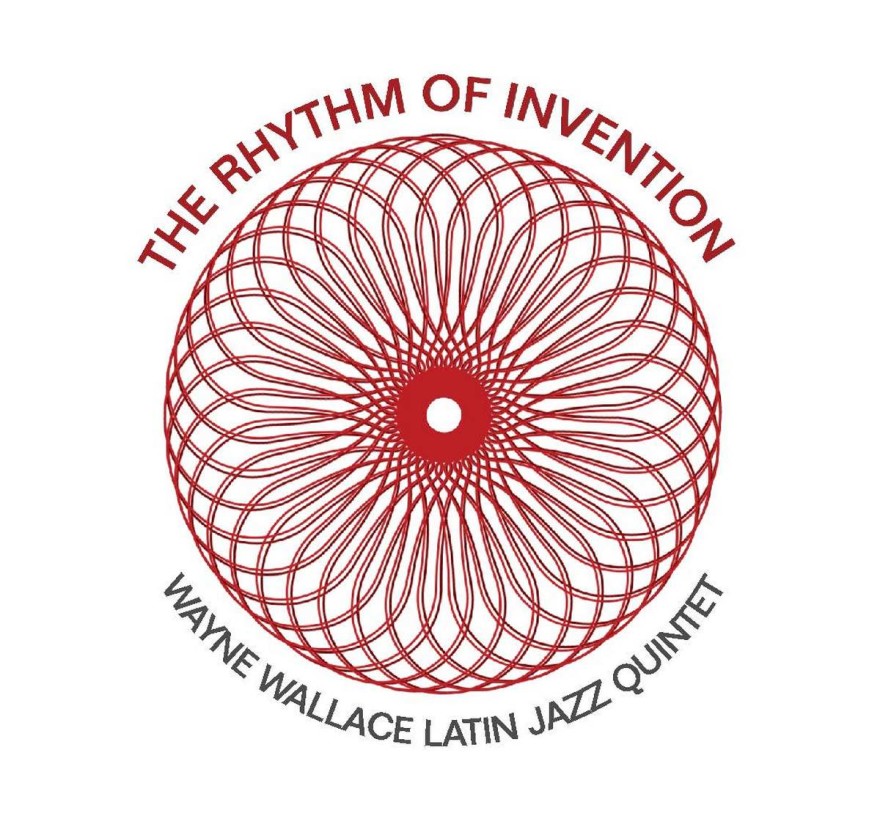 On his previous album, the critically adored Canto América, Wayne Wallace broke with his own tradition to co-lead a chamber orchestra featuring horns, winds, a double string quartet, and an array of vocalists. On The Rhythm of Invention – slated for release by Patois Records on June 7, 2019 – Wallace set an equally ambitious goal: to combine these added resources with his Latin Jazz Quintet, whose albums have garnered three of Wallace’s four previous GRAMMY nominations.

“I wanted to come up with a way of coherently mixing the quintet with the brass and strings from Canto,” explains the esteemed trombonist, innovative arranger, and notable educator. That desire now finds voice in a dazzling set of new compositions and classic jazz standards (and even one impressive mashup) on which Wallace uses the expanded sonic palette of an orchestra to highlight the strengths of his core conjunto. Undergirding it all is an effortlessly instructive survey of Latin rhythms, from the familiar to the arcane, that reflect Wallace’s lifelong study of these sounds.

“I wanted to retain the energy of Canto without repeating it,” he explains. To do so, he chose to redirect the music’s focus onto the quintet, while retaining the almost tangible richness of brass chorales and the elegance of string ensemble writing; peppering the proceedings are solos from such luminaries as Mary Fettig (flute) and Melecio Magdaluyo (baritone saxophone). Wallace also features rapper and spoken-word artist Akida Thomas on the title track, where he contributes a spontaneously composed ode to this music – and to the spirit of all music – that also utilises an interview with Wallace’s colleague and mentor, the late Dr. David Baker.

To tie all this together, Wallace came up with a three-layered approach, built upon the foundational expertise of his long-time musical co-conspirator, percussion master Michael Spiro. “The concept was to have Michael play four congas” – the usual conga setup has three at most – “and to have him play as melodically as possible.” As a result, “A good way to hear the record is to listen all the way through and focus on Michael, and then to drummer Colin Douglas’s cymbal work – and then put it together. It’s like a history of Latin music.” From there, Wallace created a second layer by highlighting the other members of the Latin Jazz Quintet’s rhythm section, pianist Murray Low and bassist David Belove, and leaving space for his own forceful yet lyrical trombone solos. Only then did he add the composed material; the vital frosting to this multi-tiered concoction, it draws its flavours from the previous ingredients.

As its title suggests, the album doesn’t lack for inventiveness. One case in point is Wallace’s arrangement of the durable Paul Desmond composition “Take Five,” which famously contains five beats in each measure (instead of the usual four). After some research, Wallace realised that no one had previously recorded this song with a clave rhythm, the heartbeat of Latin music – despite the fact that the clave itself comprises five notes (within four beats). The finished product marries these two views of musical time; add in a Santeria-derived coro section sung by the quintet, and you have a memorable new take on a 60-year-old jazz hit.

Another example comes on “So Softly,” in which the ancient pop standard “Softly as in a Morning Sunrise” – from the 1928 operetta The New Moon – slides seamlessly into Miles Davis’s “So What,” written three decades later. The idea to combine them arose from one of the Latin Jazz Quintet’s earliest experiments, in which the band presented these two songs as a medley; but, says Wallace, “After time I pleasantly found that the two melodies worked conversationally without detracting from each other. This inspired the idea of re-imagining them as a mashup” – an idea that, he points out, “stretches back to the beginnings of recorded music.”

Less complex (but no less inventive) are several homages, including Wallace’s slightly shrouded cover of “Vamanos Pa’l Monte” one of Eddie Palmieri’s biggest hits. Although this version mimics the blend of trombone and flute that characterized Palmieri’s famous band La Perfecta, “The melody is really an extrapolation of what Eddie wrote,” says Wallace. (But anyone who knows the original will recognise it as the framework of this arrangement.) Meanwhile, the completely unexpected inclusion of “In a Mist” – an impressionistic piano composition by the legendary early-jazz cornetist Bix Beiderbecke – represents a sort of personal triumph for Wallace. “It took me eight years to figure out how to arrange it, because it’s just so idiosyncratic and challenging,” he admits. “The original piece was a kind of collision between ragtime and danzon rhythm; I tried to combine the danzon with clave to get a Cuban feel. And I thought that a string quartet was applicable because it would bring out the sonorities in a modern way” – not to mention hinting at the classical roots of Beiderbecke’s small masterpiece.

The album highlight is the title track, which brings together funk, bata, and traditional Cuban rhythms and encompasses three generations of musical wisdom. On one end is Dr. David Baker, “the father of jazz education,” with whom Wallace worked closely as a professor at Indiana University before Baker’s death in 2016, and whose resonant voice is heard, midway through the track, discussing the essence of jazz rhythm. On the other end is Wallace’s son-in-law, Akida Thomas, channeling the music to speak of The pulse gyrating through the system . . . Boom-clacks all rolled into one, stay connected through the soul of the drum. “There’s this crazy counterpoint between the strings and the horns,” Wallace says; “it’s some of the most texturally adventurous writing I’ve done. Akida just listened to the track and started writing.” The invention took on a rhythm of its own.

But The Rhythm of Invention refers to something altogether different from the riot of Afro-Latin beats and layered percussion that characterize the album. For Wallace, the rhythm of invention is the pace that allows him to be open to creativity: the tempo “that allows a space for the muse to be available to me,” as he puts it. It is the rhythm of a gentle river, slowed but not stilled: the “flow” that banishes mere busy-ness in favour of reflection and, yes, invention. “That’s when I get the best ideas,” he says; in fact, the “Take Five” arrangement “literally came to me when I was pulling weeds out of my garden.” When you slow the rhythm enough, you can better see the speed of thought.

In a career that spans four decades, San Francisco native Wayne Wallace has collaborated with artists ranging from Count Basie to Stevie Wonder, Sonny Rollins to Carlos Santana, Tito Puente to Lena Horne and Aretha Franklin, lending his talents as sideman, composer, arranger, and producer. His debut album as a leader, 2000’s Three In One (Spirit Nectar), showcased his writing skills and his encyclopaedic knowledge of Afro-Cuban rhythms, which he developed in the close-knit Bay Area jazz community – most notably in his role as music director of John Santos’s Machete Ensemble, where he spent 20 years as music director. Wallace’s outsized role in Bay Area jazz includes his creation of Patois Records, with a catalogue that includes not only his own albums but also recordings by vocalists Kat Parra and Alexa Weber Morales as well as two highly regarded anthologies of Bay-Area salsa and Latin jazz. A gifted educator, Wallace now spends the academic year as professor of jazz trombone and practice in jazz studies at the Jacobs School of Music at Indiana University, having previous taught at San Jose State University and Stanford University.