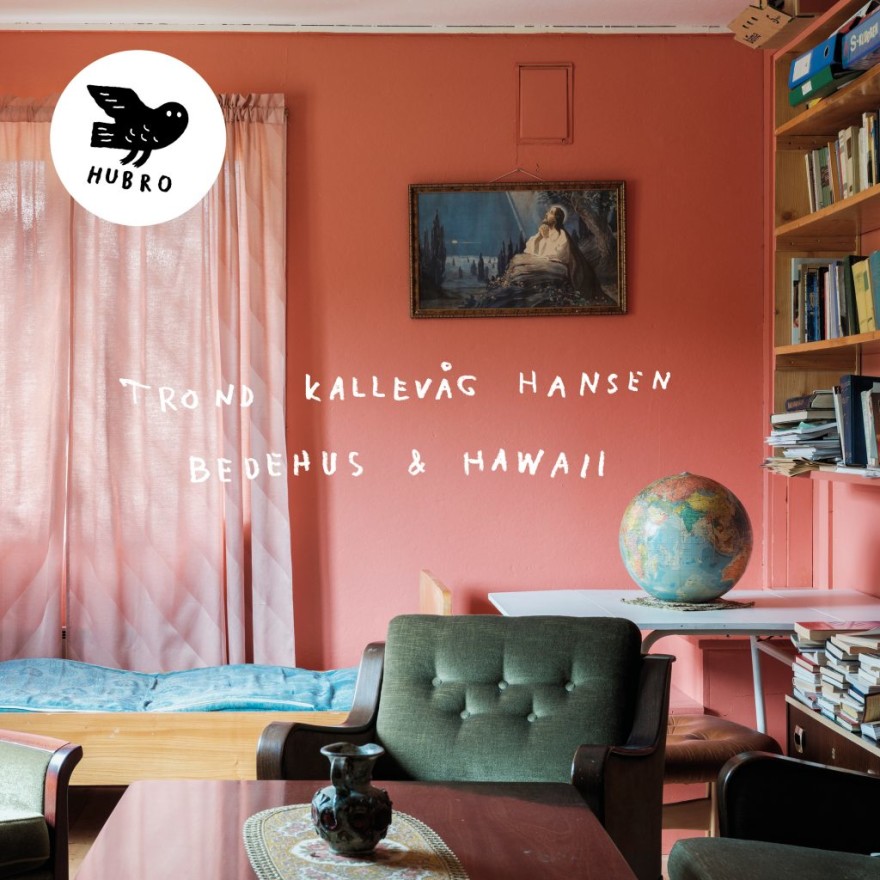 On the guitarist and composer Trond Kallevåg Hansen’s inspired and inspiring Hubro debut, edgily ambient and cinematic atmospherics meet front-porch picking from a super-sensitive folk and jazz inspired ensemble given serious twang by the legendary Geir Sundstøl on slide and pedal steel. Perfectly formed ear-worm melodies are stretched and bent into new improvised shapes as electric and acoustic instruments weave decorously in and out of each other’s orbits, accompanied by startling solo preludes or intersecting excerpts of experimental field recordings or found sound.

The spacious music wears its influences on its sleeve – there’s Ry Cooder in there, Ennio Morricone, too, and an echo of Geir Sundstøl’s own recent solo masterwork, ‘Brødlos’, whose recording venue of Studio Intim (Sundstøl’s home-studio in Oslo) ‘Bedehus & Hawaii’ shared – but there’s no straining for effect.

Everything seems to fall quite naturally into place, sounding intimately poised and at home with itself. Whatever the musical references, and however long you might take to enumerate the album’s various strengths, and those of Trond Kallevåg Hansen as writer, player and producer – and ‘Bedehus & Hawaii is so good that you can continue doing this for quite a while – you might still question exactly what makes it so special. For deep in the core of the album’s unusually compulsive appeal is a poetic sense of place and a very specific audio landscape. Here, as reflected in the title (a Bedehus is a local prayer-house or chapel), west Norway somehow meets the south Pacific, and humble chapel traditions – of music and much else – rub up against what might be termed Polynesian gospel-swing. There are so many contrasts and concordances here – between different geographical and musical climates, between north and south, sound and music, acoustic and electric, composition and improv, figure and ground, sacred and secular, sea and shore – that the music carries an ever-present sense of tension and release, pushing each tune forward as if it’s dancing on the balls of its feet.

A particular blend of instruments and instrumentalists is partly what makes ‘Bedehus and Hawaii’ so distinctive, with Trond Kallevåg Hansen choosing to use his familiar trio partners, Alexander Hoholm on double bass, and Ivar Myhrset Asheim on drums and percussion, alongside the virtuoso violinist Adrian Løseth Waade (Skadedyr). Adding Geir Sundstøl supplied the magic touch. “Pedal steel guitar is probably the most beautiful sounding instrument I know, and to have Norway’s most respected and in-demand guitarist playing on my album was surreal and amazing.”

The remaining ingredient, and perhaps the reason why the album goes so far beyond the normal confines of a superior ‘picking’ set of instrumentals – whether jazz, country, or whatever – is Trond Kallevag Hansen’s interest in film soundtracks, and his use of sound as sound, which adds a further level of intellectual engagement to the project. “I wanted the musicians to express themselves without feeling limited by the music, but I also wanted to tell stories and have a cinematic quality”, he says. “That’s also why I’ve been mixing electronics and a little field recording into the music, in order to bring certain moods and pictures to the mind of the listener, but without overdoing it.”