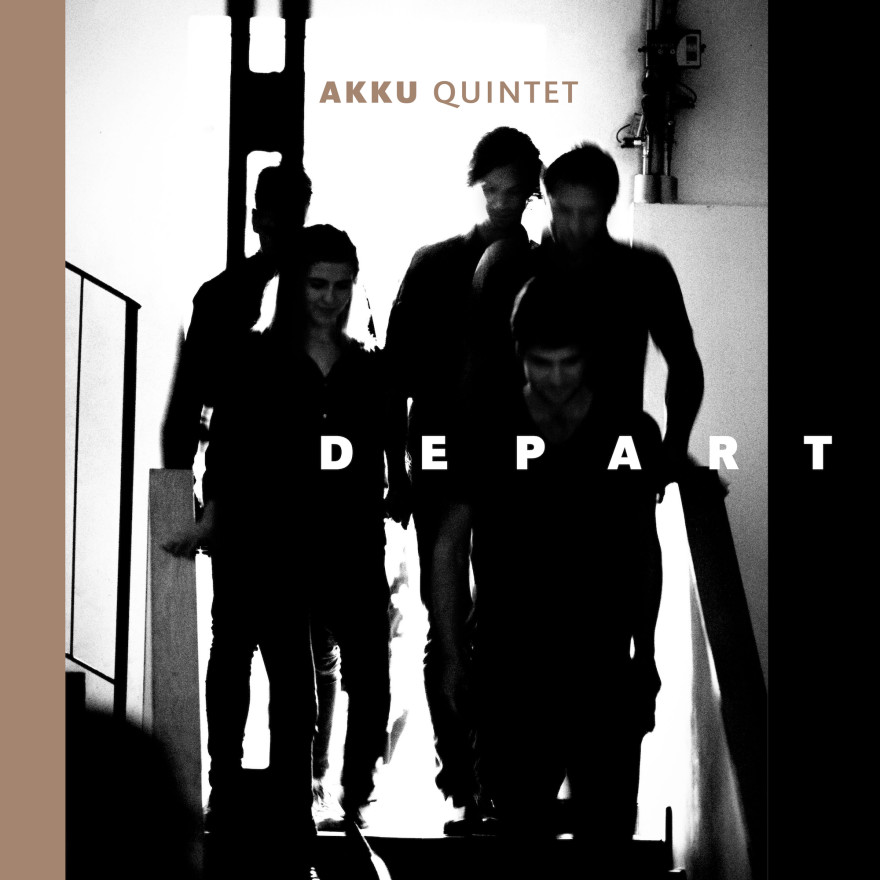 The Akku Quintet was founded by drummer and composer Manuel Pasquinelli. Says renown writer Sid Smith, “Best-known for his work in Swiss post-rock minimalist outfit, SONAR, Pasquinelli’s writing contains an almost cinematic dimension that encompasses bittersweet moods and moments of unfolding drama.” The band is based in Switzerland, from where they dispense a minimalistic jazz groove to great effect.

Since their first concerts in 2011 the band gained more and more international attention (North-America tour in autumn 2018). Their debut album “Stages of Sleep” was released in May 2013 (Morpheus Records). The quintet then set the different phases of sleep to music. Following their acclaimed 2015 album “Molecules” Akku Quintet released their third record “Aeon” in 2017. In October 2018 the band toured Canada and USA.

Their fourth album “Depart” is the first to released on Trey Gunn‘s (King Crimson, Security Project) 7d Media label on May 17th.

Says Manuel, “We have chosen ‘Depart’ as the album title because it describes very good the general feeling/spirit of the album. I’d say compared to our previous albums, ‘Depart’ is more forward-moving and expressive. I think one can hear a forward-moving undertone on all the tracks. The title track ‘Depart’ comes along in a courageous and at the same time doubting and mysterious mood, performed with lots of playfulness. ‘Depart’ was the best word to describe the mood of this track and the album in general.”

Akku Quintet’s new album still has a minimalistic touch, but you’ll hear more of the soloistic qualities of the group members. It’s a colourful, powerful album of a well-attuned band. Recorded live in the Studio April 16-19, 2018, the compositions were written by Manuel Pasquinelli

Says Manuel, “We recorded the album within 4 days. All the songs were performed ‘live in the studio’, playing all together as a band. We rehearsed/developed the music in a short but intense rehearsal phase and some live performances.”

“The group connect and lock together yet remain constantly in motion, maintaining a balletic poise and grace that skilfully builds and adds line upon line of long, sonorous notes. Though each one on its own might be gossamer-thin, when combined, they create something strong and enduring, something substantial and memorable.” – Sid Smith

Manuel Pasquinelli is also known as the drummer of the band SONAR which is currently collaborating with David Torn and Bill Laswell. Andi Schnellmann is regularly touring with Schnellertollermeier (Cuneiform Records). In support of the new release the Akku Quintet will have some album-release gigs in Europe in May and will be touring in Europe and Russia in autumn. The band also hope to play North America again soon.

In closing Manuel has this to impart, “My goal is to impart a specific mood to the listener. not a concrete story, but a mood and a progression with changing conditions/colors to dive in as a listener. And I hope one can listen to a tune on the album several times and discover always new things in the song and look at it/listen to it with a different focus/perspective.”