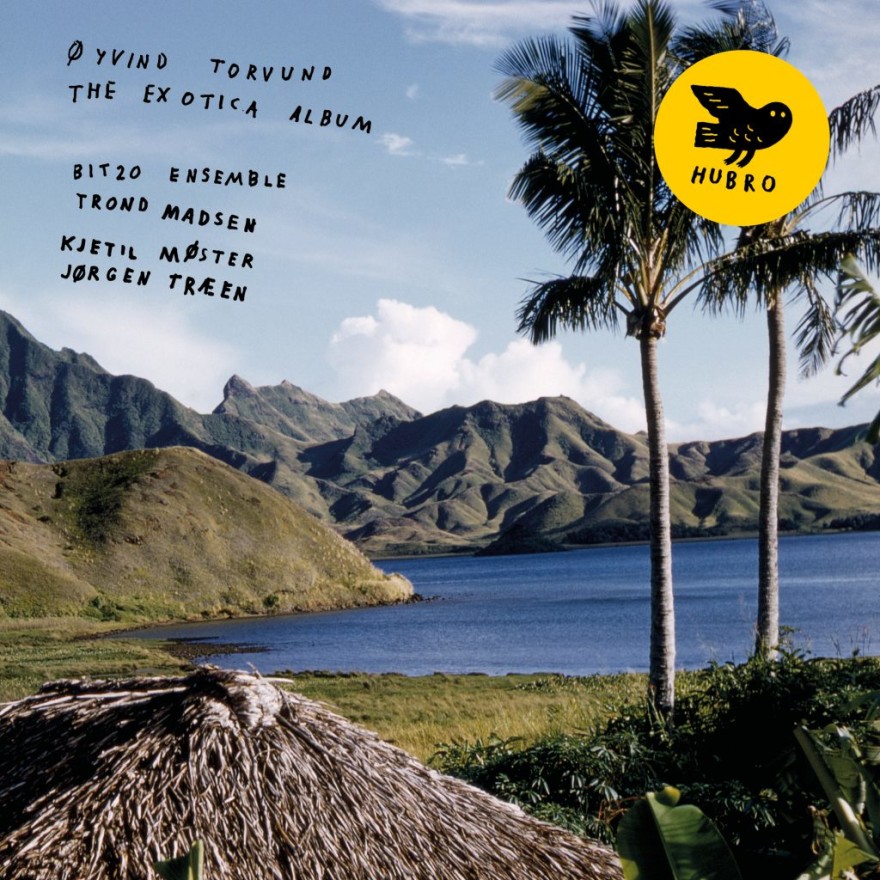 Øyvind Torvund’s super-maximal adventures in far-out Exotica: think John Zorn hanging with Stockhausen in Martin Denny’s kon-tiki lounge. But it is not just a simple trip to the cartoon – land. Far from that actually and it contains more exotic notes than anyone would expect from the land of fjords.A chorus of Disney-fied whistling leads into the synthesised sounds of jungle animals, as impossibly lush, sensual strings transport us to the South Seas setting of some corny Hollywood movie or coconut-flavoured TV ad. What might be chirping bird-calls (sounding suspiciously like short-wave radio signals), and an insistent peck on the piano give way to demented percussion, spiritual-sax and an Alpine brass fanfare that’s drowned out by electrical storms of yowling distortion. There’s electronic raindrops, a duet for bongo drums and ring-modulator, plus various versions of nature music in the expansive, widescreen mode where Sibelius meets John Williams. Add weird electronic wig-outs mixed with kon-tiki lounge and it’s suddenly like John Zorn hanging with Karl-Heinz Stockhausen round at Martin Denny’s place. Welcome to ‘The Exotica Album’ by Øyvind Torvund. This is maximal music, where a gallon’s worth of content is squeezed into a pint-pot of recording time, and it’s great.

Commissioned by the Bit20 Ensemble and premiered at Oslo’s Only Connect festival in May 2017, ‘The Exotica Album’ features the Ensemble conducted by Trond Madsen plus star guests Kjetil Moster on sax and Jorgen Traeen on electronics. Although it’s difficult for any summary to do such mercurial music justice, composer Torvund’s audaciously playful suite re-imagines in collage form the chunky edifice of those Fifties and Sixties popular styles categorised variously as ‘exotica’ or ‘lounge’ (and re-popularised in the late Nineties and early Noughties as part of the craze for retro-modernism), together with a wealth of historical reference points, from early electronic composition to cartoon music. But rather than the flip pastiche or cracking-a-nut-with-a sledgehammer cynicism that often characterises high culture or avant-garde encounters with popular forms, Torvund’s attitude to his sources appears genuinely knowledgeable and affectionate. There’s critique, but it is coming at least partly from the inside, Torvund is even emerging from the experience smiling, as it were, because his vividly imaginative music manages to retain some of the innocence and delight associated with the originals. There’s also a knowing nod to that era’s more optimistic attempts to reach out, however clumsily, to the frontiers of other cultures (other galaxies, even), and to the experimental and ‘out-there’, just as Sun Ra’s interplanetary aesthetic was inspired at least partly by Les Baxter’s ersatz moon safaris. The very contemporary re-evaluation of one era from the perspective of another is echoed in Rob Young’s witty liner-note text, where a once bright exploratory vessel, The Rainforest Morning, ends up – in a parable that recalls J.G. Ballard – as a useless, rusting hulk.

“The piece grew out of a wish to do something on the exotica genre and link it to early electronic modernism”, Øyvind Torvund says. “I felt a connection to both the world of exotica, to Les Baxter, Martin Denny, etc, and also to early electronic music, to Stockhausen and G.M. Koenig, who made these sonic diamonds where there is so much love in each naive little ‘pling’. I had an idea to combine the two worlds using the idea that they were both wanting to explore and deal with the unknown. I also had this mental image of one of the pieces being like going up a river in a canoe and suddenly discovering these abstract installations or sculpture in the jungle. So I started writing tunes that were clearly inspired by the sounds and colours of Fifties exotica, and then added abstract compositions and improvisations that ran parallel to the tunes and sometimes interacted with them. Jorgen Traeen and Kjetil Moster then began to represent the more modernist/abstract part of the material, with synths imitating waves, rain, birds and other natural phenomena. The tunes are inspired by composers like Esquivel, Martin Denny and Les Baxter, and also the collage work of John Zorn, Otomo Yoshihide and Christian Marclay.”

The result, rather than being a dry, academic-sounding rehash of pre-existing sources, provides a continuously diverting listening experience where the rate of change never lets up. And Øyvind Torvund, despite the wealth of references and inspirations, convincingly develops his own musical language, just as The Exotica Album’ attains its own structural integrity by successfully creating a distinctive over-arching form to support the myriad of constantly evolving musical parts. Remaining true to the spirit of its sources, whether low exotica or high electronic modernism, ‘The Exotica Album’ also sounds impressively new, honouring the great tradition of sonic experimentalism by boldly going as far out as it can.

All music composed by Øyvind Torvund.