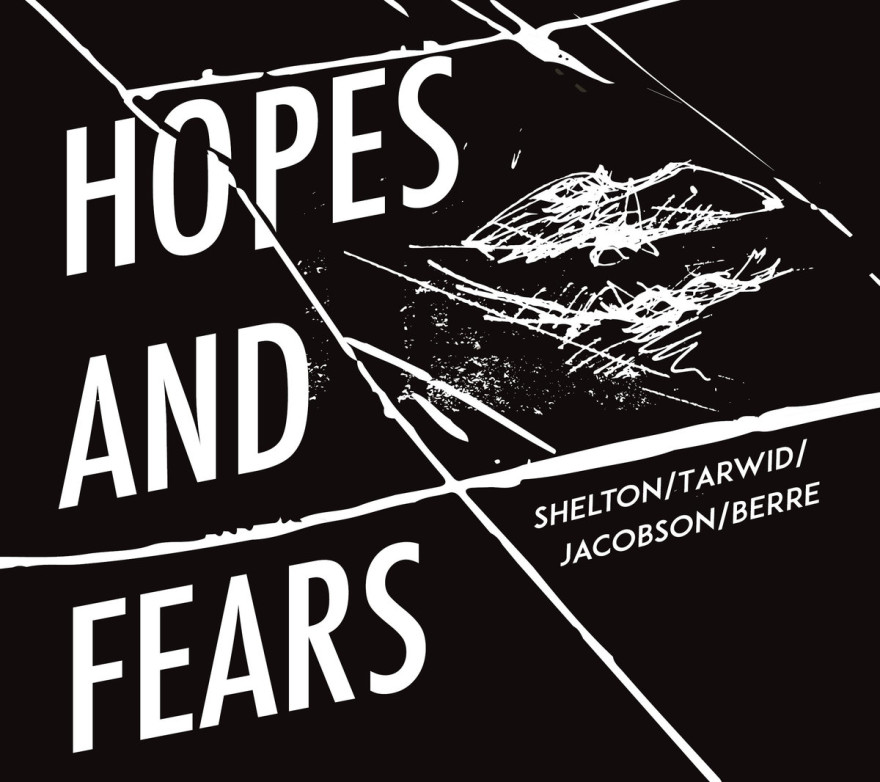 Multi Kulti is a small label well known for their niche market recordings in Poland and well worth following for all fans of improvised music in general. The latest Hope and Fears session made by this international quartet belongs to that canon exactly. When Shelton is well recognised already post Dolphy tradition continua-tor, remaining three gents can still be called youngsters, with pianist G.Tarwid to be the youngest, but already widely recognised talent by many musicians he had been collaborating with.

Three pieces on this recording are improvised and co- composed by whole quartet. It is an open formula with lot of space left for communication and each artist clearly contributes to this shared space.

In an opening tittle piece, it is Tarwid who supplies the canvas for all that happening, with just a view rightly picked up chops, with bassist following closely and framing this little flock of notes with wonderful long Arcos. This interaction creates the thickness of the texture additionally weaved with Berre’s sparkling and highly energetic drumming. On that surface the sax lines are just laced in like a thread into the weave. Piece has this momentum which is approached carefully and the tension floats from very dance and congested to almost breaking silence with a great intuition and feeling of the dynamic of the act. After rapid start with the great intensity the piece fades into lovely Noir flavour served by Shelton’s sax. From the culmination point things slows and getting handled in more vailed way, all build sensitively around his lines which are clearly taking the lead at that point to get back to equal rights and mutual respect for each other’s voice as they face towards the end.

Daydreams and Terrors, coming after brings an immediate tension that title suggests. It is show off for the drummer in first place as it is him who leads the act now. Piano comes very percussive and counterpointing either. Amount of textures they create is mesmerising and I truly love that piece most of all. Shelton lines are less brassy and sticking with the general flavour, plus hid vibratos on that occasion are to die for. It is also him and his amazingly puffy outro that takes us back to safety.

Closing Ambitions and Doubts carries with more open character. Shelton reed is sounding here very much like Arthur Blythe’s one to me. Phrasing and changing tempos in particular.

But it is only comparison to fit the purpose as he has got his own distinctive voice. This is also a part when each musician has more room given for his own solo voce. The culmination to me is a conversation between the sax, sounding almost like cymbals played Arco and Double Bass, coming in response with fast aliquots, shortly joined by drummer and pianists’ percussion approach.

The amount of fresh ideas out of the water is fascinating to ”watch”. I said watch due to the strong visualisation coming out of the spectacle, which even if being quite dance and demanding for the listeners remains all the time highly entertaining and never becomes boring. Also, the spectrum of intonations with their entire richness and full scale holds on the great balance between the soft and edgy and never triggering a trace of the fatigue.

In one word it is a Marvel