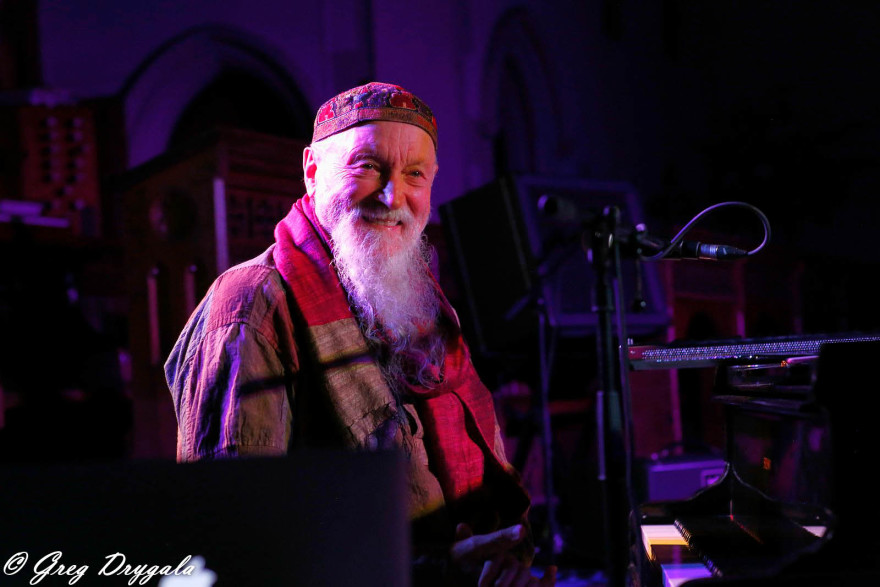 Second Act of the ongoing Brighton Alternative Jazz Festival 2018 are two evenings reserved exclusively for Terry Riley and Gyan Riley, taking place at St. Luke’s Church, a lovely venue with a promising acoustics. I attended first of the two gigs on evening the 7th of October. Both shows had been sold out in just few days in an April, when 1st time advertised. Let’s jump to the substance then.

It was straight forward very interesting to me not only to see and listen to Terry’s performance, whose music I am following most of my life and never had a pleasure to hear it live or see on stage, but also to experience a father and son conversation in music. I read about them touring often together but it all was taking place behind the ocean, sadly. Until last year when they appeared for the European Tour. I believe that an excellent review following that series of events brought us to the point that we have that tour covering UK in this year. Additionally, the success of the ongoing tour and such a massive demand for tickets opened a gate for more and the next year tour for a Duo in April had been already announced and tickets are on sale now. 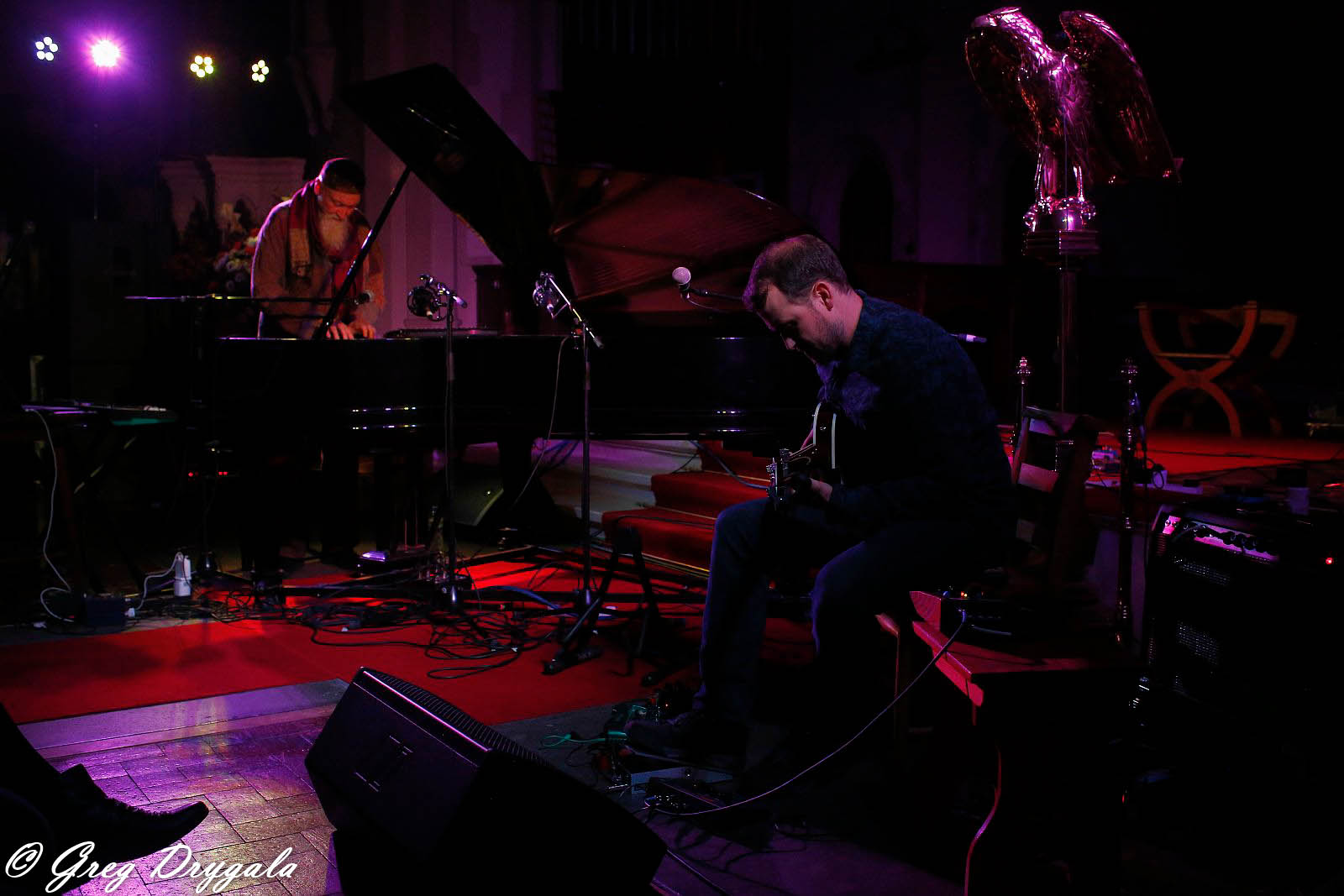 I only knew Gyan’s music from two projects, and none of them included his father. 1st is his solo album Stream of Gratitude which he released in 2013 on John Zorn’s Tzadik Records. 2nd is a collaboration with Czech violinist Iva Bittová and his compatriot Evan Ziporyn, flexible multi-instrumentalist and composer, titled Nayive –  Eviyan which had been recorded and issued by an Animal Records label. So, I was all ears as none of them was really giving me any clue what to expect from that connection, except the fact that Gyan himself is fully shaped and mighty musician. 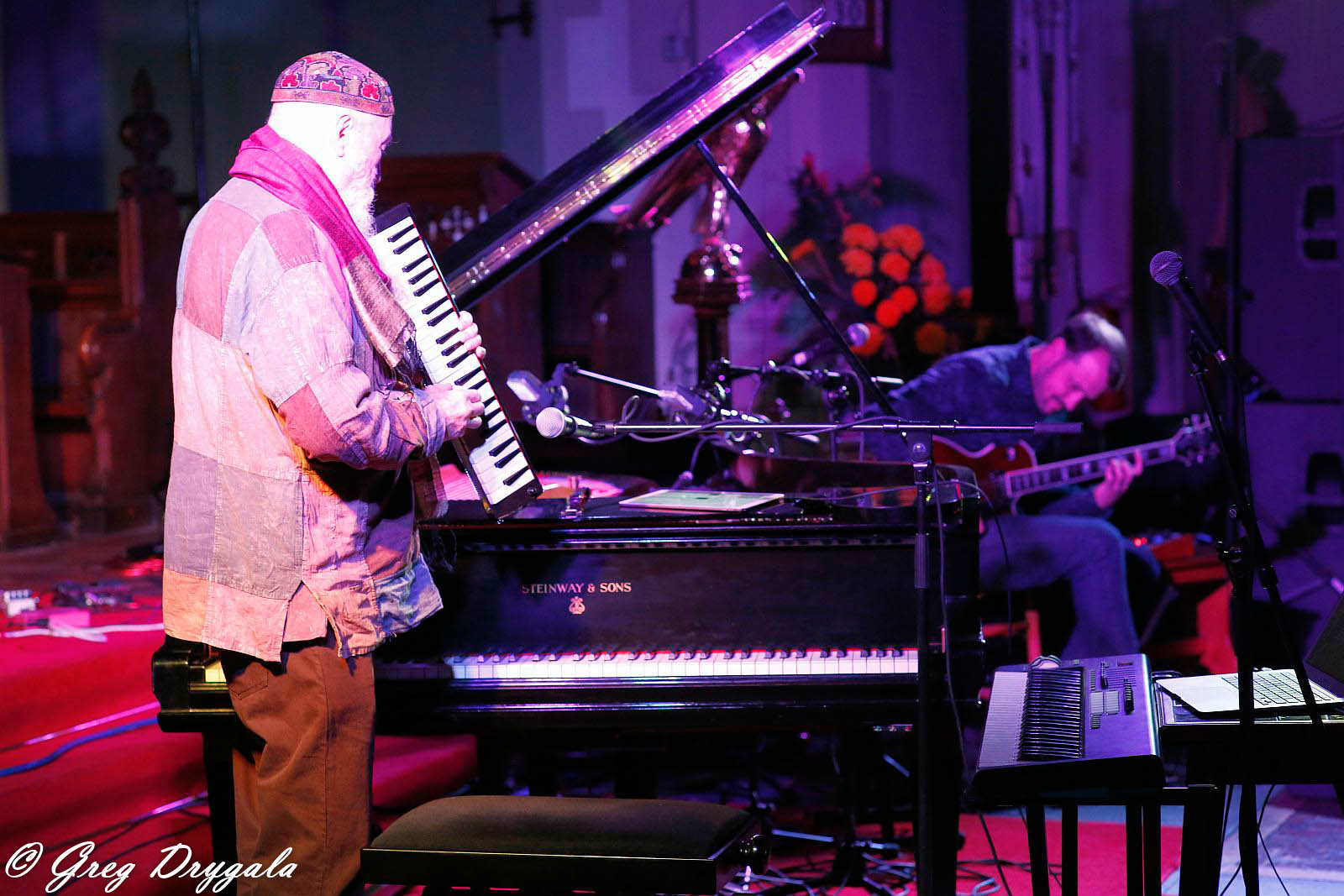 This concert came as two parts with a little break between them. The first one from the beginning was little surprising, as it was clearly repertoire made of Indian Ragas alike and similar Oriental spiced compositions. In the same time, it was no surprise at all, as mixing minimal concepts with some oriental scales is long time the part of Riley’s style. Indian influences are also vastly present in his scores for movie soundtrack or works for television broadcast, which he composed lots. Here he was most of the time singing self-accompanying himself from the piano. That part can be seen as a tribute to his most influential teacher – Pandit Pran Nath, whom who mentioned between the tracks and obviously visited many times during his countless visits to India. I enjoyed that part a lot due to its meditative nature and the fact the set took place in the church added to the spiritual feeling due to phenomenal reverb that building’s nave was supplying. It was however a music played Duo most of the time and that was fantastic to say at least.

First of all, it was a fascinating dialogue of two soul mates. The fact it was happening between the father and the son had probably less meaning that I originally thought it would. Gyan obviously adopted a lot from Terry’s techniques into his work, which is obvious consequence of being a musician and the son of such a father in the same time. On the other hand, everyone who would study Terry’s music could do the same. Therefore, if there was some spiritual connection coming from genetics during that act yours truly could not spot it going on. Saying that let’s go to the music. 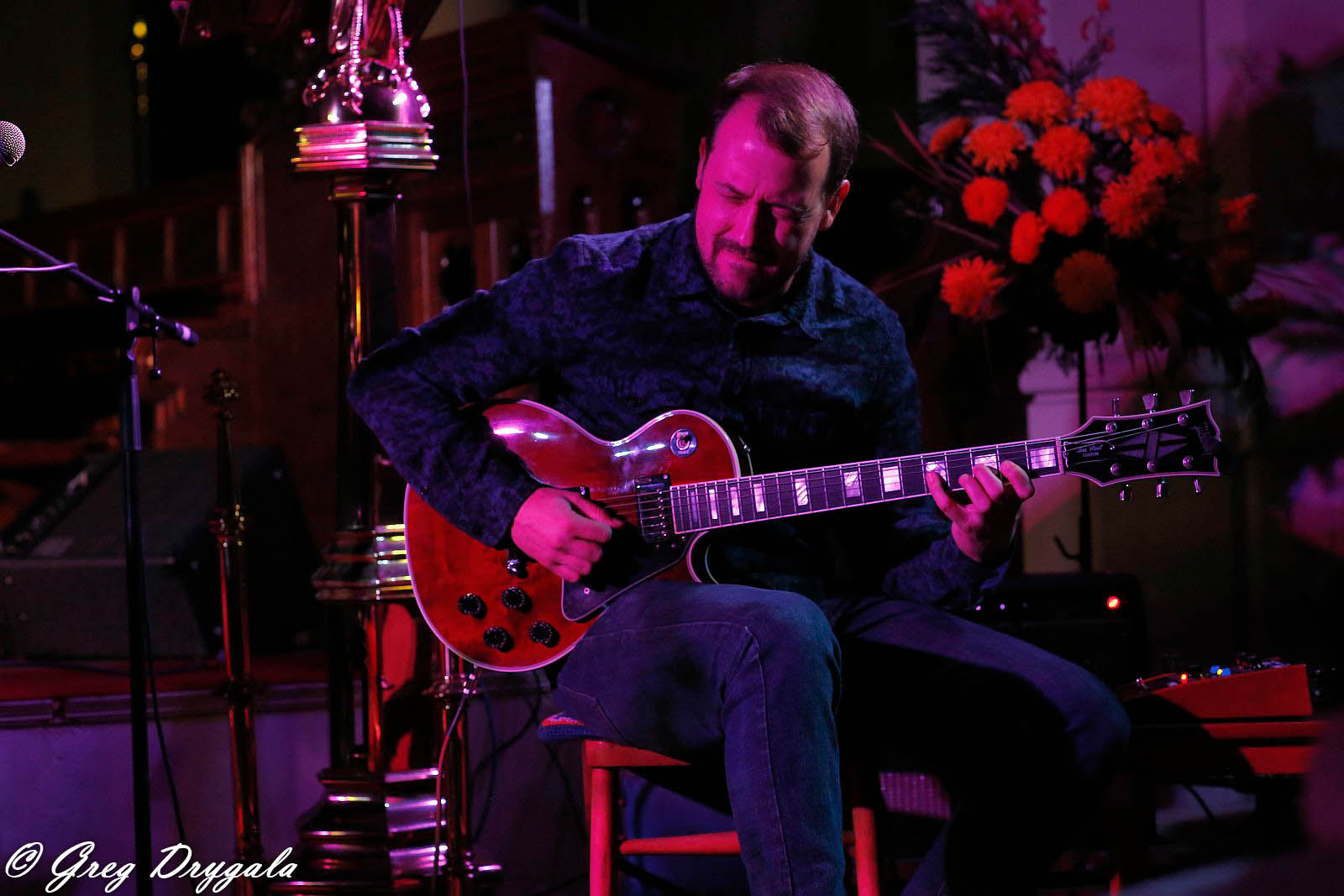 Terry’s approach to Raga as well as playing the Piano or Melodica was typical of his style, which I admire and bought to the table together eastern melancholy and western drift towards melody, which in his case was carrying a lot of nostalgia in it. The real joy was listening Gyan’s involvement in this. His counterpoint to the compositions was not just a usual way of playing Ragas on the guitar, like one may remember coming from great masters like Pandit Debashish Bhattacharya. Also, it is not a fusion alike Prasanna created in his Carnatic music influenced compositions. Or even more up to date Rez Abassi approach, to mention Rudresh Mahanthappa’s frequent collaborator and show some paths for those who would like to follow and make more enjoyable research.

It is something very his and I never heard anything quite like that before, as far as I can recon.  His personal style is based on western music, contains a deep study of the micro-tonal structures as well as guitar music in general, classical, blues and jazz. It comes with lots of influences recalling folk, especially this from Nordic nations, but also a razor-sharp post progressive – rock influence. If you add to that an instant ability to improvise, with whatever wish, scales, genres or styles and ability to listen you are getting a top-notch performer. On top, what he definitely got after his father is his constant musicality. I mean by that a creative ability of instant switching between the melody and the chords progressions in demand of stay in a dialogue and keep it entertaining. 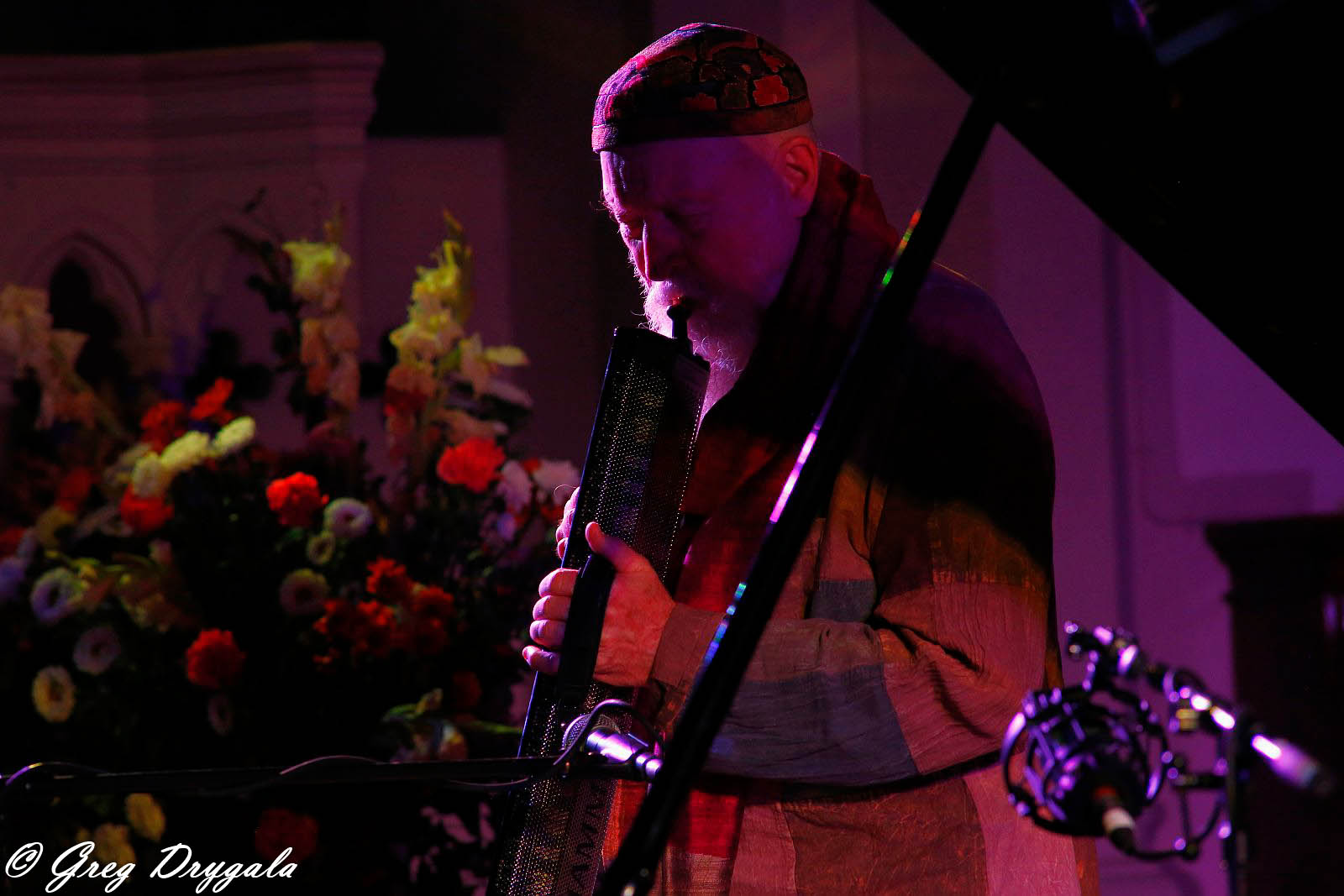 This tremendous skill became even more audible when the second part of the set started after short break and it was a complete shift of gears as well. From that point on the music moved toward micro – music conversation, which was partially scored and partially improvised if I can trust my senses on that. That part of the performance was immediately much more engaging to the listener as well, who now could leave a cocoon made of pure silk and gentleness and look at the rainbow, where all colours started to merge at front of his eyes So many things started to happen with all the richness of textures and innovative use of guitar and electronics connected to it. The Blues was present everywhere, giving the proper meaning to what we do call an American Music today.  The dialogue gained a lot on intensity because of that and one could say that we are listening to two great voice of the equal quality.

Hugely enjoyable concert in every single aspect to me and I am already looking forward to return to the next year’s April set. Tickets, already booked. Now it is just a patience to wait for – the most difficult bit, but luckily there are some recordings on the shelf to help to make it easier.