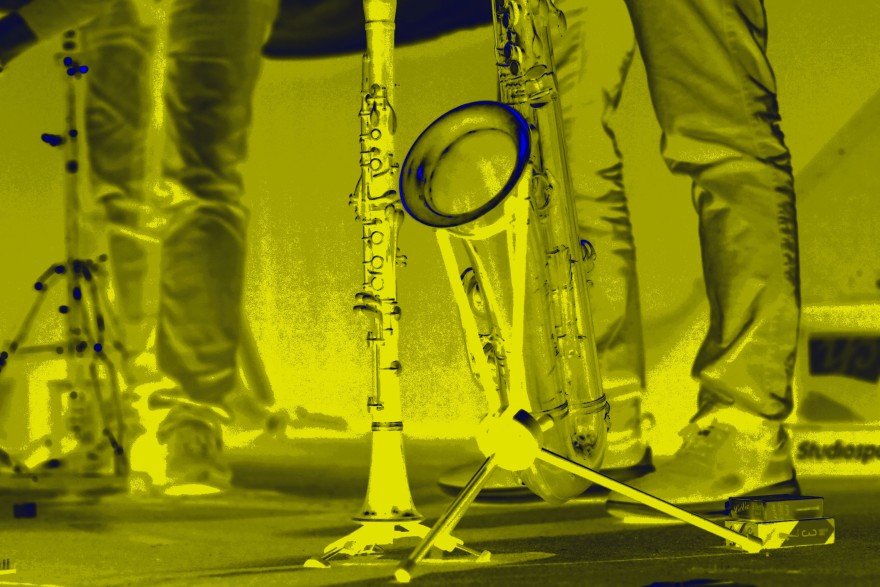 Vandermark and Nilssen – Love have both long way behind together, as well as they do separately.  I am following both musicians for over two decades now and I am constantly knocked out by their creativity and vitality, not even mention master class craftsmanship they both do represent. As it always is a case with top quality improvised music it is not a most fashionable one, therefore not easy to find neither on the shop’s shelves or the streaming services, to even to get wind of. Neither they are easy to be heard live in the Great Britain, unless you are visiting some European festivals and gigs or lucky enough to be close to Café OTO, London. That is very good then for Us here down South that people behind the Dictionary Pudding managed to get them here for that one set.

Both KV and PNL, not being that old yet, are well seasoned veterans on a FREE and Improvised music scene. Multiple projects and bands they co- created, led, being a part of, composed the music for, … you name it – are all around my all-time favourites. If you familiar with DKV, Steelwood, NRG Ensemble, Vandermarks 5 or The Thing, Crimetime Orchestra, Large Unit then you know what I do mean. If you do not, you better catch up and have your lessons done as you might lose one of the biggest thing happening in music right now. There is not enough space here to discuss it in a more focused way I am afraid as both Gents are carrying well above couple of hundred recordings in their respective discographies and despite my hardest tries I might even know or heard a half of it. But what I did hear and seen during all those years and concerts I had a privilege to attempt is enough to be 100% confident that today’s Avantgarde music is flirting with both Big Time.

KV and PNL crossed their instruments in many battles but their Duo ongoing thing started some 14 years back with a Double Pleasure dual bill as far as I am aware, then after 5 years break they got back to this formula and made another two, Milwaukee Tapes and Chicago Volume. Later, again on Letter to A Stranger on SMJZ label – one of my favourite ever and the last I am aware of, recorded three years back The Lions Have Eaten One Of The Guards. As I said above I might have heard about two hundred recordings with both on and own more than hundred for sure but still I can feel that my knowledge about is limited. But it is no surprise because they are like Supernovas. Evolution that takes place on that plot is just too overwhelming to keep up to date, unless you are the part of that. The fact is that they do not DO that for the money or life, this is the way they do LIVE.

The program they played, according to my memory gets back in time to the Letter.. session. I mean the pace that they created on stage responds most towards this direction, but the intensity in building the tension and culminations in this conversation possesses a huge aspect of what they did explore on the last session too. Those are long semi improvised structures played with an incredible intensity. The framework Paal builds varies from tribal alike trans building drumming with lots of space between the notes to incredibly congested rides, where both musicians are building climax with an unmatched sensitivity.

On the other hand, we have dialogues incredibly sensual and intimate. Nothing there is about tempo. It is incredibly spiritual meeting with a movement made on the matter of moment, on listening to each other’s voice and of course the fact that they know each other’s feeling so well.

That shift of tensions and realises in such a small-time capsule are reminding me what great Fred Anderson and Robert Barry used to do together.  Or Hamid Drake with William Parker, even though there was no brass involved in it. At that point of Soul-talk the instrument doesn’t matter but vocabulary and the richness of your feeling. Never mind the speech abilities.

This set was nothing but the Trans, with a feeling of being completely immerse into the created sonic tissue. Regardless the fact what drives you? Melody or Rhythm, no one could stay on his feet without being flushed with a flooding of feelings and mirrored images fulfilling everyone’s imagination. The more you can feel the deeper you got. With some odd figures more breathed out than played on the permanent flow Ken supplied speeding up and slowing down your heart’s beats, fiddling your brain with colours they made us drift in an air like some clouds of fog. You know that feeling when you a photographer and you finding yourself pissed off that you must move your camera and open your eyes to take some snaps for an illustration purpose. Cursed times we are living in where words alone are not enough. Never mind I did it. I learn over all those years how to stay in and get one leg out if needed. But believe me it is strange feeling of being forced and taken out of the warm milky tit. Traumatic experience.

Now, as I wrote that in purpose once I woke up today, those of you who are lucky enough to make it in London, during café OTO gig. Go for it! What you are going to experience is an Olympus of music collaboration. An Art doesn’t go higher than that. Priceless memory.

ps: pictures to follow soon when I have some time to look after it