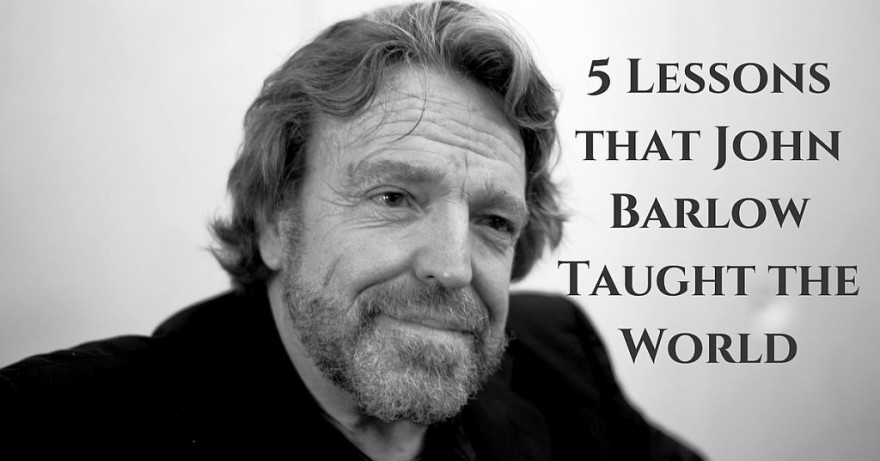 1. Freedom of Speech is important

Barlow believed that the world should be a place that “all may enter without privilege or prejudice accorded by race, economic power, military force, or station of birth… a world where anyone, anywhere may express his or her beliefs, no matter how singular, without fear of being coerced into silence or conformity.”

This is probably due to Barlow’s humble lifestyle on a cattle ranch. Here the idea of being free and having a wide-open space for oneself developed.

Barlow was an advocate for net neutrality and believed that the internet was where people could speak openly, having that wide open space as he did on the ranch. As he himself said, “there is a lot of room to define yourself. You can literally make yourself up.”

Barlow was not only passionate about self-development through the internet, but believed that putting one’s digital goods out there for the world to see and hear was the best marketing strategy.

As the lyricist for the Grateful Dead rock band, Barlow developed a marketing strategy in which he let people bootleg the Grateful Dead’s concerts so people became more familiar and would flock to the music they learned to love.

He believed that the secret to marketing was in the availability and familiarity of the product.

3. Live freely and without fear

He believed that people should have the opportunity to express themselves freely and that the internet was a great place for this purpose. It was because of this that he went to every measure to do so.

He believed that people needed to have secure communication methods. He therefore provided, as part of the EFF, security measures through tips, tools, how-tos, tutorials, and software for safer online communications.

5. Stand up for what you believe in

Barlow believed in an open internet, a free internet, and he held that belief until he died. He took a stand against the government and authorities for what he thought was right.

It is through Barlow’s strength and stance with the government that today we have the safety, security, and free music and movies to listen and watch. Today, as he can no longer do so, we must take the stance for ourselves and stand up for what we believe, just like he taught us to do. There must be someone from your friends or family who deserves to know what John did for our internet freedom.

Here is a LINK to the original write up.