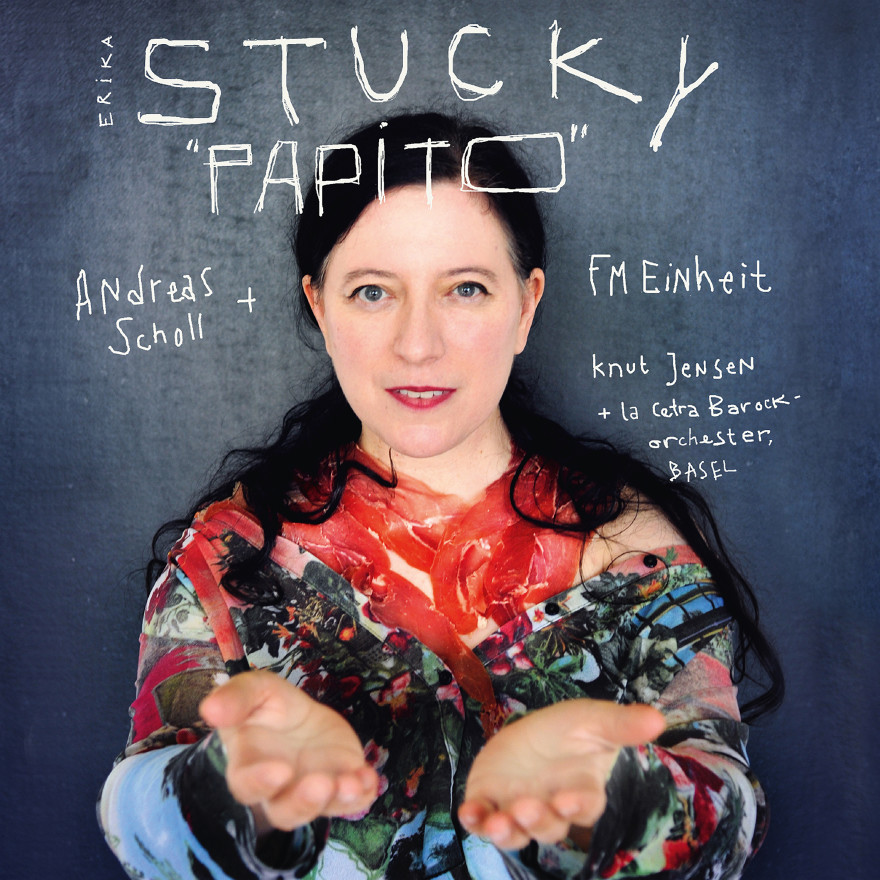 It is not my first meeting with Erika Stucky, crazy Swiss artist and stage performer with her origins rooting in the US, planet Earth and imagination from Mars. Therefore, I was kind of prepared that what comes will be unique. As I previously reviewed her Suicidal Yodels and the Black Widow recordings as well as Live I was pretty aware of her surprising possibilities and the vocal arsenal. This incredible cooperation however again took me by the surprise.

But no one could really expect that she will team up together this time with the prominent celebrity countertenor Andreas Scholl and the Baroque Ensemble (La Cetra Barockorchester). To spice it up even more, add FM Einheit to the pack, the drummer and the creative force behind famous German band Einstúrzende Neubauten.,

And no one could guess what it is all going to be about. This is however about Erika’s father, hence a Spanish tittle Pepito. As it refers to her early childhood memories and needs more explanation it is better to read what PR says about to gain as much preparation as possible. Blended with quirky sense of humour and shocking graphic design for the digi-pack layout, referring to her deceased father’s live making profession: the butchery.

Repertoire as always with Erika contains her own compositions and covers, on that occasion it is choice of Cole Porter, Billie Holiday, Luccio Dala and Steven Sondheim among the others. Songs referring to difficult relations, or mental troubles. Songs which used to be around when she was growing. Maybe songs she had been listening to with her father, or she remembers him listening to them. Whatever the reason they fulfil the emotional pallet of romance, grand sentiments, simply joys or sometimes great disappointments. In short: all the life has to offer.

Now it all gets down to the arrangements and the performance path she decided to go with to complete that program. And believe me she could do whatever she would like to do with it. But she kept it simple. Brilliant and without overdoing. With well-balanced use of the quest musicians.

Starting with Porter’s Ev’ry Time We Say Good Bye she set up the sentimental mood for the set. Baroque strings, used to play different sounds daily, approach the subjects with an incredible fullness and richness of the sound. Her singing, sweet and luscious, counterpointed with it nicely. And her “trombone solo”, one of those amazing things she can make with her voice refereed to the classic ballroom tradition.

Randy Newman’s Marie, again, sung with the great intensity came together wonderfully with orchestra sounding both baroque and romantic in the same time. It was sung in the way that Tom Waits would probably do that.

But the cherry of the pie are obviously duets with Scholl here. Like one in Lil’ Sister, where they both create gentle harmony in almost non-existing canon is splendid. The call and response in Two for Tea is a final pick, where Scholl sings with an incredible clarity and Stucky with almost laconic naivety. When She tries her “brassy” tricks in choruses, He comes in response with slightly nasal vibrato reminding Louis Armstrong’s manner.

Stucky’s own Stacheldracht (Barbwire) with strings merged with percussion dissonance brings to the surface FM Einheit’s contribution in most visible way. Here reminiscences to her father are hitting the surface too. They have emotional tension which is hard to omit but somehow songs from the musicals are holding emotional deposit in the better way for me.

I could go for all of them one by one but it is not the point. Everyone should do so for himself and feel it. This is the music to FEEL more than to listen. It is very private and very exhibitionist in the same time. It contains huge deposit of emotions and layers of beauty and touch-ability which must be soaked by an open heart and mind. The beauty which takes over you in most natural way.

you can buy this music here: