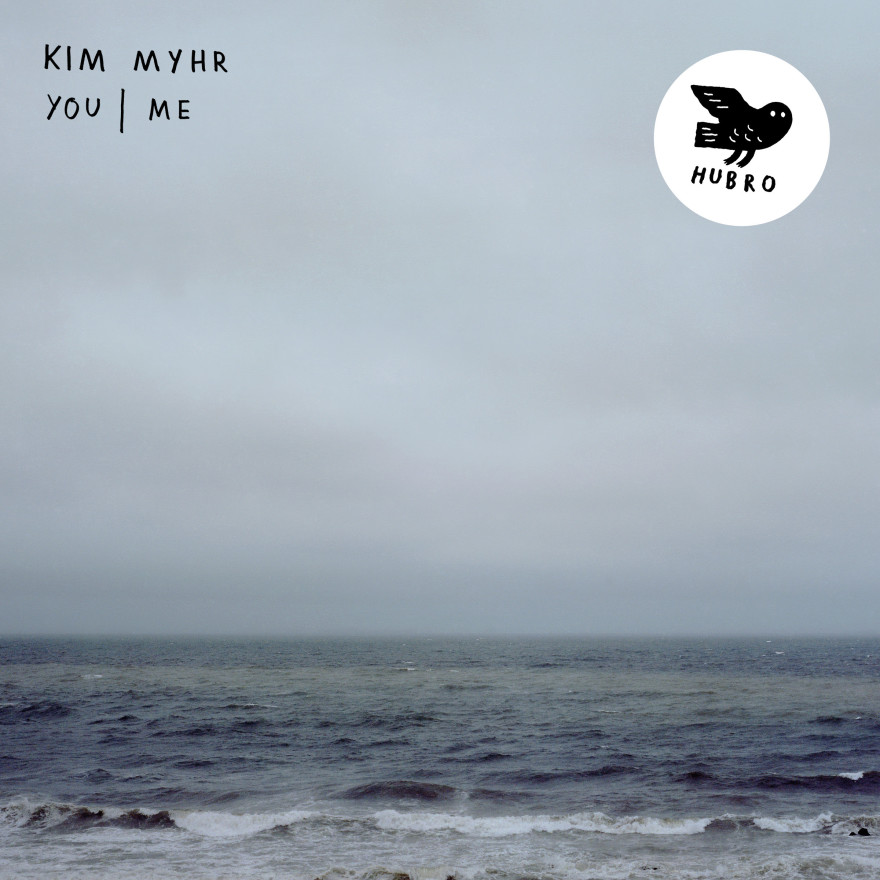 As reflected in Tebbe Schoningh‘s atmospheric cover photograph of a seascape – an image which Kim Myhr says he imagined before any sound was recorded – the music on ‘You/me’ is suitably oceanic: a tidal flow of immersive sound saturated with the flotsam and jetsam of incidental detail. Structured over two ‘sides’ (the actual A and B sides of the vinyl release), which are themselves reflective of whatever further binary pairings you wish to apply to them, as in cold/warm, inside/outside, culture/nature, urban/rural (although the difference between the sides is never entirely clear-cut), composer/guitarist Myhr has created two continuously shifting and shimmering long-form pieces centred around the same repetitive rhythmic pulse.

Partly built from the ground up by the over-laid guitars and electronic add-ons played by Myhr himself, this pulse is also the preserve of the album’s three guests (the only other musicians involved), star drummers Tony Buck, Ingar Zach and Hans Hulbaekmo. The result is remarkably effective: music that you can get lost in, a dense accumulation of sonic information where the process of perception becomes as important as the object perceived. Once the pulse gets underway, the organic-seeming development of its infinitesimally changing yet essentially static formal structure makes listening to ‘You/me’ as easy as breathing, while the often ecstatic, blissed-out soundscape carries a particularly strong psychedelic charge. Indeed, listening to‘You/me’ could be a stoner’s delight, like staring at the pattern in a carpet until it starts to take on a life of its own.

The pleasures that ‘You/Me’ offers the listener also relate to the beauty of the actual instrumental sounds that comprise it. Like the original ECM recordings of Steve Reich’s ‘Music for Eighteen Instruments’ and ‘Music for a Large Ensemble’ – works whose minimalist aesthetic, shimmering timbres and extended rhythmic pulse Myhr’s methods inevitably recall – ‘You/me’ has an absolutely gorgeous audio-palette of delicately dappled sounds. The subtly distressed textures of the many layers of guitar (including, especially on the B-side, Myhr’s trademark acoustic 12-string) create a kind of soothing chorus that is both very calming and meditative yet, on another level, deeply profound, suggestive of devotional music from many disciplines, including the Hindustani classical traditions Myhr has referenced previously. Perhaps there is also an unconscious echo, in the complex layering effects, of Durutti Column, the project of guitarist Vinni Reilly first recorded by Manchester’s Factory Records,.

KIM MYHR You | me

‘You/me’ was recorded at The Sound Office in Oslo, January – May 2017, mixed by Johnny Skalleberg, mastered by Marcus Schmickler, and produced by Kim Myhr.

“As the product of a five months-long studio-process which can itself be compared to a kind of immersion, ‘You/me’ represents a significant departure for Myhr following his 2016 collaboration with Jenny Hval and Trondheim Jazz Orchestra on the album ‘In The End His Voice Will Be The Sound of Paper’, and his second solo album, ‘Bloom’, also from 2016.“This is the first time I’ve made a record where everything is derived from one specific musical idea”, says Kim Myhr of his latest release. “It’s also the first time I’ve composed music with one pulse present throughout the entire record. I wanted the music to be saturated with details, up to the point where you feel you’re almost swimming in them, while at the same time keeping a simplicity in the form, so that the music could be experiences as one continuous state. During the creative process I thought a lot about opposites, and about the sometimes invisible line that separate them. One of the interesting things in working with longer forms is that you can erase that border and let lush and idyllic material gradually become something more difficult and inaccessible. This can remind us that contrasting conditions are present within each other all the time; that inside something, there is always a trace of ‘the other’”.