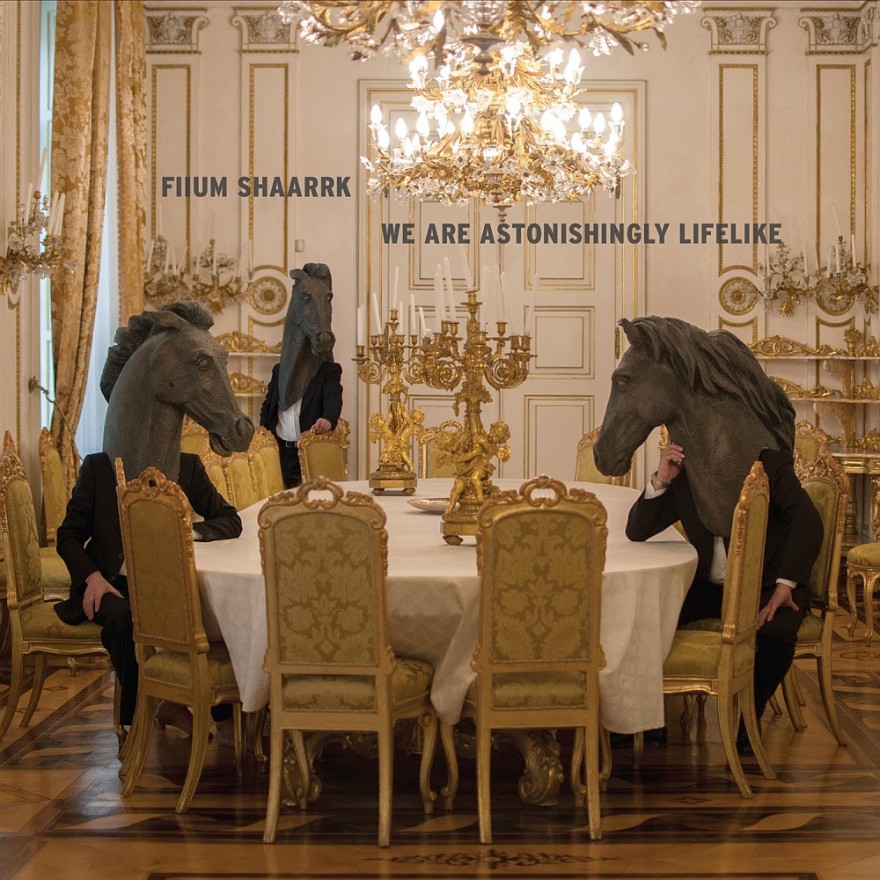 Five years on from their debut album ‘No Fiction Now!’, Fiium Shaarrk, the trio of Rudi Fischerlehner (drums), Maurizio Ravalico (percussion) and Isambard Khroustaliov (electronics) return with their second album; “We Are Astonishingly Lifelike”. The album documents various stages in the recent life of this continent-scattered ensemble, and was written and recorded in different studios between Berlin, London and various other European cities that have hosted the band for festivals and concerts.

On the release of their first album; “No Fiction Now!”, the group were described as sounding “Like famished animals whipped onwards by drum and hi-hat, processed electronically but gripping onto materiality by their ngernails” (The Wire), and provoking the sensation of being “(…) essentially blind in a fighting circle of beats” (DIY magazine). With “We Are Astonishingly Lifelike”, Fiium Shaarrk expand on these attributes across 7 compositions, each of which explores a different facet of the group’s vocabulary.

As Neil Bennun alludes, in his liner notes for the album, there is a sense in which the results are perhaps best described as if they are a kind of sonic architecture. To quote: “… the music erects its own interior, and we can walk inside to inspect it. It is a modernist edifice decorated with quadruple-time bass drums and ride cymbals and metallic percussion; the skirting boards, carpet and underlay are digital. (…) We have a very disciplined gale of percussion, sub and inscrutable arpeggios. Finally, the source tones peek through. It’s horns, or piano, or glass, or vibraphone. Or none of these.”

The metaphor is further alluded to by the cover artwork, where Fiium Shaarrk articulate a sense in which they are perhaps best comprehended as storytellers in a palace of electroacoustic music, able to pick out and elaborate both micro and macro musical scales at will, whilst tracing paths that fuse, amongst others, the footprints of Karlheinz Stockhausen, Edgard Varese and Luciano Berio with reflections of Batucada, Dub, Post-Rock and Drum’n’Bass. “We Are Astonishingly Lifelike” renders an improbable symphony of influences into a uniquely compelling odyssey.