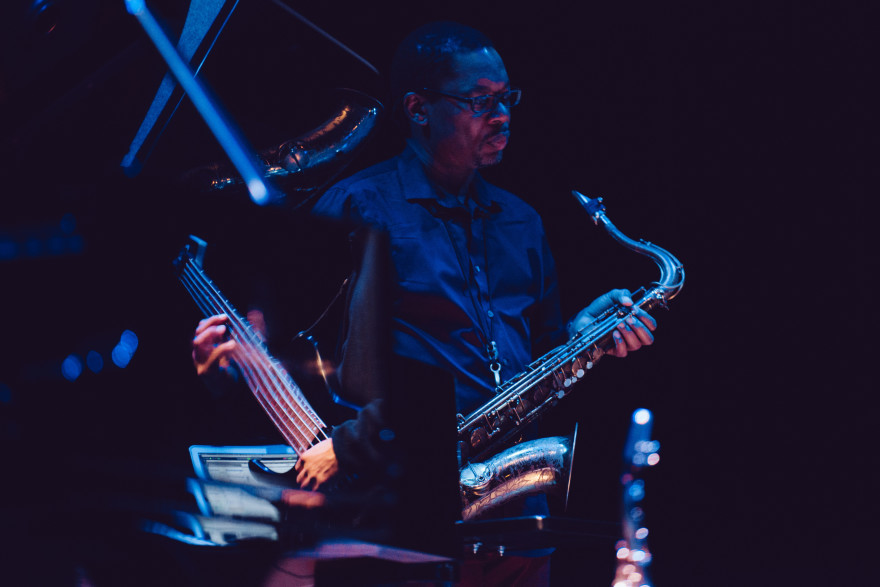 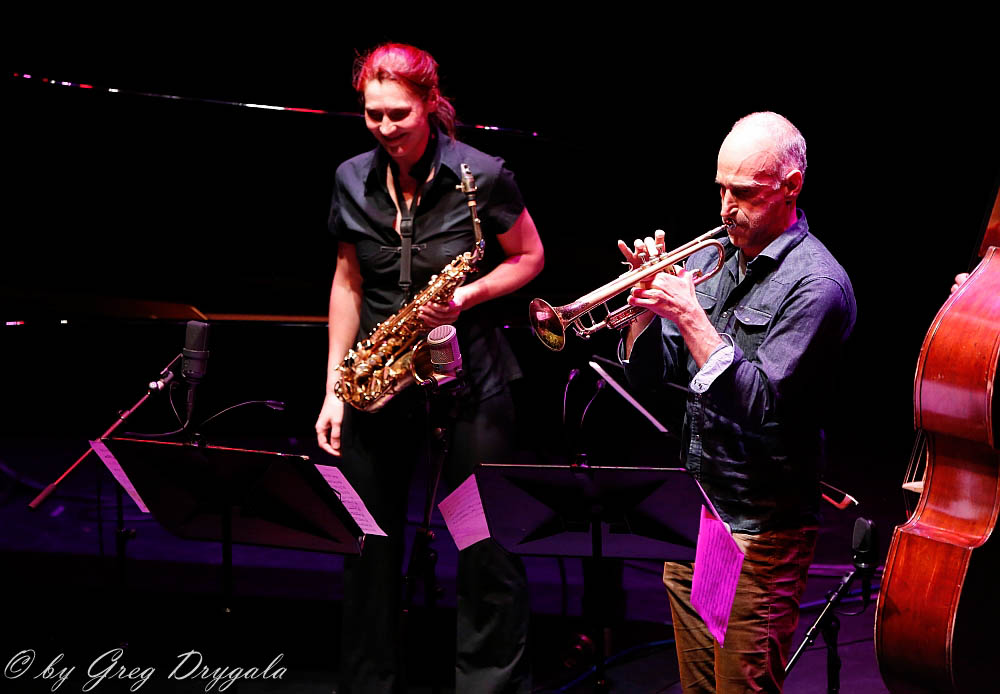 Here we have an interesting bunch of personalities.  Excellent rhythm section with an outstanding Eric Revis on a double bass, whose elegant time keeping is already legendary and the equally legendary Gerald Cleaver behind the drums.  He spend a lot playing with big wigs of the modern sax improvisation like Joe Morris, Mat Maneri or Roscoe Mitchell, and with  equally challenging bass men, like Miroslav Vitouš or Michael Formanek to just mention two of my favourites.  Ralph Alessi  completes  the list of Americans in this international quintet.  Florian is a native German and Angelica is a Poland born, Germany educated musician. 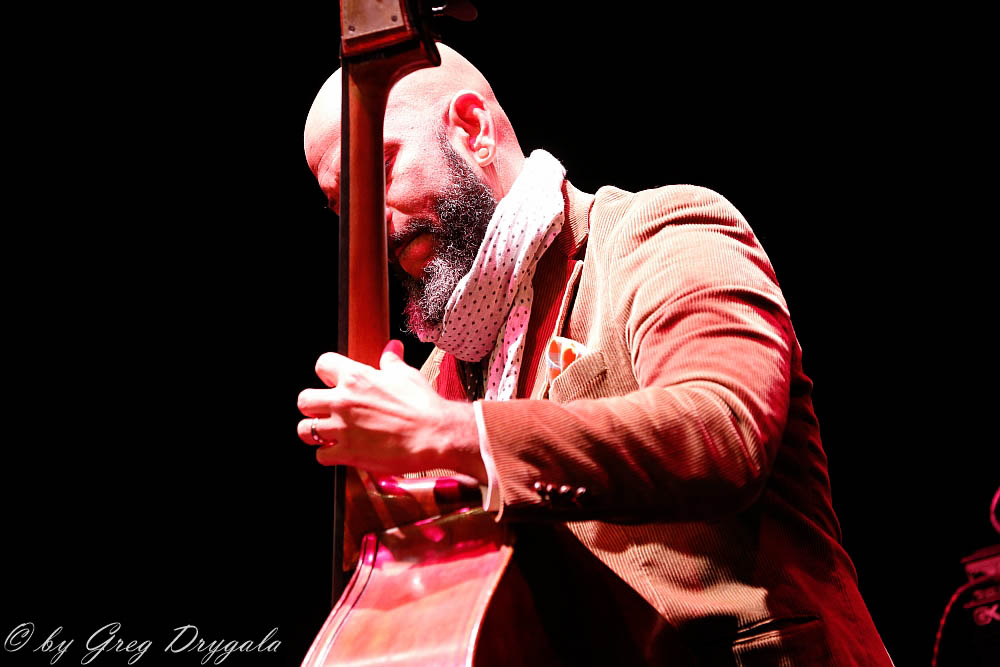 Here, her strong passion for fiery improvisation meets all demands in duos with Ralph famous for his virtuosity and incredible dynamic sound.  The band have a drive and that hits from the first note. This set is very intense with the force provided by the brasses.  Piano more like supplies melodic framework in which they can do whatever their imagination brings to their heads.  Drums equally provide a plot whilst playing not too loud in the background and supporting the already existing complex musical layers.  Equally the bass-man holds on more to the time keeping with only occasional solo appearance, but executed with hard to match finesse and fantastic articulation. 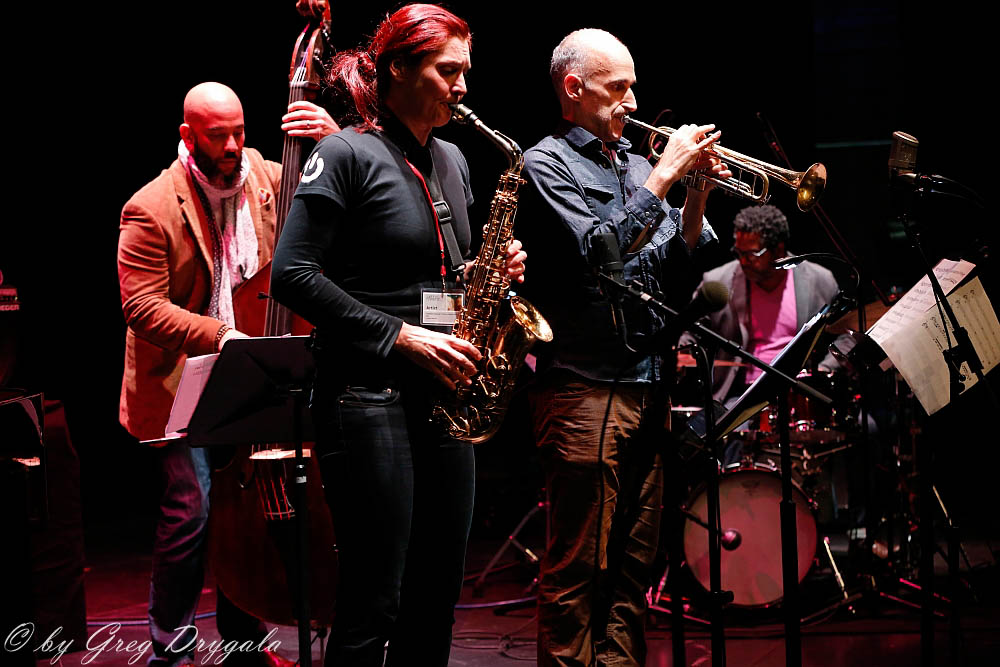 I must say that Angelica really matured and the way she played in this set was less forced that I can reckon from her past recordings and much more imaginative.  She is definitely at the point when she fully developed her musical language and has enough confidence to say it straight out.  There is also a lot of passion and her lines were not just fast but also very lyrical.  That nicely blended with Alessi’s trumpet who kind of represents the same qualities on his instrument. 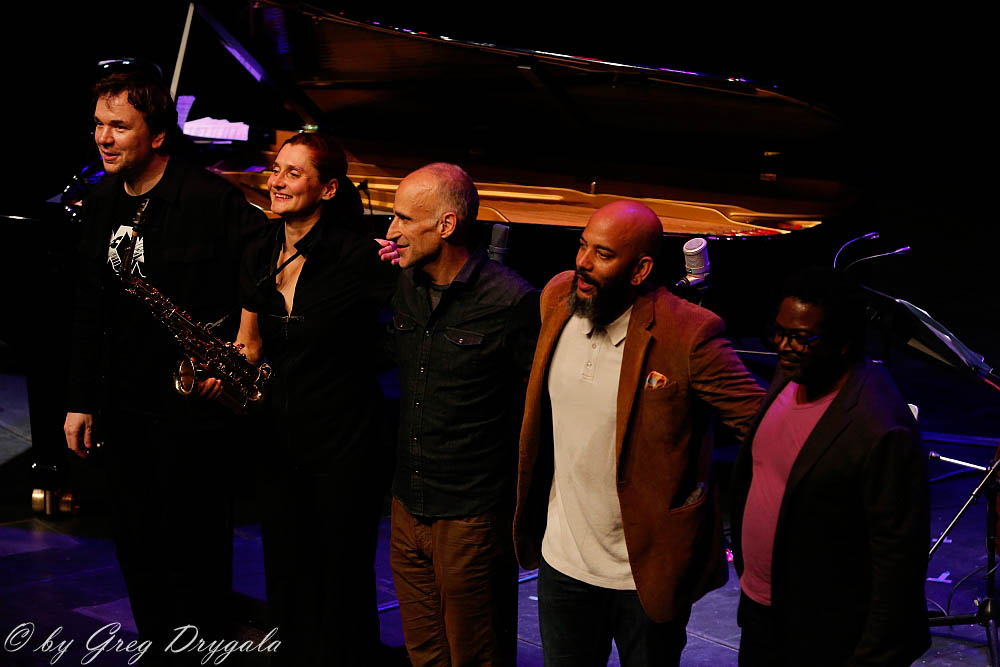 They in fact lead the set and listening to them playing together was a joy.  They also kept nice tonal balance in those fragments which had been previously carried as a solo voice and was vastly responsible for that feeling of integrity.  Wonderful set which really surprised me in all the positive way but also made interested in what they are doing now and going to do in upcoming future as it all too good to give up.  My most honest congratulations for both young co-leaders and the entire band.

Where The Brass meets Maths 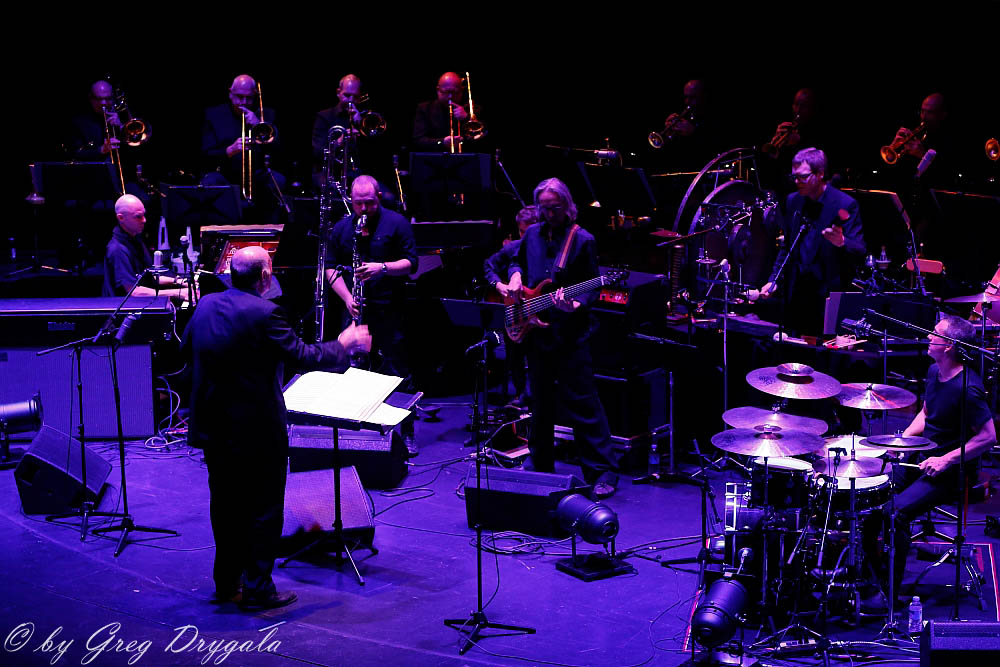 I was long waiting for this set as it was a challenge, for many reasons.  First was of course that Nik experimented with string ensembles or an addition of few brasses to the usual combos he leads, Ronin and Mobile, but never before presented his Modules in such a big scale with a proper big band.   Therefore I was feeling a great hunger to hear that.  I like his music a lot, both acoustic and electric ensembles.  I am finding it often very sharp and clinical to my taste, but his Zen approach and the rhythmic discipline are fascinating me to the level that I can’t stop listening to it.  The music is sometimes freezing to the point of the hypnosis.  Almost like hypothermia to give an example. 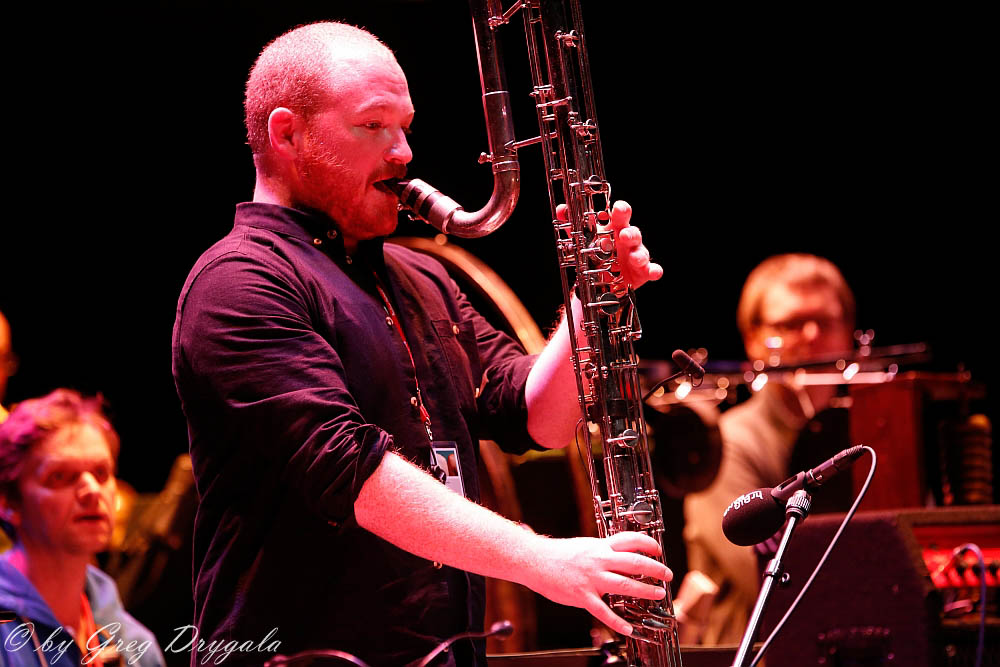 At the same time this is so engaging with its clear logic and the raw beauty.  Mechanical chords from the piano followed by incredibly disciplined drumming with accents from both bass guitar from Bjorn Meyer and the clarinets by Sha complete the picture.  Nothing like that exists anywhere else.  The tissue of his music is very individual and strongly original.  Those four are The Ronin and of course they all were there on the stage.  But there was also their band arranger and conductor Jim McNeely and fifteen other musicians, mostly brass players.  Four trumpets, four trombones ,including bass one, five saxes to cover whole range, a guitar and one more percussion. 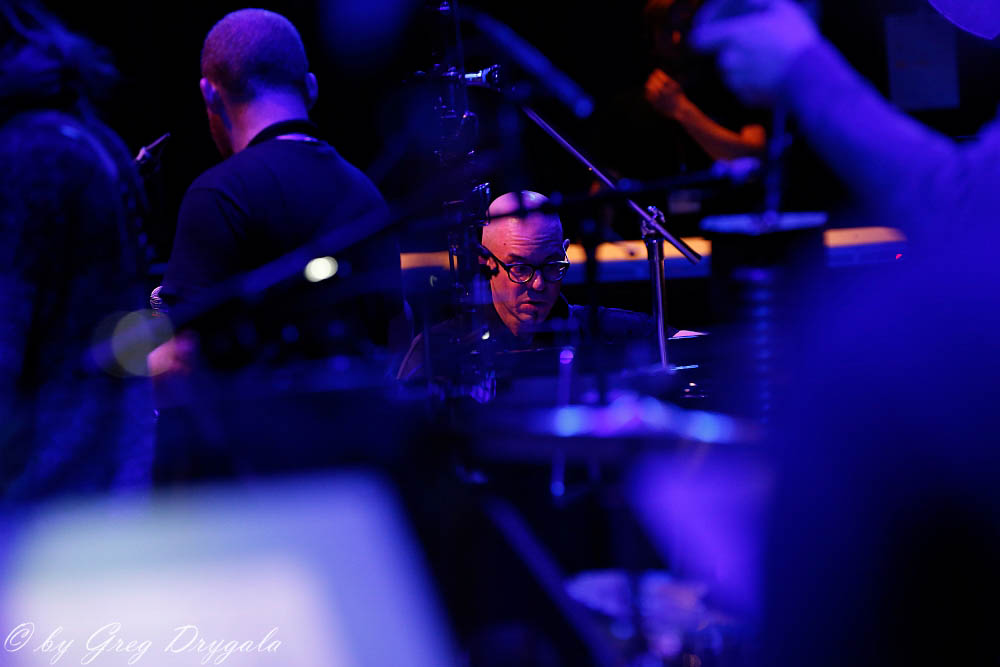 So it was all looking damn interesting.  I was trying to imagine myself how the Modules (as Nik nicknames his pieces) would appear in space in such an extended squad and I must say that imagination didn’t let me down but there was a lot more makeover applied to this set than simple multiplied lines.  The  main and most striking difference came from the feeling.  Of course the whole tissue became more multi-layered when the brass had been weaved in to it.  The balance had been changed and the focus moved a bit from the rhythmic structure, which now stepped back a bit to make room for the glossy and sparkling woodwind universe. 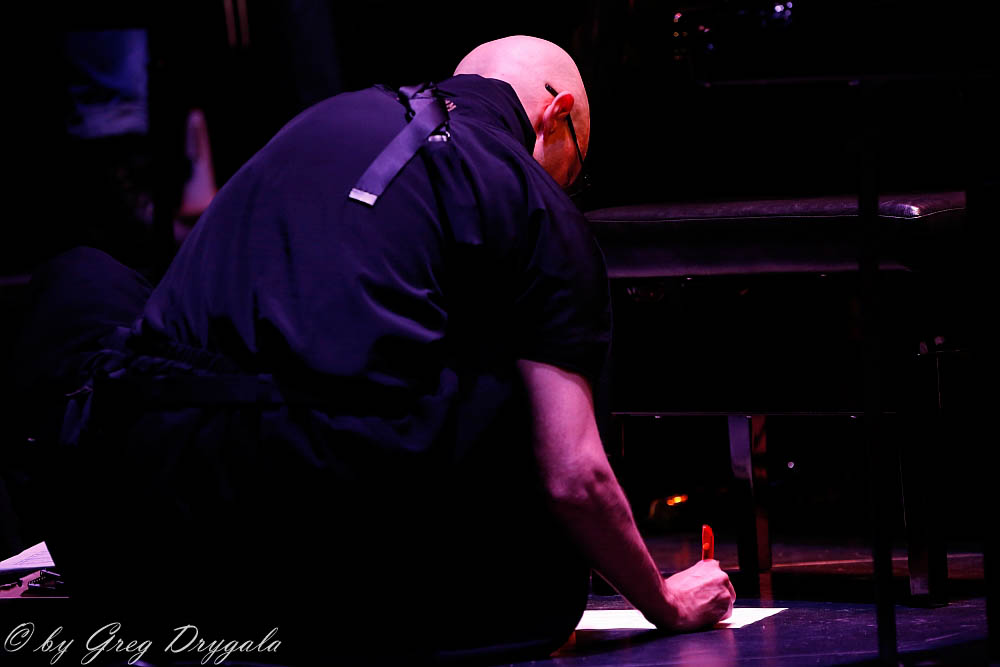 This shift of colours palette made a change.  It changed the feeling from the freeze Nordic-like to more spacious and soft overall balance.  The music therefore reached the new dimension and became more rounded.  More acceptable should I say for those whose been struggling with the surgeon-like precision or percived coldness of the original Ronin maths.  It certainly appealed to me and I liked it a lot.  But I always had a capacity for genuine Nik’s tunes either.  Nerveless it was a vibrant culmination of what was happening in the main theatre today. 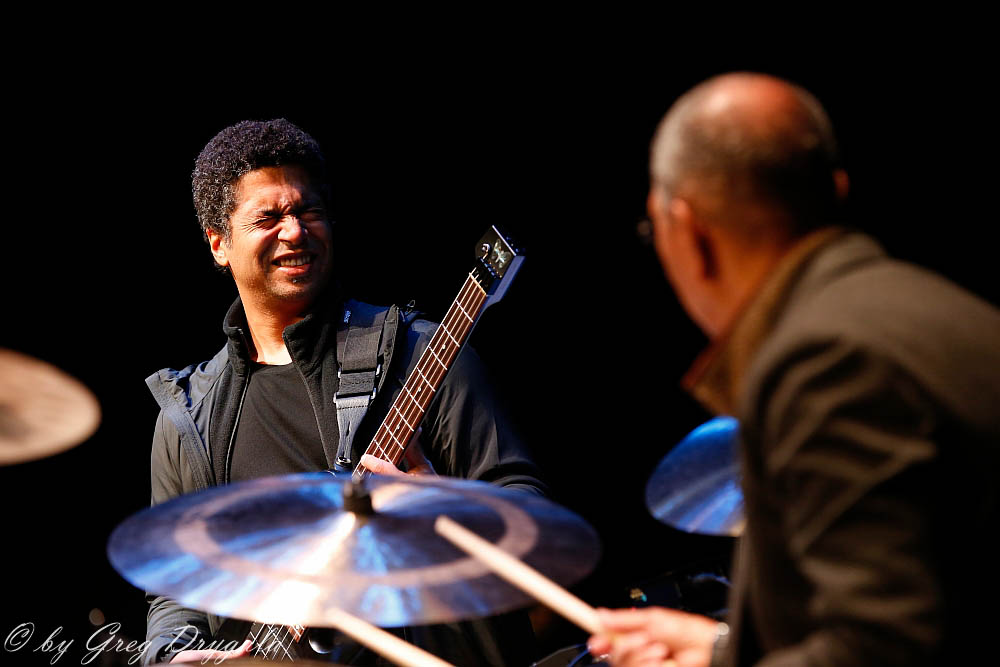 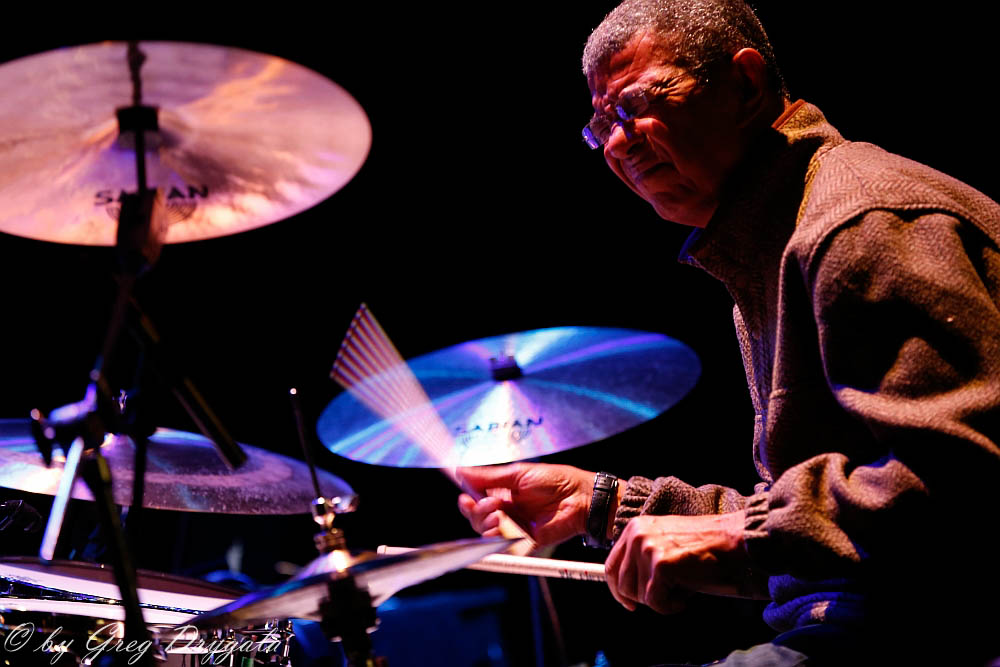 Closing act of the Saturday night had a lot of a symbolic meaning.  Mind the band which contains Señor musician Jack and the children of the two greatest musicians he ever played with during his carrier: John Coltrane and Jimmy Garrison.  More of that the fathers of both youngsters were a half of the great John Coltrane Quartet.  He knew both Ravi and Matt from the day they were born and is even a godfather to the bassist to make it even more connected. 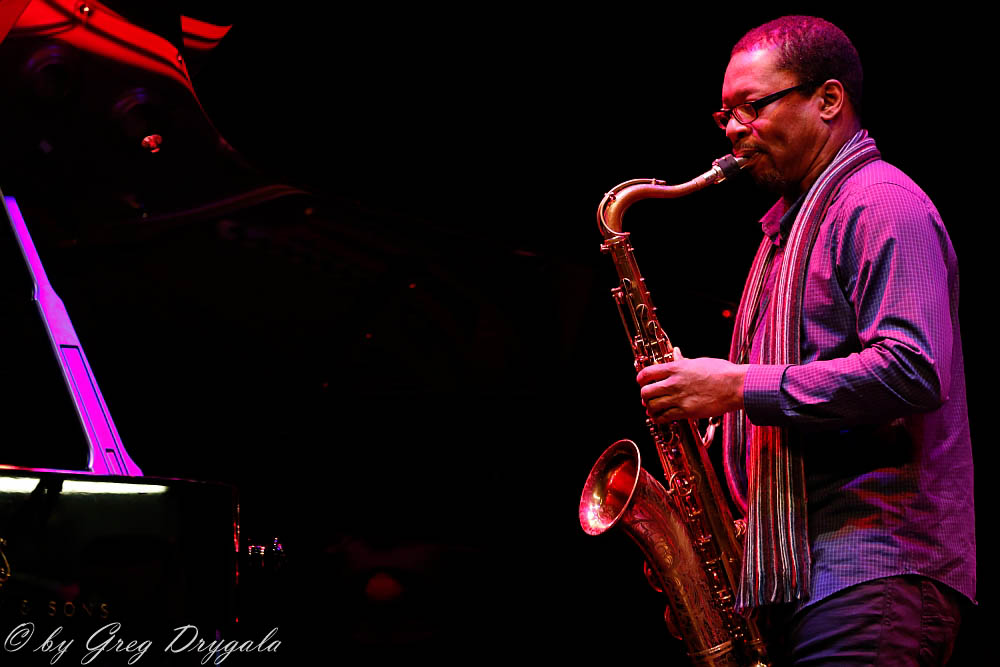 The program they played during this set came from their latest In Movement session released on the ECM label a couple of months earlier.  I reviewed this recording here.  And that must last you for a description for now as I decided to drop this set knowing that it’s on tour and there will be another possibility soon.  Instead I went out in rush to get to the A Trane as upcoming 3rd Dialogue Between Aki and the young player Charlotte Greve was just about to start.  Enjoy few snaps from the sound check then and let’s jump to the next chapter. 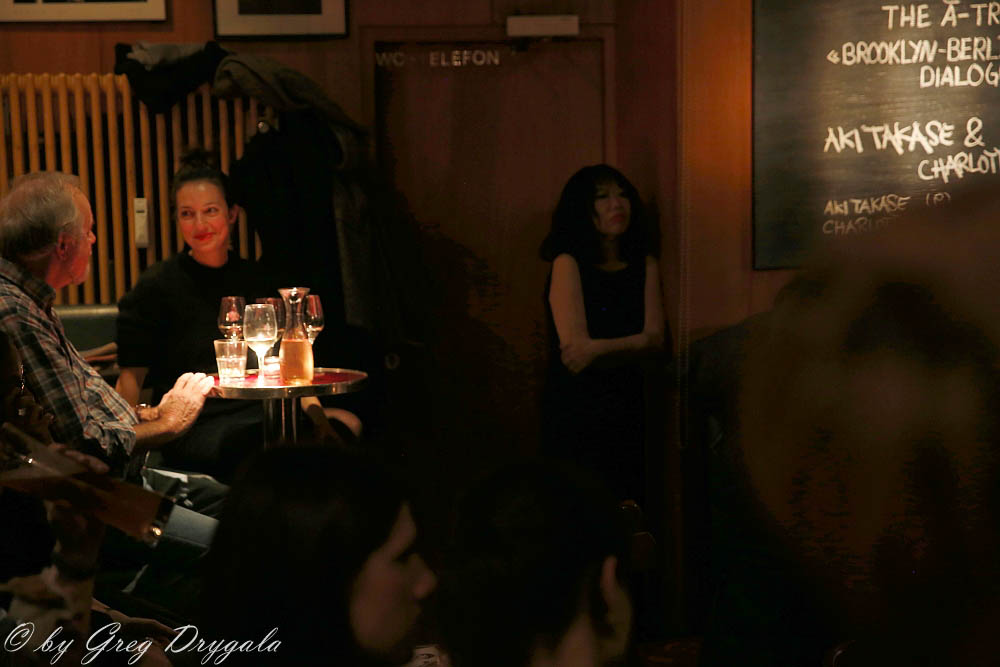 This was the set I was so curious about.  As I said above I love Aki.  But I did fall in love in Charlotte’s sax too in the meantime since I heard her in the same club few years back and then became familiar with her quartet recordings.  But that all happened before she moved to the Big Apple.

Now she is a different creature again.  More mature and it is clearly audible that after all what’s happening now she developed her musical language fully.  Deep in the corner of her soul there is still the same Charlotte.  A little bird looking like she is dreaming with her eyes wide closed but an open heart singing for you.  She is a true poet of the saxophone.  The way she plays.  The way she builds up her phrases.  So distinctive and lyrical that one can almost turn them to the words as he listen.  I certainly do.  Her honesty is her strongest weapon.  It is not possible to not to sense it and therefore avoid.  It gets you like an atomic bomb.  You can’t run away. 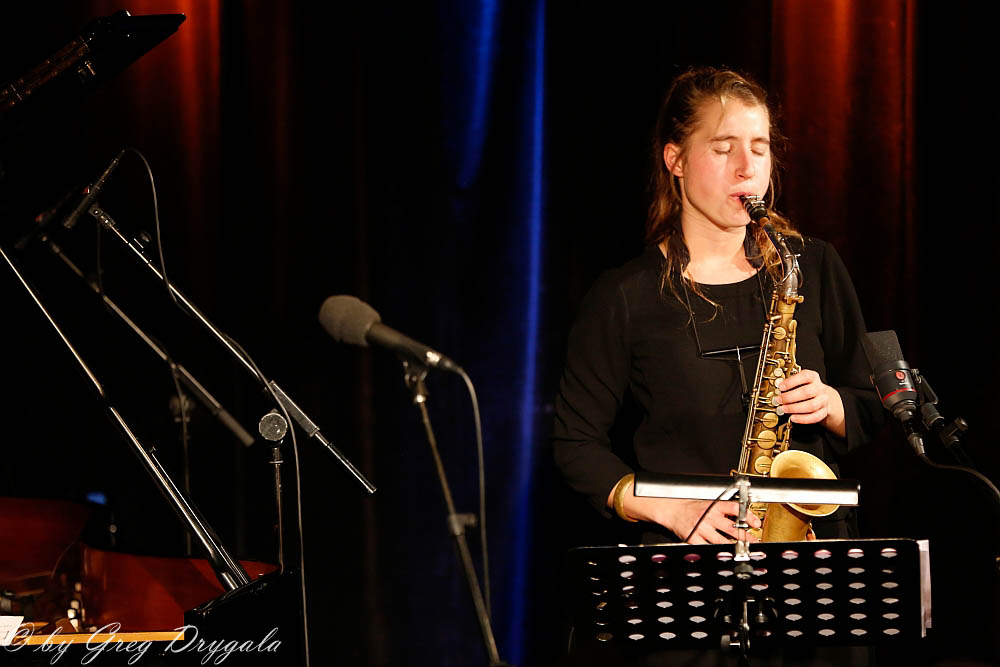 On the other side there is Aki.  Great Aki, who can put spell on you with one note hit.  Like thunder.  She can look at you in the same way too, so be aware.  She is a wizard of the piano and regardless of how many times I heard her playing I will be always go back for more.  I am a believer. With Aki there is no hidden agenda. When she is pissed off she will play it out then you know.  If she is thrilled her music touches you in the most gentle way you can only imagine yourself.  If she is? I had been lucky enough to feel it few times, which is a lot of luck I would say, for someone who is not a Berliner.  And this night I could feel it again.  What a blessing!

Despite of being completely different energies, let me say The Fire and The Wind, those two merged together into most intimate dialogue one could imagine himself. Aki surrounded Charlotte with all her love. Sensed her gentle sensitivity and invited her into an intimate conversation in the way just only one women could do to another.  And so she responded.  Again with all the trust she sensed and in such a female way. I felt it, and it was not a masculine thing, it was the essence of the power of the feminine.  It really has to be heard to be understood. 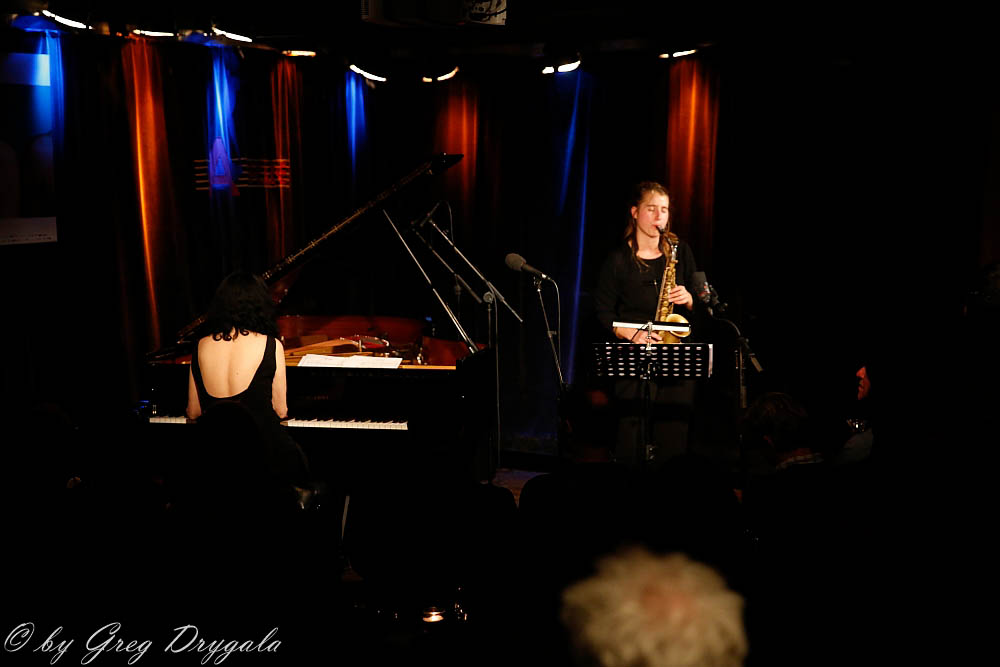 Charlotte herself started with one of her recent pieces Crickets issued last year on her Live recording on Berlin based Traumton label , she is still with. This is wonderful composition showing entire scale of her romantic nature. I can listen to that one every day. And in fact I do as it lives in my car’s changer. I could say much more about that but what really matters there were all these nuances which made this conversation. This is what made a quality and turned that gig into unforgettable experience. 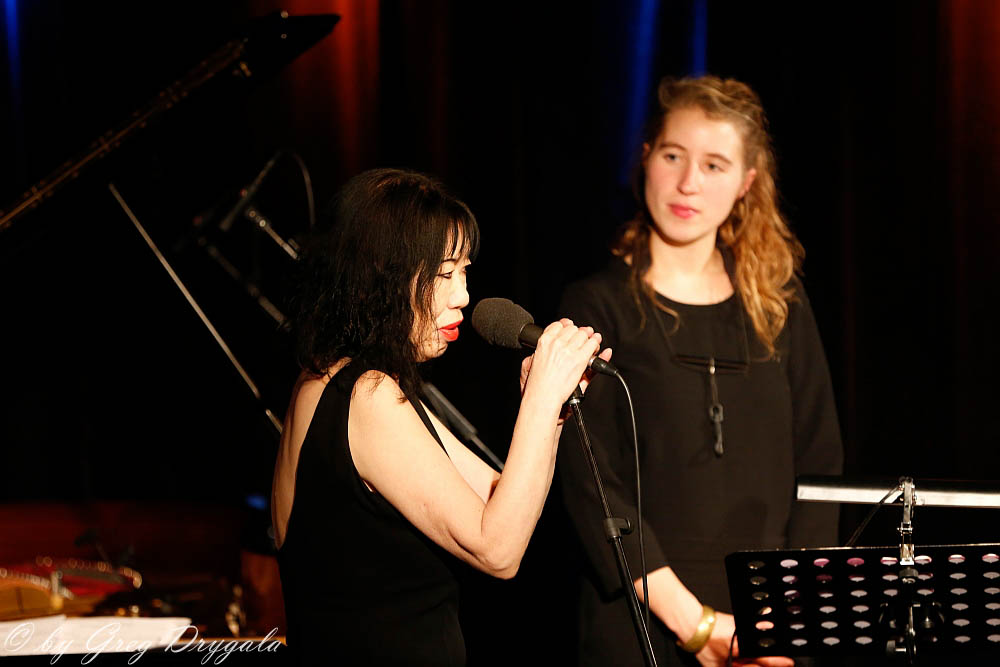 This is spiritual plankton drifting in the air and giving a twist to your soul and dazzling your mind.  It left me speechless, begging for more.  And the second dish was coming soon after short break.  That removed Lucia Cadotsch Trio from the menu for me completely.  No way I would walk out. 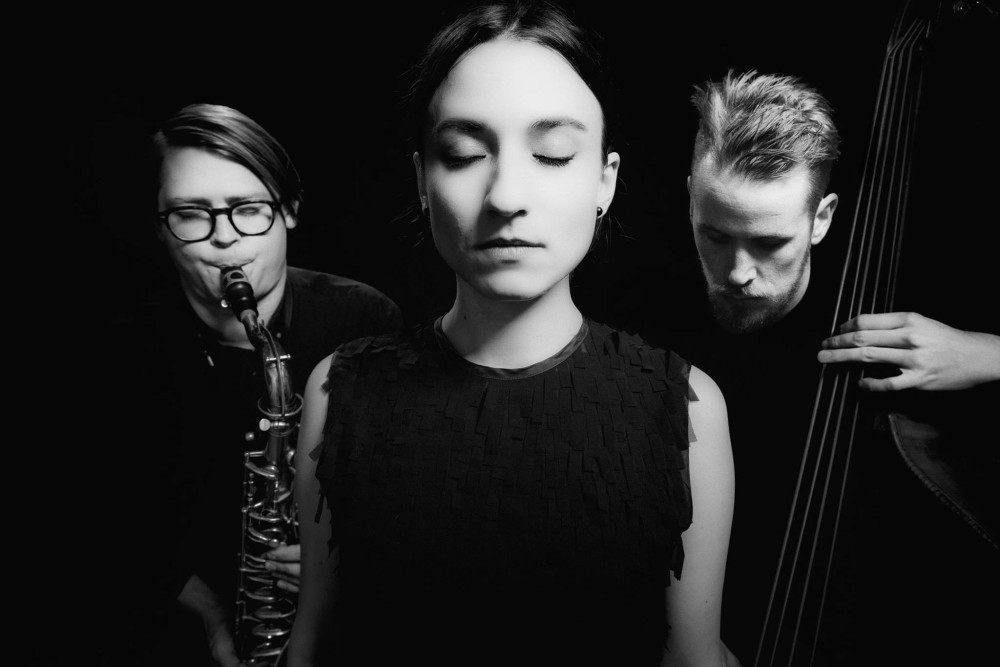 Awaiting for report from my fellow journalist and photographer Sergiey Gavrilov , stay in touch 😉