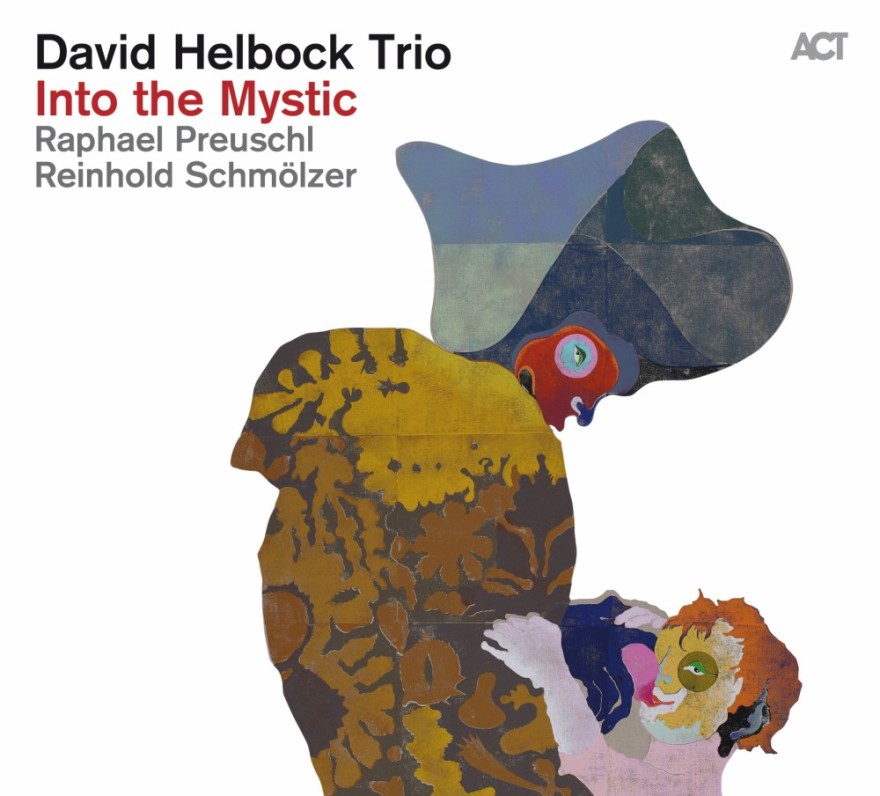 Watching this ACT début for David Helbock I can see the same scenario over and over again. I’ve known this artist for 5 years and when he started to establish himself under Berliner Traumton label for which he made five recordings. But he wasn’t shy even before having being present on at least ten others under his own name all collectively. Two of those I had a pleasure to review before so I have seen some growing up process too.

Let’s jump Into the Mystic then. This trio is a “proper”piano trio with the rhythm section just like his last “Traumton Trio” was but with a small personal shift behind the drums. Completely opposite if compared to his previous Random Control Trio made with two brass-men.

General sonic universe presented here lays close to what I did hear on the Aural Colours and comes somehow as an expansion of the ideas which had been already present on the preceding one. Doesn’t matter the label. So here we have an influence with the classical pieces as well as vital experiments with the prepared piano. I guess then that a drummer makeover brought the biggest change and refreshment to the way the new Trio does sound.

Material on this ACT début can be split into two main themes. The main core is a foundation built on the previous trio experience. The 2nd is build around Star Wars Suite which remains twisted around the rest of the material on the CD. It contains three takes of the Exodus crowned on the end with a Theme finale.

Classical influence is represented here by the 2nd Movement of the Beethoven’s 7th Symphony,which acts as an opening tittle. And due to it’s monumental depth it makes a fantastic intro into what’s happens next. Arrangement is just a piano script which keeps the simplicity of the melody but gives as well a room for preparation of the piano.

Next The Soul comes smooth after as a natural consequence. It’s the pianist’s own and it holds some serious “motoric” motion constantly present in Swiss Nick Barstch‘s game. But here it is all about the Soul, not the Maths. In opposite Helbock is a Romantic spirit himself deeply inside of his artistic being. Prepared piano however has a massive deposit of energy which comes out in the most natural way.

Spiritual Monk which follows is a charming musical puzzle made of pieces of Monk’s chords. All nicely blended together with David’s own invention into lovely mellow ballad, not free of nice tensions in precisely build up culminations. Here the new drummer’s contribution (Reinhold Schmolzer) becomes most audible for the very first time. As we have heard Thelonious‘ music performed by Helbock’s Trio before, one can reckon it was certainly a different Monk.

Lovely energetic Louerture coming next is a bass-man ‘s original. It still have some Monk-ish mood but what feels it is a meaty and rich tissue. With hugely dynamic prepared piano chops and cymbals build rhythmic construction which serves as a framework for entire recording.

The same qualities we are hearing in the following Eros, which are there surrounding a fragile melody introduced by piano. Here the drummer’s skills are speaking for themselves. Connection between him and the leader shows a bridge of the concept.

Tittle Into the Mystic belongs in the same camp as one can imagine. Those two are among the best pieces on the recording with piano and drums sounding like a single organism.

Funky piece called Maks on the contrary, being a full of the same percussion glitter coming from both a piano and drums sounds more like a Chopsticks. A version for an advanced listeners. With the simple melody line played forward and back acting as a chorus. More gimps are coming in a second part but overall character stays on a funny side.

Thad Jones‘ A Child Is Born swings between the deeply Romantic ,Chopin like piano lines and general Hymnal feeling this piece posses being a Gospel.

Closing The World Needs More Heroes catches up the same emphasis and as such makes a wonderful outro for a whole project.

Now, I left the best for a desert. Star Wars Suite.

This is the music which every one immediately recognises and honestly the makeover that the Trio gave to the Soundtrack is both entertaining and adorable.

1st Exodus catches up with a monumental Beethovens’ symphonic intro but soon it twists into French Romanticism piano corner brining memories of Faure’s music to me. 2nd Exodus not only keeps that mood but explores it further. It sounds like The Music had been written either by Eric Satie than Gold & Williams. Immaculate. 3rd Exodus holds fragile Gymnopedies like charm but moves gently towards Debussy’s harmonic departure. What a lovely twist that is !

Then it comes The Theme. It starts gently with the same Gnossienne like delicacy, with a piano interlude bringing the change of both speed and the dynamics. From that point piano starts to be percussive with the bass and the drums building up into the massive culmination. Therefore all Trio sounds like a running mad percussive squad. With a gentle tension realises comes to the rescue with nice pianistic miniatures acting as a brakes.

Fantastic recording it is and it shows Helbock’s sense of commercial departure growing but luckily without sacrificing the qualities he already had and presented in his existing discography. I hope we all are going to hear the best from him yet, but for now get that one and enjoy it as it truly deservers this.