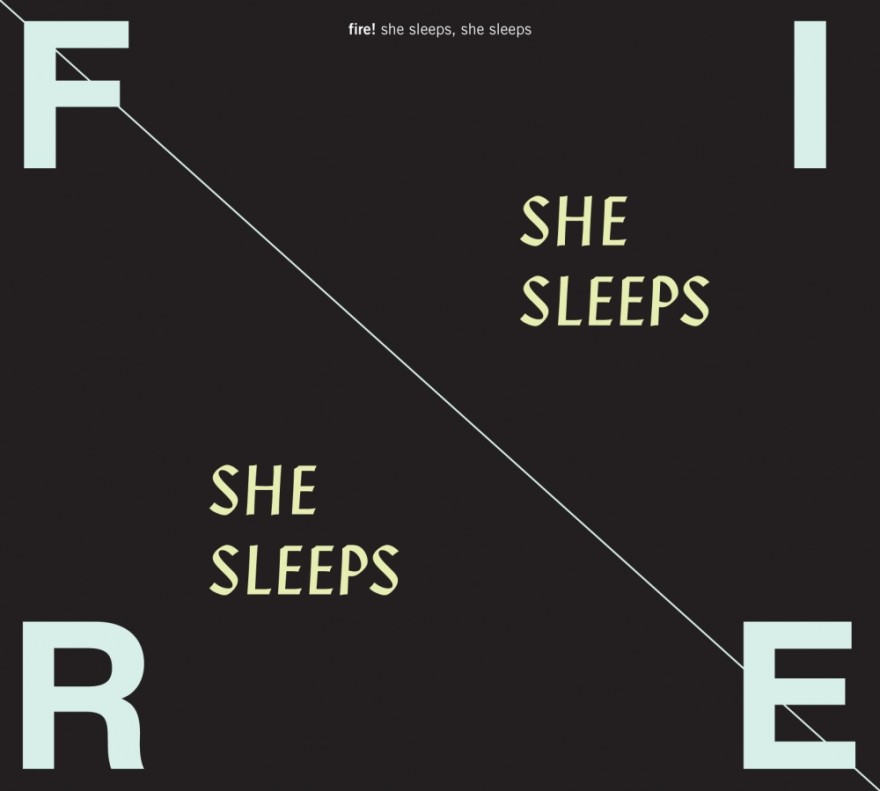 The Fire! recently active as an 18 musicians Orchestra incarnation, still downgraded from 30!, somehow – don’t ask me HOW? – found the way to make that trio recording possible. But bless them they did as an album is remarkable. As I head a pleasure recently to hear the Fire! on stage in their furious Orchestra-charged ride. With a number of gigs and rehearsals taking place plus few Fire! Orchestra recordings made meanwhile it is simple a miracle to me.

Getting back to the subjects it starts with Fire! as one should expect. But Rock alike energy here is just a surface layer. This LP is only four tracks but each has its own significance. She owned his voice is an opening one. From the initial energy escalation and Walkerian ride it moves slowly but firmly towards more modal jazz improvisation, with the lovely long lines played by Mats fulfilled by equally stunningly working rhythm section arm in arm.

Tittle She sleeps, she sleeps is my favourite one here. It contains in the mix the guitar of Oren Ambarchi. The sleepy, almost somnambulist feeling which comes from the monotony of the percussion framework that Andreas developed here is captivate. Hypnotic guitar loops are heavy and hanging around like a foggy cloud. Matts’ tenor lament builds around that and gives piece a drive. Emotional intensity makes you feel like you are dreaming one of those dreams which paralyse you but in the same time fascinates to the degree that you won’t to wake up. Ringy sounds of tortured strings are counterpointing lovely with a long decay of bells strongly hit at each brake. The piece dances in your head like Bolero as it counts alike on 3/4 too. It is like day after night, all over again. You don’t want it to stop. I do not want it to stop.

She bid a meaningless farewell which comes after starts with ascetic drumming with a massive gravity. Handled mostly on snare and toms it makes almost tribal appearance. Matts lines are drifting on the waves in silent natural way. The brake comes with cello pizzicatos added to the mix, played by Leo Svensson, which naturally blends with the drums into gentle harmony, to merge into the silence at the end.

Closing, she penetrates the distant silence. slowly, is a show of Johan Berthling’s pace keeping capabilities. Specially interesting giving his reputation of the rough sound making player. His opening riff, keeps it pace perfectly from first to last note and creates a core of the tune. Matt is swinging around that with his sexy rounded, alluring lines like fallen angel in a go go bar. The music is dark and viscid. Smoky thick and full of suspense. It sneaks like a darkness and in the same time steps light like a temptation. Cello Arcos, present in this tissue as it comes closer to the end, makes it fuller bodied and harmonically rich. It comes into gentle choruses with airy sax at some points when their paths cross. I love that recording madly and sure everybody will! Not just a trusty Fire! fans.