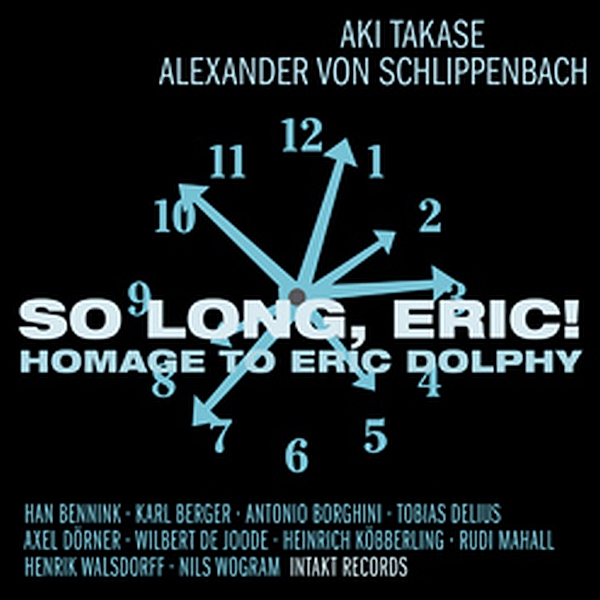 This fabulous recording made for Swiss Intact Records famous for their improvised music catalogue is not a first affair for the artists above. Both pianists are leading figures in the World of improvised piano music. More of that most of a brass players here are a long time collaborators too.

That makes the project mature and well thought out as the seeds of Eric’s soul had always been present in their music vocabulary. The nine composition which had been chosen from the Eric’s portfolio are all well known, but the touch of genius given to arrangements by both artists (privately they are married couple) gives them a new life.

Knowing Aki’s and Alex reputation one could expect something put completely upside down, with the glimpse of the melody hardly traceable. Nothing like that had happened here. In fact they used exactly Eric’s techniques to build up the momentum.

Wide intervals played by both pianos with an addition of preparation sometime, changes of tempo and metric aspects brought back an entire layers of vitality so present in Dolphy’s music. Using Karl Berger’s vibraphone they managed to anchor the concept somehow in the sound of 50’s and 60’s. Just as it has sounded there with a rapid feeling of authenticity.

Hat and Beard is one of the perfect examples here. Multiplied brass section which is playing pieces with tempos frequently changed , in chorus or unison was like bringing the band of Eric’s clones back on the stage. Kind of a musical joke referring to his multi-instrumentalist skills. He didn’t play trombone or trumpet of course, but it is not a point here.

Multi layered brass has a power of much bigger combo than the squad might suggest. Listen to Prophet and you will know immediately what I do mean. Additionally the co-operation between Rudi Mahall on clarinets and Nils Wogram on trombone brings back Eric’s onomatopoeic trips to my memory, something what attracted me to his music back in time so strong. Both musicians posses an extreme sense of humour, with Rudi being really the one of his kind.

His bass clarinet solo on 17 West makes a great afford to reconstruct Dolphy’s sound with phrasing so close to the original that only different tone proofs that it is not. In this piece all the tradition is present. The Fats Waller’s rags,  Mingus’ twisted harmony. It all shows not only Eric’s music itself but also prevents a context grown in and reaped from before matured to its own. As such this brilliant recording becomes not just the Dolphy’s tribute. By the prism of its well shaped respect for the tradition it is also a homage to entire jazz heritage with the be-bob music particularly.

It never ceases to amaze me how the greatest improvisers in fact always stay in a circle of the tradition. I believe that it is nothing but deep understanding of roots which bring the steam to the wheels of the avant-garde and give them that drive. Other way nothing ever grown without the seeds being put into the ground first and this 67 minutes of music is the best proof of it.