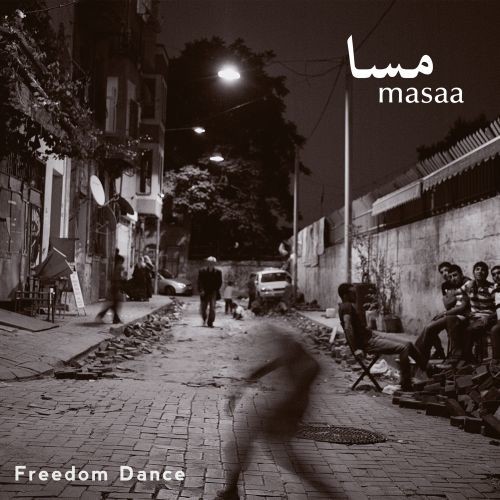 The Freedom Dance project by Masaa quartet led by a Lebanese vocalist Rabih Lahoud is one of those recordings which immediately got my attention. Why? Because there is something that strongly catches your ears once you hear it. It is so beautiful and lyrical there’s no doubt it can not leave you inert. More of that it is one of those living evidences of these changes in modern European culture we are just witnessing now, maybe not even being fully aware of them.

Lahoud should be more named a poet, than just a vocalist. He sings in his native language ,but if you go to the band’s website and have a look at the lyrics you will understand what I mean. Sometimes just one phrase, like in the opening title Freedom Dance: My heart, please don’t forget me and dream on which is repeated like a religious mantra, but it just brings meaning to the words.

Fragile and gentle Longing ,which comes after is about looking for self identity. Beautiful lyrics which thanks to label’s care come together like a book of poetry, not just linear notes.

Masaa, is a tricky one. It reminds me a lot Kate Bush’s Snowed in the Wheeler Street from 50 Words for Snow LP 😉 With Similar chords progression and the mood set up that close . That’s the general thing about this music. It sounds familiar, but soon you reckon that all compositions came from the band mates and in fact you never heard them before.

Here it’s like a bridge between the East on the one side represented by the singer and the West on the other coming from the trio of young European musicians. Those are well educated, well hackneyed, shamelessly adventurous and deeply interested in world music and playing with different aesthetics, mostly related to the jazz, on a daily basis. This cocktail of skills and boost of creativity seasoned with mutual inspirations and lots of fresh ingredients brings to the table an extraordinary dish. It does taste unique – believe me.

On the other hand it’s anchored deeply in continental music tradition. You can hear that core. It is there. Listen to Abadi , Ma t’ illi or Tlal. In each of Marcus Rust’s horns are supplying solos constantly referring to Northern nostalgia. Singer’s effort brings this special flavour over this, deepened with the mood bought by an oriental language.

But deeper listening to pieces like Asrari ,Ya insan or closing Rima for example, is showing qualities we already know from medieval Laudas. It shows clearly to a careful listener that cross talks between Orient and Occident are already historical facts and they made imprints into the traditional harmonies far before we even started to think about it. That mystic charm comes out of this music and doesn’t let you go.

Pianist ,Clemens Pötzsch ,vastly aware of what happened in a jazz piano over the last 60 years keeps the balance of the project in the iron fist. Dancing between frugal world of fragile phrases ala Paul Bley and full of expression rhetoric of Keith Jarrett. But the real master chef here is the drummer- Damian Kappenstein. I had a pleasure to hear him in many different projects and I am well familiar with his amazing abilities. This man alone can conjure up a whole sonic universe for you within a minutes, with whatever he is able to squeeze the sound of. Doesn’t even need his full drum set.

Here the whole tissue of the compositions relays on his creativity and spatial imagination. Together with pianist they hold the line between them on which vocalist and trumpeter can walk like on the footpath and play whatever their hearts tell them to.