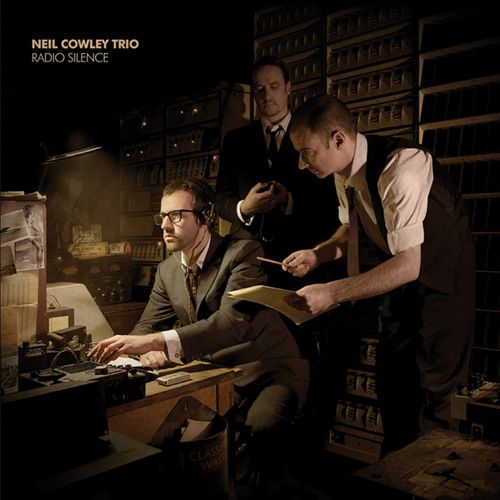 Once I heard Neil’s Cowley trio live they got me immediately and I kept digging back to the band’s beginnings with rapid fire speed. First 2 albums show the potential and leader’s charisma straight on, but remember I went there through the kitchen door ,starting from the latest Mountain View and later on its Live Montreux version CD. But I live it now for the next issue , they are both fresh and can wait a little ,when the real brain breaker is their 2011 Radio Silence recording.

This is where it all started. From this LP the band offers constant end established sound with recognisable sound . Cowley’s lead is obvious here ,but like with EST his domination comes from the power of his piano and it doesn’t limit his rhythm section in any meaning , leaving them all freedom and creativity they only would like to sparkle to make it even more rich and consistent. Neal’s lines are clear and melodic , repetitive motives are served alternately with slow lyrical breaks or interludes, like in Monoface and Stereoface – two pieces with extremely different dynamics , but similar sense of humour building the core of both.

First reminiscences EST’s from the Gagarin’s Points of View with its unstoppable galloping progression. Similar feelings come with Gerard – wonderfully twisted theme, full of changes, music jokes and joy. Watching them playing that on the stage made me understanding the whole concept of this great joy of making music together. Perfectly shared from the watching audience.

Massive passages like from great piano concertos are weave with burlesque tissue, like in A French Lesson. Other crazy titled tune Vice Skating is wonderfully rich waltz with changing tempos and incredible under-skin drive – coming from brilliant section collaboration, when seemingly on the surface not that much seems to go. Desert to Rabat is another piece of music which is like an open book .All trio contributes to build it up and you can see how it grows all the time . And you also have the sense of direction into which it could be taken every moment if they only liked to .

They make it look so easy like a snooker final in the hands of professionals, when we all know that it is not easy to cue the ball right. Hug the Greyhound is another example with such a workshop like appearance to the listener. Carefully written with brilliantly given space for everyone to show its bests it makes you believe it is pleasurable slide down ,without showing the real level of difficulties behind the score.

Closing Portal starts as a calm ballad ,but it soon turns into the wavy kind of saying good bye. At it is exactly the essence of their style. They are vivid, clever and unpredictable. Pure joy to listen as it always was an issue with an Esbjörn Svensson Trio. This Trio is a gate to the heavens for those who are adventurous enough to step in .