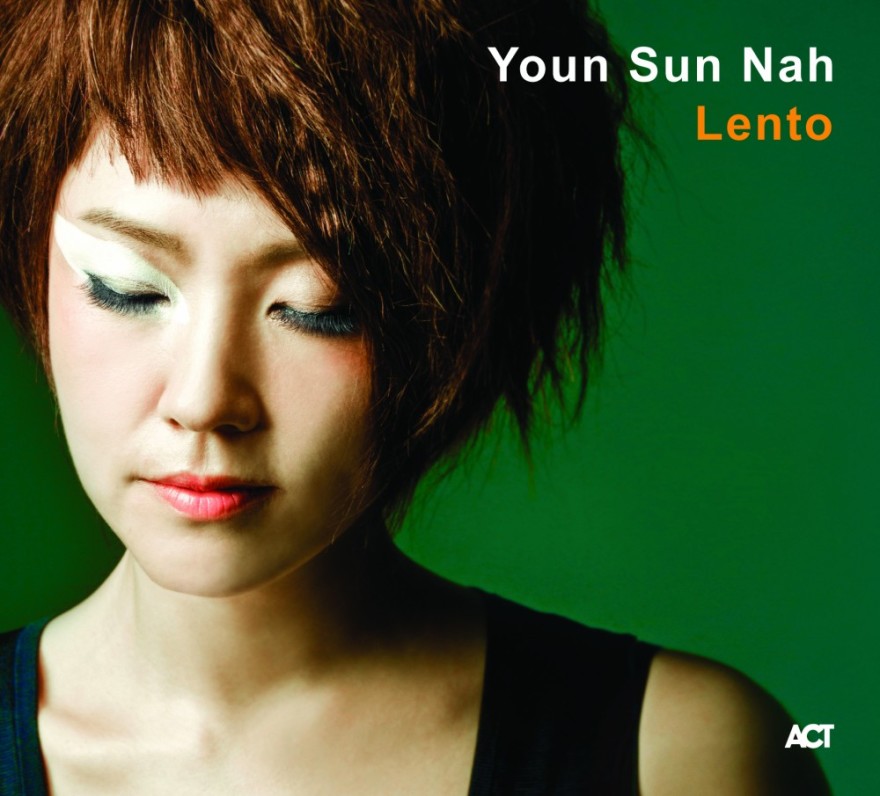 The Korean singer Youn Sun Nah has already been presented here before. Those who read these pages know very well how I respect her artistic qualities. Lento is her most recent release, just launched in May, so truly hot and as fresh as it only can be. Three years passed since latest and reviewed here Same Girl recording. Lento is her 3rd in the Act catalogue and is also recorded with the same accompanying musicians. Her regular partner she also performs duo with – Ulf Wakenius on guitars , wonderful Lars Danielsson on bass & cello and Vincent Peirani on accordion & accordina with Xavier Desandre-Navarre on percussion.

The repertoire here, as a lot had been set up more like on her label’s debut Voyage recording, than being rather an extraordinary songs extravaganza as the previous recording mentioned. As always with her projects careful match of collaborating personalities brings a final quality to the mix. These are not just scores which would be the same if other musicians had been hired to full fill requests. And she knows it very well – she used to lead other squads, other days, back in France and her motherland too.

I mentioned Voyage here not accidentally as when it comes to the order of the songs are presented with you can see the whole concept she got in mind and perfect control over the mood.

Opening Scriabin’s Lento with her own lyrics take us to the land of reflection with relaxing Ulf’s accompaniment, their well proven over the years formula. Her own Lament after stays in the mood ,but with decisively spoken lyrics it posses an intensity of the protest song. Trent Reznor’s Hurt slows things down and changes perspective nicely. It is hard to forget Johny Cash’s singing the same tune in the end of his days,  even if one is not a fan of him – it is deeply heart touching confession song finally ending as reconciliation with human fate. Her approach deals with his statement gently setting the focus on the importance of the things in life rather than on their absolute.

Two other scores credited to Peirani are exploring in a beautiful way the harmonies between Youn’s voice and his accordion , which he is playing like no one else, in a very individual way. Wakenius’ Momento Magico ,full skat show off with guitar bravado is their famous stage hit. It fits between two above perfectly in the case of building drama. Same can be said about Jones’ Ghost Riders In The Sky in which she takes a chance to drag out all of her complex vocal artillery to win the battle again. No doubt then the following Waiting from Cecile Norby’s repertoire will fit the bill perfectly to set the mood back up. Personally I love Cecile’s version the most, at least Lars had written it with her voice in mind, but Youn’s version posses its own charm of course.

We have got here one traditional Korean song as well, which she is always putting in between a lot. It is so nice to hear that, as harmony on those scales are so different from anything we are used to in Europe. The last piece, on this all together excellent recording , called New Down is another of her own and its Medieval harmony reminds me a lot of John Downlads’ composition. It is a very kind and charming way to say goodbye.

On the top of good things about this record I can add that the ACT label is offering it as the 180gr high fidelity pressing in premium packaging with the CD inside as a bonus for 20 Euro to us. We couldn’t ask for more really, could we ?