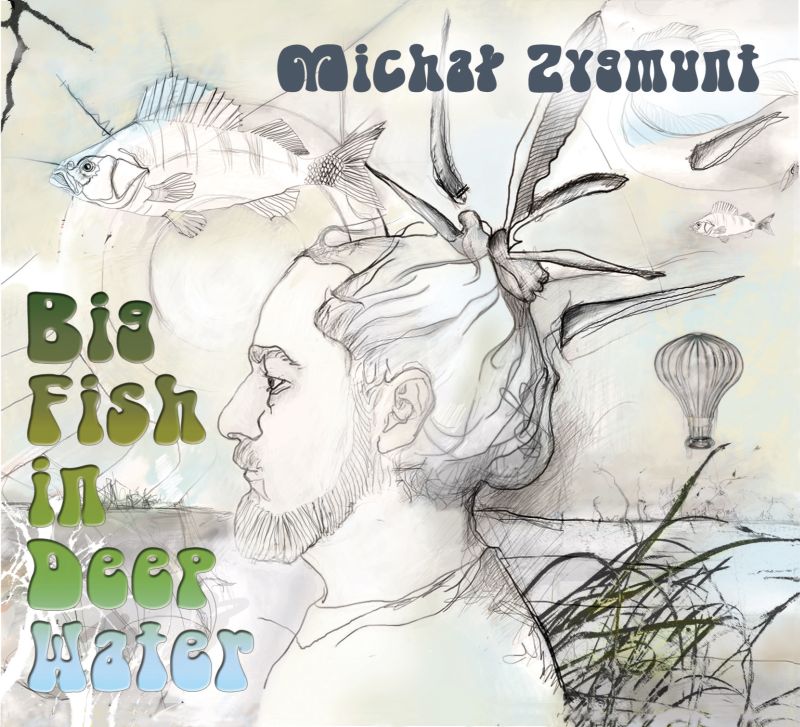 Latest recording from guitarist Michal Zygmunt is so fresh as fish only can be. Just picked up when it jumped out of water to launch shop shelves in middle Feb this year. This is a third disc in artists portfolio and I dare to say definitely the best. Albeit so consequent to what we already heard from him till date remains most ambitious project due to its complexity.

Zygmunt is properly educated jazz musician, but what counts more here he is very open minded explorer. Vast range of interests keep spicing up his notes. Inspirations come from every directions. I am not saying it is eclectic achievement in any meaning. More like its sparklingly blossom talent capable to blend different worlds together and make it its own language.

He’s been always deeply rooted in ethnic climates and kept travelling “around the world “ with his ears wide opened. Not only digging deep into his own origins which remains closer to Eastern Borderlands where his ascendency belongs than notoriously nomadic Lower Silesia when he finally decided to live.

Neither to say he took every lesson he could to develop his own sonic universe. His guitar is always telling stories which are simple ,but catching your soul. Here the core of the sound sets on Hawaiian like sounding strings. Tunes sound familiar. Some are quoting well known folk songs like track  But at Sunday immediately recognisable to every one who grown in Poland , almost like Green Sleeves are to native Brits. However clever bass riff around which floating trumpet makes its appearance bring it closer to opening of Trane’s A love Supreme rhythmic figure than the song with strictly ethnographic origins.

Opening Oder flies high on lovely and simple brass repetitions cascading over spatial and same frugal percussionist work ( Artur Dominik ). Similar Balkan background makes a core of following Why him? where progressive rock like guitar keeps dialoguing with trombone laments ( Tomek Kasiukiewicz ). Rhythm becomes more Afro in structure and stylistic starts to be more thickened .All reaches drum and base aesthetic at some points with modulated sounds here and there and ambient ,spatial soundscape.

Getting closer to Chromosomos like sound , the band from which few players originated and well know each other. Lovely, lovely and Swing are quiet ballads, both beautifully written with strong narrative structure. When first contains some of the best brass solos on this session ,second is pure finger work sounding almost like American Ray Cooder’s stories, mixed with Richard Leo Johnson’s up tempo tales which are too hot to be said using slower words.

Breaking up Kalina is some wonderfully looped brass choir playing its melancholic motif over percussion monologue occasionally joined by gentle aliquots coming out of leader’s guitar. Theme wanders lazily ,breaks and finds his way again, progressing into something different with every repetition.

Closing piece, With and against the Wind, played all with Zygmunt’s resonator guitar very close to mics changes direction once again on the very end bringing music closer to rhythm and blues tradition that it was possible to hear before. Here is lots of mixed personalities who brought a lot into this project. Some inspirations might look obvious, but then in blink of eye you lost again and trace from beginning. That’s wonderful, deeply emotional and intelligently played record which visits my spinner frequently as its charm put a spell on me.

All material sounds fantastic and had been recorded on the go with no post production and cuts during three separate sets. It is a big fun to follow changed set ups when you listening. All remains perfectly positioned and the space had been sketched breathtakingly during these sessions. Hard to say how much had been written in score as it is obvious that musicians interact spontaneously, particularly brass, and I wonder if I would ever hear exactly the same music if was  following band on the road. Definitely not.

This music is pure joy and I would recommend it to everyone with deeper sense of Trans as almost everything is there. From tribal steps which turning into dance to Nordic coldness and massive airy landscapes ala Nils Peter Molvar. And from your grandmother’s lullaby to Jewish festive spirit.